The Per Anger prize goes to Abdullah al-Khateeb in Syria 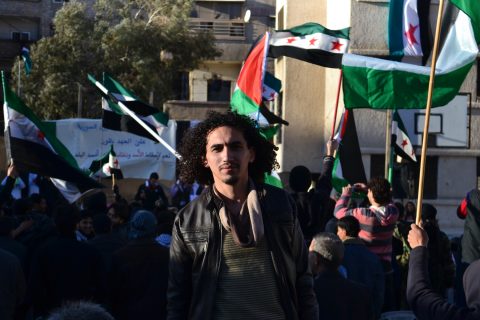 The Per Anger prize goes to Abdullah al-Khateeb in Syria

In July he survived an attempted assassination; now he is to receive a Swedish government prize.

The 2016 Per Anger prize is being awarded to 27-year-old Syrian-Palestinian human rights activist Abdullah al-Khateeb, for his brave struggle for human rights in Syria.

Every year the Living History Forum awards the Per Anger prize, on behalf of the Swedish government, to a person who has shown great courage and initiative in striving to promote democracy and humanitarian efforts, without any thought of personal benefit.

The 2016 Per Anger prize is being awarded to 27-year-old Syrian-Palestinian human rights activist Abdullah al-Khateeb, for his brave struggle for human rights in Syria. In a war-torn country, caught in the crossfire between conflicting parties, he documents abuses, mediates between different groups and acts as the voice of the most vulnerable. With his life constantly on the line, his work perpetuates the spirit of Per Anger.

« I’m not even sure I will still be alive in five or ten years’ time. But I am sure that I will carry on working, because I believe in what I do. And I will continue to use all of the non-violent methods open to me », says Abdullah al-Khateeb.

Since the uprising against the dictatorship began in Syria in 2011, Abdullah al-Khateeb has been a strong voice in the peaceful protests for democracy and human rights. Abdullah has worked with a number of different education projects relating to international law, human rights and democracy. As a result of this his life is constantly under threat, and he now lives in hiding in Syria. He has avoided two attempted kidnappings and was seriously wounded in a failed assassination attempt; in addition his father has been imprisoned because of his activism and his brothers have been forced to flee to Europe. Abdullah al-Khateeb is also one of the founders of the Palestinian League for Human Rights – Syria (PLHR), a network that monitors and documents the situation of Palestinian refugees in Syria with the aim of promoting the rights of stateless Palestinians.

The Per Anger prize will be awarded at a ceremony on Thursday 20 October at 13.30. Swedish Minister of Culture and Democracy Alice Bah Kuhnke will be present to hand out the prize.

Also present at the ceremony will be Salim Salamah, director for the PLHR and a colleague and childhood friend of the prizewinner. Salim Salamah lives in exile in Malmö and will be available for interviews in Stockholm on 18 October.

Read the press release in Arabic.pdf