Posted by Kristin Williams on February 21, 2014 in Syria 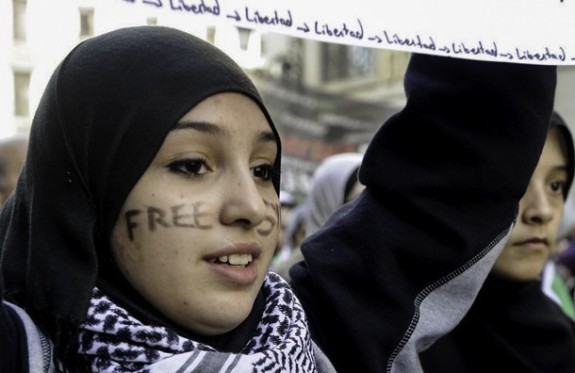 A young women demonstrates against violence in Syria. Women have led protests, delivered humanitarian relief, documented human rights violations, and negotiated with local and national decision makers, among other activities.

They move carefully between constantly changing checkpoints, where they’re often harassed. Extremists have been known to target female activists—beating them for not dressing conservatively enough. Or they may be detained. It happens frequently, especially if their activities are known to the government authorities. Even if not directly targeted, they live and work under constant shelling and deprivation, lacking food and water, and are often unable to communicate with activists a few neighborhoods away.

Yet, since the uprising began almost three years ago, Syrian women have demonstrated exceptional creativity and resilience. Despite their heroic efforts, these leaders have received too little attention from policymakers and the media and have not been fully consulted as part of the ongoing negotiations.

Here are 10 ways Syrian women are building peace and democracy in their country.

Women were among the first to take to the streets in March 2011. Though it’s become increasingly dangerous, many have continued these efforts. For instance, young women in Qamishli campaigned for disarmament, hanging posters throughout the city and organizing support via Facebook.

As acts of civil disobedience and to draw attention to the suffering in the country, women have glued shut the doors of government buildings and put red dye into public fountains so the water resembles blood. They’ve held banners outside of Islamic State of Iraq and the Levant (ISIS) centers that say, “You’re not going to change our life.” Side by side with men, they’ve kept the revolution in touch with its nonviolent, democratic roots.

Women are seen as less threatening, so they’re often able to transport needed supplies through checkpoints without being searched. An activist who attended one of Inclusive Security’s workshops last year lived 60 km from Aleppo and commuted each day to work. When her hometown was shelled, she smuggled medical supplies from Aleppo in her bags.

Later, when the city was under Free Syrian Army control, her sister publicly called the local councils to account when the aid supplies they claimed to be distributing didn’t match up with what families were receiving. In this way, she ensured families didn’t find themselves short on much-needed food or medicine.

Many women are also involved with the Local Coordination Committees (co-founded by prominent female activist Razan Zeitouneh). The LCCs, beyond being the primary organizers of continued revolutionary activities, are administering relief and other services in many liberated areas.

Most schools inside the country were government-run and have been closed for the duration of the conflict. If it weren’t for the many temporary schools established by women, traumatized children would have nowhere to go. Women have also created art therapy and other programs for psychological healing for citizens of all ages.

For instance, through her Foundation to Restore Education and Equality in Syria, Women Waging Peace Network member Rafif Jouejati has set up “Jasmine Tents,” safe areas for women inside the country to recover from trauma and learn new job skills.

In addition to her work with the LCCs, attorney and activist Razan Zeitouneh founded theViolation Documentation Center to monitor and report on kidnappings, detentions, disappearances, and murders by armed actors in Syria. Zeitouneh was vocal against both the government and ISIS, which forced her into hiding near Damascus for much of the last year. Her team was one of the first to report on the chemical weapons attack last August.

In early December, she, her husband, and two other activists were abducted; their whereabouts are unknown. The VDC continues to document and draw attention to the situation on the ground.

In April 2011, 2,000 women and children blocked a highway in Banias and successfully demanded that hundreds of men who had been rounded up in neighboring villages be released by the government. Since that early protest, women have been leaders on this issue (Rima Fleihan is in charge of negotiating it for the opposition in Geneva). Syrian activist Kefah ali Deeb has said: “The case of the detainees—our families and friends and neighbors who are detained—is more important than all political cards.”

Women have also negotiated cessation of hostilities between armed actors on the local level in order to allow aid to pass through these zones. In Zabadani, a Damascus suburb, a group of women pressured the local military council to accept a 20-day ceasefire with regime forces.

Rather than wait for a democratic transition at the national level, Syrian women are busy promoting local and municipal elections. Since the country has experienced dictatorship for 40 years, one woman in a town near Idlib is raising awareness of what free and fair elections entail. She’s working with citizens and candidates to explain the electoral process, curtail corruption, and ensure voters know their rights and responsibilities.

In Aleppo, female activists also lobbied for women to be guaranteed at least 25% representation in the preparatory committee for local and provincial councils, half of the nominations for candidates, and 25% of the seats in the final election.

To counteract the prevalent narratives of extremism and sectarianism, women have utilized different platforms to disseminate a message of peace and reconciliation. In Qamishli, students held festivals to promote peace and coexistence between Arabs and Kurds. Women Waging Peace Network member Honey Al Sayed co-founded Radio SouriaLi, which broadcasts on the internet to bypass censors and reach Syrians inside and outside the country. The organization promotes civic engagement, community development, and responsible citizenship, under the motto “Unity in Diversity.”

The Day After Project, vice-chaired by Women Waging Peace Network member Afra Jalabi, convened a series of meetings to outline a plan to reconstruct Syria and establish democracy once the country transitions out of conflict. They published a report with recommendations for reforming the security sector, drafting a new constitution, establishing transitional justice mechanisms, setting up free and fair elections, promoting the rule of law, and rebuilding the country’s infrastructure.

Inside Syria, small groups have gathered to lay out similar roadmaps. Last year, an organization in Qamishli brought together women from different ethnic and religious groups to discuss constitutional reform, especially as relates to family law that discriminates against women. The Syrian Women’s League, as part of a Coalition of Syrian Women for Democracy, conducted a comparative assessment of constitutions in the region to establish a set ofguiding principles for a new Syrian constitution.

Eight women are participating on the opposition’s negotiating and technical teams, while two women are on the regime’s delegation. The female delegates at Geneva are in charge of important portfolios like negotiating prisoner release and humanitarian access to Homs. Read more about them here.

10. Gathering in parallel to the negotiations to demand broader inclusion

Forty-seven prominent women leaders gathered in Geneva in mid-January to develop and present recommendations to UN Special Envoy Lakhdar Brahimi. In addition to calling for an immediate ceasefire and humanitarian access, they asked that women make up at least 30% of all negotiating teams and demanded a new constitution that guarantees equal citizenship to all Syrian people.

Similarly, the Syrian Women’s Forum for Peace brought together a diverse group of 60 women in Damascus to develop a Syrian Women’s Charter for Peace. It, too, goes beyond a cessation of hostilities to call for safe refugee return, human rights protections, and constitutional reform.

Kristin Williams is Writer and Program Associate at The Institute for Inclusive Security, where she strengthens women’s leadership in the Middle East and North Africa and makes the case globally for women’s substantive participation in the peace and security decisions that affect their lives.