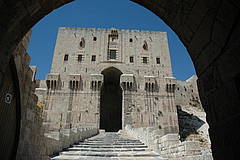 In light of escalated violence in the vicinity of several historic urban areas in Syria, the Director-General reiterates her appeal of 30 March 2012, to all parties involved in the conflict to protect all Syrian cultural heritage.

UNESCO is particularly alarmed over reports of heavy fighting in Aleppo, which ancient city is a World Heritage site. Strategically positioned on historic trade routes linking East and West, this ancient city has conserved an astounding monumental heritage reflecting the diverse cultures of the peoples that have settled here over millennia including the Hittites, Assyrians, Greeks, Romans, Umayyads, Ayyubids, Mongols, Mamelukes and Ottomans.  The ancient city of Aleppo has been inscribed on the World Heritage List since 1986.

Owing to the volatile security situation, it has not been possible to assess the extent of the damage to the ancient city of Aleppo and several other World Heritage sites including the Crac des Chevaliers, Palmyra, the Ancient Villages in Northern Syria and Damascus.

In the current context of civil strife, UNESCO is also particularly concerned about the risks of looting and pillaging of cultural property. As part of its efforts to mobilize the international community for the protection of Syria’s cultural heritage, UNESCO has alerted the World Customs Organization, INTERPOL, as well as Syria’s neighbouring countries to the potential threats of illicit trafficking in Syrian cultural objects.  The Director-General also contacted the United Nations Secretary General and the Chairperson of the Security Council to bring the attention of Kofi Annan, the Special Envoy for the United Nations and the League of Arab States, to the importance of ensuring that the provisions of the international conventions regarding protection of cultural property are respected, especially the 1954 Hague Convention for the Protection of Cultural Property in the Event of Armed Conflict and the 1970 Convention on the Means of Prohibiting and Preventing the Illicit Import, Export and Transfer of Ownership of Cultural Property. UNESCO is in close contact with the UN Resident Coordinator in Damascus concerning the situation.

The Director-General urges all parties to respect and protect Syria’s great cultural legacy, which constitutes a source of identity and fulfilment for its people, and to abide by their international obligations in the area of culture.