#5YearsWeFled: How Our Journey Began (Part 1) 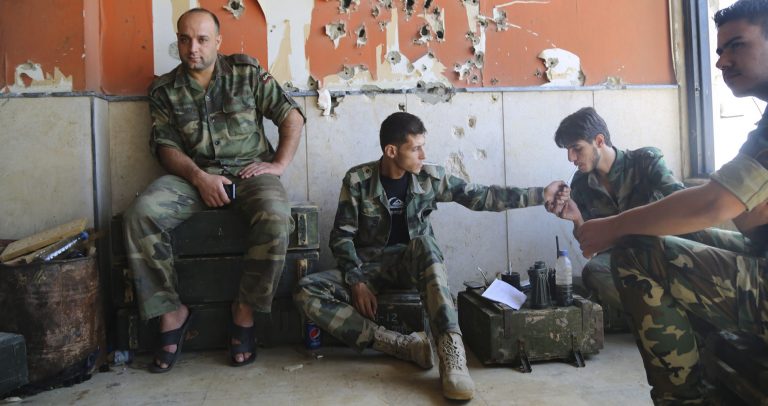 In this photo taken on Wednesday, Oct. 14, 2015, Syrian Army soldiers rest during fighting in Jobar, Damascus, Syria. Backed by Russian airstrikes, the Syrian army has launched an offensive in central and northwestern regions. (Alexander Kots/Komsomolskaya Pravda via AP) RUSSIA OUT

The series #5YearsWeFled is a collection of interviews with a Syrian lawyer Ayman Jalwan. It highlights the difficult choice that Syrians face – between dying in a war zone that the country has become after five years of conflict, or fleeing the land they love with no hopes of imminent return

Last year, Ayman Jalwan and his wife said goodbye to their families and joined the large waves of citizens leaving the country. Their first country of transition was Turkey. They then crossed the cold Mediterranean waters to enter Greece. Through smugglers in Eastern Europe, the couple reached Germany, which they had heard had been most generous to Syrian refugees. Over a series of accounts, Ayman Jalwan explains the decision to leave, the trials he and his wife encountered along the way and the consequences of their decision.

This is their first entry:

I avoided the draft in my country, and everyone who is here from Syria faces the same situation. Everyone! If you see anyone, young people – aged 18 to 42 – this is an issue for them. But one week ago, Bashar al-Assad passed a new law that if you are older than 42, you have the option to go serve in a special group in the Syrian Army for people who want to help to fight the terrorists. So people think, “Ok! I have a choice! It’s like I have a choice!” So sure, it’s like you have a choice, but the intelligence forces or the police are then coming to you and saying, “Why aren’t you going to this special group?” So on the one hand, it’s my choice. On the other, you hear “Now – go!” And you’re gone!

That’s what’s happened with my brother. But I don’t know what he’s doing now because I lost contact with him. So this is what happens. My brother is 42.

In Syria, so much is dependent on the many different religious groups. The Sunni make up the majority of the population of Syria. The rest are Shia, Alawi and Christian. Our president is Alawite. The Alawites are very close to the Shia groups that rule Iran and Iraq. All the groups are different, but of course Sunni, Shia and Alawite all belong to Islam. There are differences among them in the way that there are differences in Christianity between Orthodox, Protestant and Catholic. The Sunni, Shia and Alawite all believe in one God, one Messenger, but there are many different ways to believe.

Before the war, if someone was at university, the government would give him the chance to complete his studies before doing compulsory military service. So like with me, I continued to study, and once I finished college, I went to work as a lawyer. This is before the revolution started; I finished my studies in 2007. Of course, as a lawyer, I was able to give the government good reasons for why I could not do my 18 months of compulsory military training right away. I asked for delays so I could finish what I was working on – I was just starting my career. But after a time I had used up my reasons, and really, I knew I had to go and do my service. But then the revolution started.

You don’t know what it means “to go to the army” during this war. I personally am not afraid of serving in the army. But I know I would have no chance to survive the experience now because I’m Sunni. The leaders of the Syrian army of Bashar al-Assad are all Alawi. You will not find a Sunni among them. Of course, they will say, “No, no, everybody here in the army is just ‘Syrian.’” But this is just talk. The reality is, they put Sunnis on the front line where the danger is. If you are killed, no problem. But if you are Alawi, no – you can’t put an Alawi in the line of fire. If you are Sunni? You will not survive. This is the situation there.

I have many friends who went to do their military service. The compulsory military service for someone like me who has a college degree is just 18 months. But many people are staying in the military now for many years, maybe five years. That person’s life is destroyed. There is a war. There are many Alawi who should be doing their military service, but we can see that it is not so. This is the situation in Syria.

How can I describe it? If you go into military service, you will die, of course. Or you will go missing, or be arrested by ‘Daesh’ [ISIS], or be killed by Bashar al-Assad. Because if Bashar al-Assad or anyone in the leadership hears from you any word, any word that you want to leave the army, he will kill you. He will give the order to kill you.

So after the start of the revolution, I moved from Homs to Deir Ezzor, because it was very dangerous in Homs. Homs had a special situation. There were many groups of Alawi living in Homs, and these groups stand with Bashar al-Assad. I’m Sunni, I’m from Deir Ezzor: My city is against Bashar al-Assad. Deir Ezzor was the one of the first cities that took a stand and said no to Bashar al-Assad.

So rarely would you see anyone in Homs who was from Deir Ezzor and a Sunni, because – wow – it’s very dangerous for them. So I moved to Deir Ezzor and stayed there for one to two years. Of course, I saw many things in the revolution, many people who went to wave flags at demonstrations. And I saw many people killed, people who were my friends and neighbors. Then Bashar al-Assad made the decision to send the army to Deir Ezzor and give the people there an ultimatum: Stand down or I will use military force against you. At first we thought it was just talk, just “blah blah.” No one could imagine that he would use tanks and planes against Syrians. No could believe that; no, of course not! Many people here are civilians, so no. This is in about 2011 or 2012.

After that, I was very careful. I have friends from the Alawi community. One of my good friends, his father is an officer in the army. My friend calls me – he knows that I am in Deir Ezzor, and he is afraid that I may be in danger. So he calls me and he says, “Ayman, please leave Deir Ezzor because I can tell you what I heard from my father—there has been a real decision to use military force. They will use everything they have against the people. So please go. I can’t speak on the telephone.”

It was a warning meant to help me. So I took my family, my mother and my brothers, and we left Deir Ezzor and moved to Aleppo, where at first it was peaceful.

And yes, after I left Deir Ezzor, Bashar al-Assad’s army struck the city with planes and tanks. You could see the tanks between the buildings, on the streets. Yes, I saw that. And who were they fighting? Their own people. And who is this fighting against me? This soldier, he’s my brother or my friend. I can’t go to war against him.

Ayman Jalwan, whose name has been changed to protect his identity, is a Syrian lawyer now living in Germany as a refugee. Interviews conducted by Claudine Weber-Hof.

This article was originally published by the Atlantic Council and is reprinted here with permission.

The views expressed in this article belong to the author and do not necessarily reflect the editorial policy of News Deeply.