Syrian students and academics scattered by war have had their careers and education disrupted. We spoke to the founder of the Jamiya Project, which is trying to reconnect Syrian academics to refugee students through blended online and in-person learning.

SYRIA’S HIGHER EDUCATION sector has been wrenched apart by the war. Once-flourishing universities have lost professors, students and facilities to violence and the exodus of 5 million people from the country.

Now scattered across the region and beyond, many refugees are unable to access local universities, whether as students or academics.

Ben Webster was working for the International Organization for Migration (IOM) in a refugee camp in Jordan in 2015 when he developed a plan to bring these academics and students back together through online courses and in-person tutoring. 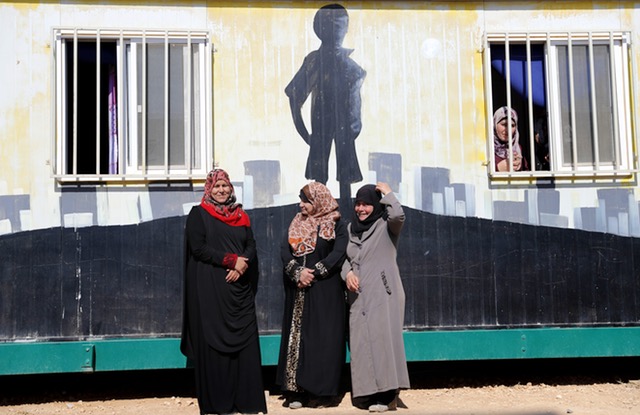 The result was the Jamiya Project – which last July piloted its first course, overseen and taught by Syrian academics in exile for Syrian refugees in Amman and Zaatari camp in Jordan. The course, Introduction to Applied I.T., was delivered and accredited by the University of Gothenburg in Sweden. The 29 students had access to Syrian academic mentors and on-site tutors in addition to the online course.

Funded by the Open Society Foundation, Asfari Foundation and private philanthropists, the Jamiya Project is now developing a foundation course and working to further integrate social media platforms into course delivery. Refugees Deeply spoke to Webster about what they learned during the Jamiya pilot and his aspiration to develop a blueprint university in exile.

Refugees Deeply: Why did you set up the Jamiya Project? What specific problems faced by Syrian students and academics are you trying to address?

Ben Webster: While I was working for IOM in Jordan, I ran a workshop on how to use peer-to-peer technology in humanitarian aid at the 2015 annual festival of a group called OuiShare. It was clear one of the big challenges was access to education, and particularly access to higher education. The latest report from the E.U. at the time said there were up to 100,000 Syrians who couldn’t access higher education. At the same time, there are several thousand Syrian academics who have left Syria.

Having previously worked on the sharing economy and peer-to-peer technology in the U.K., this presented a similar problem to what Airbnb and Uber are solving, in that there’s a lot of demand for something but difficulty accessing supply. Technology can try and fill that gap by reconnecting demand and supply, and realize the latent capacity of Syrian academics to provide solutions for Syrian students.

In a crisis like Syria, the whole academic community is displaced, not just the students. They lose their infrastructural and institutional backing. How do you replace Syrian higher education institutions and infrastructure and what needs to be put in place to restart that higher education network? That’s what we’ve been working on for the last year.

Refugees Deeply: Why did you focus on access to higher education?

Webster: It’s unusual for a humanitarian crisis for that problem to be so apparent. The classic perception of dealing with humanitarian crises is dealing with lower levels of education. Syria is unusual in that 26 percent of high-school graduates went to university before the conflict. The average proportion of the refugee community worldwide going to university is 1 percent. So that’s a huge mismatch. Syria is probably the first country with such scale of lack of access.

But this is not just specific to the Syria crisis. There are people who want to access higher education in refugee communities around the world. Over the coming decades, this unfortunately will be a trend we’ll see in future humanitarian crises, and the humanitarian community will have to adapt to it. There will be better-educated displaced populations because of the increase in access to education around the world as well as the involvement of middle-income countries in crises, whether due to conflict or climate change. 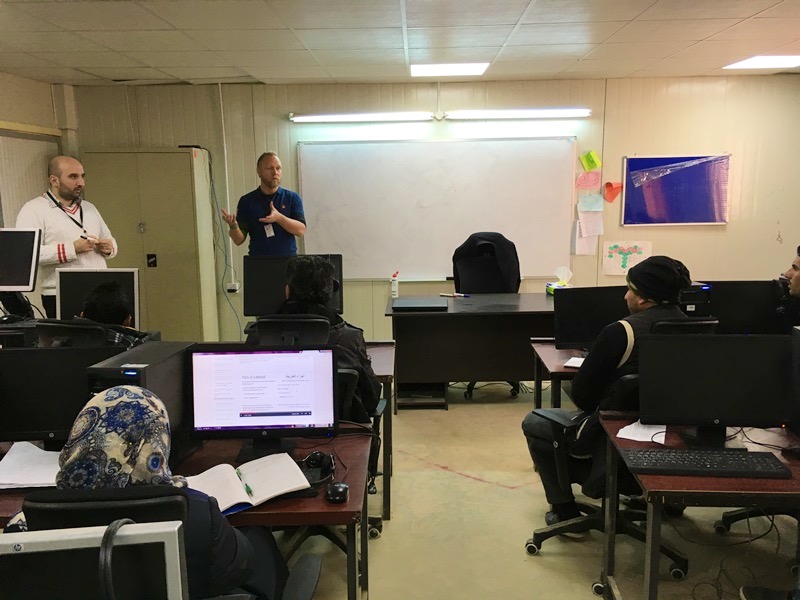 Refugees Deeply: How did you decide on the teaching methods, combining in-person and online learning?

Webster: By talking to people working in online education and Syrian academics. We also did an open online survey targeted at Syrian refugees, which got around 680 responses. I.T. and computer programming were the top requested subjects to come out of that. We also got some interesting feedback about why people were unsure about online education, which they did not perceive as having proper accreditation. When you’re a refugee in an uncertain situation, having a certificate that is recognized in your area and outside is very valuable.

So we set out this model: A small team of Syrian academics worked with a European university – the University of Gothenburg – to develop the course; the materials are hosted on a site called Edraak, an initiative of the Queen Rania Foundation in Jordan based on open edX software. Alongside that, we felt it important to include face-to-face elements, partly just intuitively knowing the social side of university is important. And the evidence also shows that if you have teaching assistants on the ground assisting students with online courses, the dropout and completion rates are much, much better.

Refugees Deeply: What lessons have you learned about this blended model through the pilot? Have you had to tweak it at all?

Webster: There are lots of things we’ve learned along the way. The most interesting thing for me was the development of social media through the course. We started off assuming that the only platform would be Edraak, but quite quickly realized one of the most efficient ways to communicate with the students was through WhatsApp. The students valued having personal connections with their tutors, and could develop that through a platform that they are already familiar with and which provides you with a quick response. What we’re trying to find out now is whether we can target particular aspects of pedagogy – the initial understanding of content or application of knowledge – through a blended setting, and what works best online or via WhatsApp.

Another thing we’ve learned is to invest a bit more time and resources in providing training for our instructors on blended instruction, because it is an unfamiliar concept to a lot of academics and teachers worldwide, let alone those who have had a few years disrupted by conflict.

Overall our pilot has been very positive. We finished with a student retention rate of 65 percent. From the students’ feedback, a large part of that is because they are coming together and learning as a group, developing a friendship group and able to ask questions or speak to a tutor face to face.

Refugees Deeply: You used the University of Gothenburg curriculum in the pilot, but do you foresee circumstances where you might want to adapt a university curriculum?

Webster: The standard does not need to change, but, as with any course, you want to make it relevant to the students’ situation. We’ve discussed a Java programming project as an immediate extension to this course, which could be a scheduling app or a registration system that one of the NGOs can use as part of their program. On the social science side, we’ve been looking at doing a Global Studies course with Gothenburg, which could be interesting for students to apply to their context, like environmental challenges in Jordan and in Syria.

Refugees Deeply: Was it difficult to secure accreditation from an international university?

Webster: Yes – and it’s still a work in progress – not just for us but for people doing online education more broadly. The way around it is that we worked very closely with Gothenburg, from the development of content to the examination.

Refugees Deeply: What challenges do you face to scaling up?

Webster: One challenge is how do we replicate quality using a blended model. When you take things offline – introducing people into the teaching and facilitation of the course – then it becomes very reliant on personalities and the individual involved. Guaranteeing and securing the quality of that over 100 sites, for example, would be very difficult.

The ultimate vision would be to develop a blueprint university, which you can hand over to the communities involved.

Yet one of the exciting things is the potential of this model to replicate in other contexts, beyond the Syria crisis. The idea that you are trying to reconnect an academic network that has been displaced and open up higher education opportunities to people through that, that is applicable to future conflicts and disasters. The ultimate vision would be to develop a blueprint university, which you can hand over to the communities involved. Then it’s completely community-led, rather than having it centralized and directed by Jamiya Project. That’s what we’re always trying to strive for – proving that you can reconnect an academic network to the point that it’s replicable across other contexts.

Charlotte Alfred is managing editor of Refugees Deeply. Previously, she was a reporter for The Huffington Post focused on Africa, worked on documentaries for PBS Frontline and was English editor at Ma’an News Agency in the West Bank.