Following Trump’s executive order barring Syrians indefinitely from the U.S., Tania Karas reports on how its chaotic implementation hit one Syrian family who were already in transit as the order was inked. 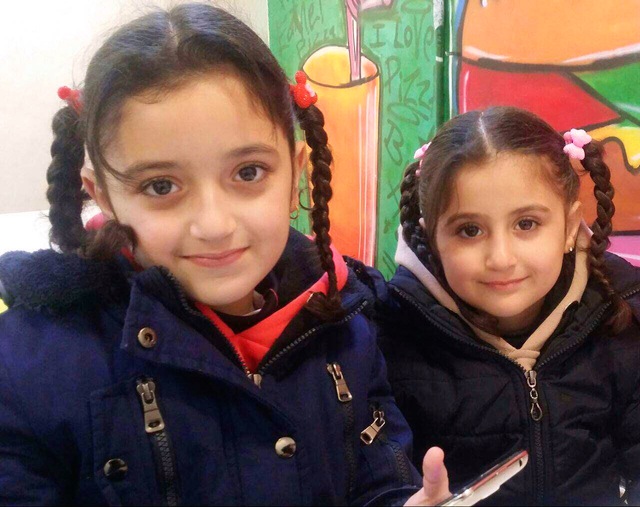 Hanan, 8, and Lian, 5, were meant to be reunited with their father, Fadi Kassar, last Saturday, after years of a meticulous procedure that legally qualified them for family reunification. But Trump’s ban barred them and their mother, Razan, from entering the U.S. Family Photo

CHICAGO – After two years apart, Fadi Kassar, a Syrian refugee living in Orange, Connecticut, was counting the hours leading to his reunion with his wife and two daughters last weekend. But President Donald Trump’s executive order barring refugees from entering the United States got in his way.

Kassar’s wife, Razan Alghandour, along with 8-year-old Hanan and 5-year-old Lian, were at the airport in Kiev, Ukraine, on Saturday, about to board their connecting flight to New York to reunite with Kassar after years living as refugees in Amman, Jordan. That is when the Ukrainian border officials told them their hard-won U.S. visas were now invalid.

Alghandour called Kassar via WhatsApp to share the bad news. After 12 hours in the airport, Alghandour and the girls were forced onto a flight back to Amman. The family was in a state of shock, with their dreams of restarting their lives together on an indefinite hold. They had qualified for family reunification, after undergoing an extensive process, including a meticulous security vetting procedure that all asylees entering the U.S. undergo.

“We couldn’t believe everything we were preparing for in America was ending,” Kassar said. “We have papers. We didn’t make any mistakes. Everything was totally legal.”

Yet the rules of the game had changed overnight. All it took was Trump’s signature.

The order, signed January 27, suspends all refugees from entering the United States for 120 days; bans all citizens of Iraq, Iran, Syria, Somalia, Sudan, Libya and Yemen for 90 days; and calls for extra screening of U.S.legal permanent residents with citizenship from those seven countries.

The pause is meant to allow various government agencies time to devise new measures of identifying travelers “with the intent to cause harm, or who are at risk of causing harm subsequent to their admission” to the United States – a nod to Trump’s presidential campaign promise to introduce “extreme vetting” of refugees. The order also cuts the number of refugees to be admitted to the United States in fiscal year 2017, from 110,000 to 50,000.

In response, protests erupted nationwide in airports where travelers were being detained upon landing on U.S. soil. Human rights and legal aid groups say Trump’s order discriminates against Muslims, as it targets Muslim-majority countries, and that it’s dangerous to both refugees and U.S. foreign policy interests. Several U.S. lawmakers tried to pass legislation to rescind the order, while four federal courts made rulings that temporarily struck down pieces of it.

The order could affect as many as 20,000 refugees slated to come to the United States over the next four months, according to the United Nations refugee agency, UNHCR. It disproportionately hurts women and children, as U.S. refugee admissions prioritize cases based on vulnerability.

Like all refugees hoping to be resettled in the United States, Alghandour, Hanan and Lian went through a lengthy approval process.

Typically, UNHCR selects the most vulnerable cases – single mothers and children, the elderly, the disabled and LGBTQ refugees – for resettlement to one of 28 countries. This excludes at least 90 percent of refugees. Following the filtering process, applicants seeking U.S. resettlement undergo multiple medical checks and security clearances – including biometric screening – involving 12 to 15 different government agencies. They are also extensively interviewed by U.S. Homeland Security Department officials.

The road to resettlement often takes two years or more. For family reunion candidates like Kassar, his wife and children, where one member already has asylum in America, it tends to be shorter.

Kassar’s own journey to the U.S. began in 2014. He spent a month in immigration detention before receiving asylum in late 2015. Three years after striving to provide his family with a stable future, the husband and father fell into despair.

Alghandour, Hanan and Lian were issued their visas early last week. By midweek, they had heard rumors of the refugee ban but did not know when Trump would sign the order. They set off on a frantic race against time to reach the United States, before the ban would come into effect. The earliest available flight to New York departed Saturday, with a connection in Kiev. They prayed for the best. But Trump signed his order Friday afternoon.

“We were so happy we were going to be reunited and for me to see my husband and my girls to see their father,” Alghandour said by phone from Amman on Monday.

“It was a big shock” to be deported from Kiev, she said, and to find out their U.S. visas were suddenly worthless. “My daughters’ hearts were broken. All of us were crying.”

It is still unclear what the promise to introduce “extreme vetting” means – or why it’s necessary.

The executive order states the United States “must ensure” those admitted to the country do not “bear hostile attitudes” toward it, do not “engage in acts of bigotry or hatred… including ‘honor’ killings,” and would not “oppress Americans of any race, gender or sexual orientation.” It does not outline how those things will be determined.

A dozen immigration and counterterrorism experts said additional vetting will do little, if anything, to boost national security.

“‘Extreme vetting’ is just a soundbite. It fits nicely into 140 characters,” says Hassan Ahmad, an immigration attorney in McLean, Virginia. “For vetting the forcibly displaced, the U.S. system is probably the best in the world. It’s the most thorough and has the most levels of checks.”

“This is all about politics and not about security.”

“This is all about politics and not about security,” says Benjamin, a scholar at Dartmouth University. “This is a manufactured crisis. It played to all kinds of fears and antipathies in [Trump’s] base. Our immigration systems have been excellent.”

Since September 11, problems of Islamic extremism in America have typically been homegrown, not from immigrants, Benjamin said. Furthermore, he said, the executive order may even invite extremist attacks because it “conforms depressingly well to the jihadist narrative about the U.S. being anti-Muslim.”

No immigrant or refugee vetting system is 100 percent foolproof, many experts said. Still, the United States already comes close. A recent study of extremist attacks in America showed that the likelihood of being murdered by a radicalized foreigner on U.S. soil is 1 in 3.6 million. And the chance of being killed in an attack by a refugee extremist is 1 in 3.64 billion. By comparison, nearly 12,000 people are killed by guns in America annually.

“The refugee vetting process has been shown to be safe, secure and effective, and was already enhanced in 2011,” said Devon Cone, a former resettlement caseworker for UNHCR who now works for HIAS, a U.S.nonprofit that protects refugees.

He also said several of the seven countries from where immigrants and refugees are banned may not be cleared after 120 days.

“I’d be less than honest if I told you that some of the countries that are currently on the list may or may not be taken off the list anytime soon,” Kelly said. “They’re countries in various states of collapse.”

This description fits many refugee-producing nations, including Syria, whose bitter conflict has produced nearly 5 million refugees.

On Saturday, Alghandour and her daughters returned to their apartment in Amman, a temporary home they thought they had permanently left behind, and tried to ease back into the lives they’d already bid farewell. Across the Atlantic Ocean, Kassar returned alone to a new apartment, furnished for a family of four.

“He has not been able to sleep since this happened,” said his brother-in-law, Sammer Karout, a restaurant and hookah-lounge owner who immigrated to America from Syria almost 30 years ago. Kassar, who is from a northeastern Damascus suburb under heavy bombardment, had been a car-rental agent in Syria and now works for Karout in Milford, Connecticut.

Money is a concern for the whole family. They lost $2,200 on airfares alone.

“I hope Trump will issue a new decision,” Kassar said on Sunday. “We can’t go back to Syria, and I can’t go to Amman. We are good people. I just want to see my children again.”

On Tuesday, the U.S. government announced that 872 refugees already “in transit” would be granted waivers to arrive in the country this week. Officials indicated that those on the list of seven countries, including Syria, would still be barred.

Despite this, on Wednesday, Alghandour and her daughters were told that they had been cleared to come to the U.S. and should arrive as soon as possible. They immediately re-booked plane tickets, hoping to finally join Kassar.

On Thursday evening, the mother and daughters landed at at John F. Kennedy International Airport in New York. They were briefly held up in security as their relatives waited nervously in the arrivals hall.

A few hours later, the girls’ uncle Karout sent a text: “Finally arrived. Everyone is happy!” 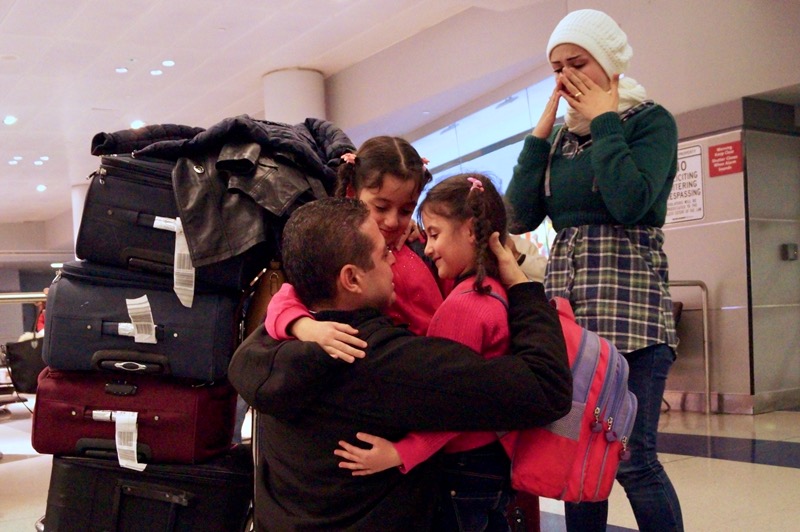 Fadi Kassar hugs his daughters as his wife Razan looks on after the family was reunited at John F. Kennedy International airport in New York City on February 2, 2017. (Bill Swersey/HIAS.org)

This story has been updated to correct the name of Hassan Ahmad  and with more information about the family’s arrival in the U.S.