‘As Syrians, We Need to Rebuild People, Not Countries’ – by Zaina Yagan

Orient Research Centre associate Zeina Yagan discusses one of the many dilemmas that has emerged for Syrians during the conflict: How does one bridge the deep, sometimes emotionally charged, divides in the Syrian community?

WHEN THE SYRIAN conflict began in 2011, I deleted my Facebook profile, thinking that real-life, face-to-face discussions counted for much more than my virtual life on social media. I convinced myself it would be a good break from the negative circles and from the regular disputes among Syrians on Facebook, which had become a platform for both supporters of and protesters against the Syrian regime to accuse each other of betraying the nation.

In the past six Facebook-less years, my life has changed completely. I left my home country of Syria and settled with my family in the cosmopolitan city of Dubai. I started a new job as a researcher. I established a new network, surrounding myself with friends from a variety of nationalities and backgrounds. I believed that all these changes and beginnings would help me live and work in peace, shielded from the divided Syrian community.

But that’s not what happened.

The more steps forward I tried to take in my life, the more I found myself entangled in the Syrian conflict. On every trip and vacation I took, people asked me where I was from, and I replied: “I am Syrian.” They always paid particular attention to me. They usually started discussing the Syrian crisis, to be courteous and show me that they’re aware and care. But sometimes it had the opposite effect, and I got very upset. For instance, when they would analyze scenarios as if they were politicians, or pose vague questions such as, “When does it end?” or “Do you think Syrian people can go back to normal after all the atrocities they have seen?” These are questions I don’t have answers to.

At times, I’ve asked myself why I have to go through all of this. I had the feeling that somebody was pushing me, pushing me to think day and night about the Syrian conundrum – and to find answers, to finally reach the light at the end of the tunnel.

After four years pondering this internal crisis and undertaking spiritual efforts, including taking philosophy classes, I started to reap the rewards. Since I cannot escape my Syrian heritage, I came to see my role as a – hopefully successful – mediator between the different cultures and mentalities of Syrian and non-Syrian people. I now have conversations with Syrians from different backgrounds, and we debate a wide range of topics. My aim is to build bridges between the different cultures. It’s about interculturality – that’s what I’ve been feeling passionate about recently.

But, recently, I’ve felt myself going back to square one. In a debate about the recent chemical attack, the flagrant carnage by the Syrian regime and its impact on the region, I was shocked to see that the scourge of the Syrian people reappeared in the discussion. I encountered the same narrow-mindedness, the same yelling and the same lack of respect for each other. Since the beginning of the crisis, many have said that Syrians were repressed and that’s why they lacked a culture of dialogue. Yet, we’re still not at a level where we respect other opinions. We don’t listen very well either.

It seems as if nothing has changed. Seven years later, the one thing I tried to escape when I left Facebook I now have to face in reality. It remains a dilemma: How do we discuss situations that prompt such highly emotional reactions at times when we need logic and reason the most?

It is true that what Syrians suffer, at home and abroad, breaks down every layer of logic. But we need to keep in mind that the Syrian government relies on the deep divides between the Syrian people who are left and are still capable of expressing their opinions. Frankly, it has succeeded in fragmenting much of the population ethically, ethnically and religiously. If we, the Syrian people outside of the country, continue to tackle these differences in a way that ultimately satisfies the regime, we will regret when the day comes when we give up Syria for good.

I have heard stories that are both devastating and inspiring at the same time. Stories about people who, at night, lost their loved ones under debris from an attack and yet still wake up in the morning, prepare breakfast and invite the survivors to share the meals.

Life goes on. Our main focus should be to keep encouraging this unique spirit of the Syrian people: to be there for each other; to stick together – to get us, the Syrian people, on the long road to healing. 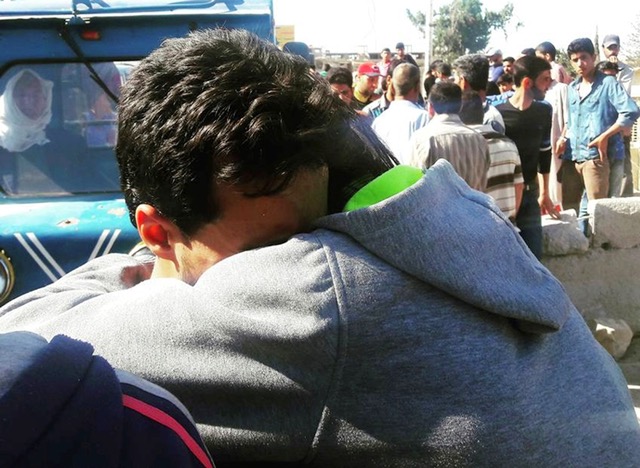 Two Syrian men hug each other as they prepare to leave the government-besieged Damascus suburb of Moadamiyeh, Syria. AP

Zeina Yagan is a senior associate at Orient Research Centre covering Russian affairs and its sphere of influence. Previously, she covered the Near East policy (Iraq, Lebanon), and she is the author of the book “The Iraqi Paradoxes.”