Snipers belonging to the Assad regime in Syria are shooting pregnant women and their unborn babies in a disturbing “game” of target practice, a British surgeon has claimed.

By Bonnie Malkin, and Ruth Sherlock in Beirut 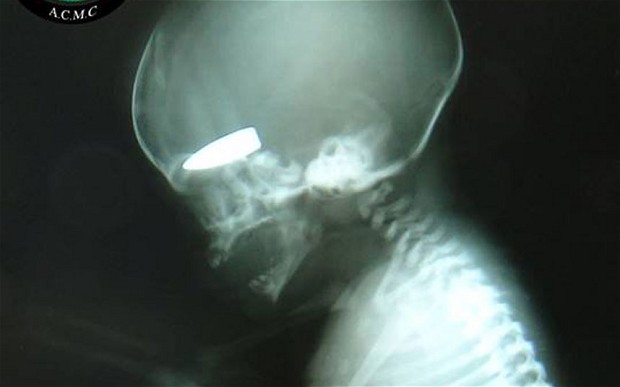 An x-ray purportedly showing a foetus with a bullet lodged in its skull from a Syrian hospital Photo: Aleppo City Medial Council

David Nott, who has spent five weeks volunteering in a Syrian hospital, said each day snipers would chose to aim at different parts of the civilians’ bodies as they ran from one part of the city to another to buy food and supplies.

“From the first patients that came in in the morning, you could almost tell what you would see for the rest of the day. It was a game. We heard the snipers were winning packets of cigarettes for hitting the correct number of targets.”

“The women were all shot through the uterus, so that must have been where they were aiming for… This was deliberate. It was hell beyond hell,” he told the paper.

Mr Nott, who has been volunteering in war zones including Bosnia, Libya and Sudan for 20 years, said at times, he found it difficult to cope with.

Speaking on Radio Four’s Today programme on Saturday morning, he said: « I can’t explain how horrendous the whole thing is. »

Mr Nott, who said he could not reveal the location of the hospital in which he was working, said he could not be certain which side the snipers were on but believed the were on the side of President Bashar al-Assad’s regime. He said he was told there were 72 snipers in total in the area, who were picking off civilians as they tried to cross from one city to another to fetch food.

« I was there for five weeks and I was exhausted at the end of it,” he said.

Pictures showing an x-ray purportedly of a foetus with a bullet lodged in its skull were provided by charity Syria Relief. Their authenticity could not be verified and the skull in the image showed no sign of damage from a high velocity bullet.

Mr Nott has recently returned from Syria, which he described as the most desperate of all war zones and the first place he had seen civilians, and especially pregnant women, being targeted. Mr Nott estimated that 90 per cent of the people he treated were civilians.

He also described terrible conditions in Syrian hospitals that lacked even basic supplies and hygiene equipment. He said local doctors worked under the threat of violence and some suffered from depression but were not willing to abandon their patients.

A vascular surgeon at Chelsea and Westminster Hospital who had volunteered in Syria before, Mr Nott said he saw little to no evidence of foreign aid reaching the places that badly needed it.

His grim account of life in Syria came as a military intelligence officer in President Bashar al-Assad’s regime was killed by opposition rebels.

Gen Jama’a Jama’a, the head of the Syrian military intelligence for the north-east of the country, was shot dead by snipers on Thursday during a battle with rebel groups, including men linked to al-Qaeda in Deir Ezzor.

Gen Jama’a was “martyred while carrying out his national duties to defend Syria and its people and pursuing terrorists in Deir Ezzor”, Syrian state television reported. His death, celebrated by rebels and opposition activists, severs one of the increasingly few ties of the regime to the north-east of the country.

In recent months much of Syria’s oil-producing Deir Ezzor province has fallen into the hands of opposition rebel groups.

Located close to the border with Iraq, and a prime smuggling route for fighters and weapons into Syria, the al-Qaeda-linked Islamic State of Iraq and the Levant (ISIL) and the Nusra Front have become powerful players in the area.

Gen Jama’a was appointed as the chief of intelligence in Deir Ezzor, a prominent and sensitive position, after serving a long and murky career for Assad’s regime.

The London-based Syrian Observatory for Human Rights said that dozens of rebels and government soldiers have been killed in fighting in Deir Ezzor.

It said that rebels from the Nusra Front murdered 10 soldiers they captured in the Rashidiyah district, where Gen Jama’a was killed on Thursday.

Dozens of people, meanwhile, were killed in fighting in northern Aleppo province yesterday.