Assad should go for the sake of the Syrian people, says Nick Clegg 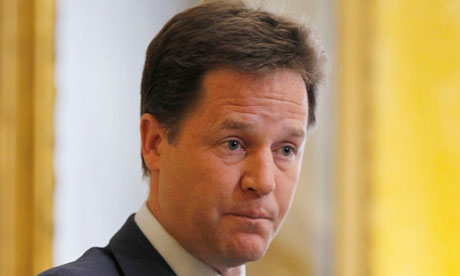 Nick Clegg said Syria was in the grip of a single family which continued to wage war on an an entire nation. Photograph: Sang Tan/AP

The deputy prime minister has said Syria‘s president, Bashar al-Assad, is as « irrelevant » to the country’s future as Colonel Gaddafi is to Libya.

In a speech on Monday afternoon setting out how he believed the UK should support developments in the Middle East, Nick Clegg issued tough words for leaders he acknowledged the west had once been wrong to support but should now turn their backs on.

Echoing new tough language from the US president, Barack Obama,towards Assad, Clegg said: « For the sake of the Syrian people, it’s time for Assad to go. He is as irrelevant to Syria’s future as Gaddafi is to Libya’s. »

He said while some regimes in north Africa and the Middle East had fallen, there remained urgent need for reform in Bahrain, while Yemen suffered a stalemate and Syria was in the grip of a single family which « continues to wage war on an entire nation ».

« Different states were always going to move at a different pace, and in different ways. Oppressive regimes were never going to tumble like dominoes. Nor were they going to change their ways overnight, » said the deputy prime minister.

« The picture is very mixed and there is uncertainty over where things will go next. »

Instead the UK stood « shoulder-to-shoulder » with protesters in all Arab countries: « We believe in the same things these activists are fighting for: freedom, self-determination, human rights, the chance for people who work hard to succeed. »

He was speaking as events moved rapidly in Libya with the prime minister returning from his holiday to monitor the rebels’ advances on Tripoli.

Clegg suggested the international community would be unlikely to unite to put together another UN resolution that would see military action to remove the Assads from power in Syria but welcomed the progress made through the EU to tighten sanctions on the regime.

Clegg was speaking very shortly after David Cameron made his ownstatement on developments in Libya, in which he refrained from triumphalism and emphasised how fragile he still believed the situation in Libya to be.

Clegg said the UK « should learn the lessons from Iraq » and that the rebels’ advance into Tripoli was merely the beginning.

« Today’s scenes should give heart to all of those struggling for their freedom … [But] Gaddafi’s departure will not be the end. It will be the beginning and we should not underestimate the challenges ahead, » he said.

« The advances made by the Free Libya Forces in Tripoli would have been unthinkable just a few months ago. Unimaginable, even, for the generations of young Libyans who have never known a world without Gaddafi. Now that world is within their reach.

« The momentum for change is breathtaking and, for the cynics who said change wasn’t possible, who had written off the Libyan uprising, written off the Arab spring, clearly, they were wrong. »

He added: « The decision to support military intervention in Libya was not one the UK took lightly. Particularly not by those of us who opposed the invasion of Iraq.

« We went to Libya with a clear humanitarian mandate. And tens, if not hundreds, of thousands of lives have been saved since. But, we also knew that inaction would have threatened the Arab spring as a whole.

« And now, as the colonel’s fate closes in on him, what message does that send to other dictators who ignore their people’s demands? »