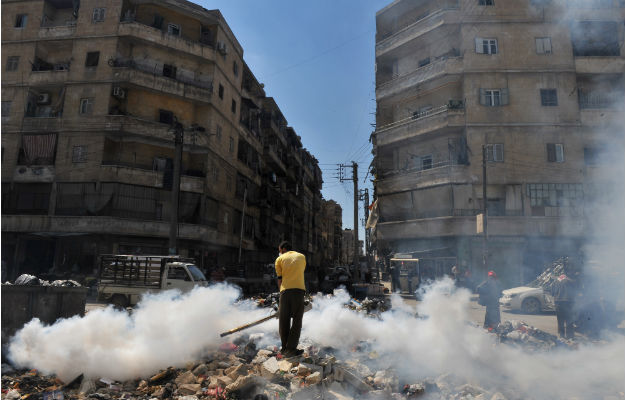 You’ve got to hand it to him. Bashar al-Assad may be a cruel and ruthless dictator, but he does know how to play his cards. His careful, incremental introduction of chemical weapons into the Syrian conflict has turned President Barack Obama’s clear red line into an impressionist watercolor, undermining the credible threat of U.S. military intervention. Despite Obama’s statement on Friday that « we’ve crossed a line, » Assad knows that the United States does not want to be dragged into a Middle Eastern civil war and is attempting to call Obama’s bluff.

More…
The Syrian regime’s subtle approach deliberately offers the Obama administration the option to remain quiet about chemical attacks and thereby avoid the obligation to make good on its threats. But even more worrying, Assad’s limited use of chemical weapons is intended to desensitize the United States and the international community in order to facilitate a more comprehensive deployment in the future — without triggering intervention.

The advent of chemical weapons use in Syria should not come as a surprise, and neither should the manner in which Assad has introduced them. The gory details about chemical weapons use are still forthcoming, but one of the first likely instances took place in late March at Khan al-Asal, a regime military facility under siege by rebels. Opposition reports and videos showed symptoms and effects consistent with a chlorine or phosphate-based chemical weapon, which the rebels claimed was delivered by a short-range rocket.

The Assad regime swiftly accused rebels of firing « rockets containing chemical materials » within hours of the attack, which helped outsiders suspect that a chemical-laden projectile had actually been used, and also had the effect of incriminating the usually slow-to-react regime. The chemical rocket attacked a specifically military rebel target at Khan al-Asal and the chemicals used were not highly lethal, although the recent reports from Israeli and U.S. intelligence officials have pointed to the use of more lethal sarin nerve gas.

This subtle introduction of chemical weapons fits the Assad regime’s established model for military escalation. Over the course of the conflict, each regime escalation has started with military necessity and expanded to brutal punishment of the Syrian population. Assad has established a clear modus operandi for ramping up the battle without triggering international intervention: toe the line, confirm Western inaction, and then ratchet up the violence further. At each step Washington’s hollow « we strongly condemn » rhetoric has validated the approach.

Assad’s forces began using heavy weapons to shell Homs in February 2012 because they could not dislodge the rebels with ground forces alone. From the regime’s perspective, military necessity demanded the relatively restrained use of artillery bombardment to soften rebel positions ahead of a ground offensive. Once Assad confirmed that artillery would not trigger an international response, the shelling expanded to target opposition civilian neighborhoods each day — without any attempt to retake these areas with ground forces.

When the Syrian regime’s ground troops became overstretched in June 2012, military necessity once again dictated escalation: Assad unleashed his air force. Assad did not have the troops necessary to respond to rebel advances in northern Aleppo and Latakia, and therefore employed limited helicopter strikes against rebel military targets. By August of last year, Assad had confirmed that his air offensive would not trigger a U.S.-imposed no-fly zone, which allowed him to deploy Syrian Air Force jets against rebel-held neighborhoods in Aleppo, punishing an innocent population for the rebels’ gains.