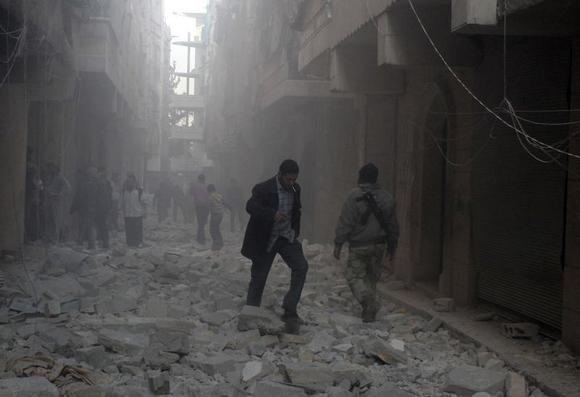 People walk on rubble at a damaged site after what activists said was an air raid by forces loyal to Syrian President Bashar Al-Assad, in Aleppo's al-Saliheen district December 23, 2013.

(Reuters) – The Syrian government of President Bashar al-Assad has received substantial imports of Iraqi crude oil from an Egyptian port in the last nine months, shipping and payments documents show, part of an under-the-radar trade that has kept his military running despite Western sanctions.

Assad’s government has been blacklisted by Western powers for its role in the two-and-a-half year civil war, forcing Damascus to rely on strategic ally Iran – itself the target of Western sanctions over its nuclear program – as its main supplier of crude oil.

A Reuters examination based on previously undisclosed commercial documents about Syrian oil purchases shows however that Iran is no longer acting alone. Dozens of shipping and payment documents viewed by Reuters show that millions of barrels of crude delivered to Assad’s government on Iranian ships has actually come from Iraq, through Lebanese and Egyptian trading companies.

The trade, which is denied by the firms involved, has proven lucrative, with companies demanding a steep premium over the normal cost of oil in return for bearing the risk of shipping it to Syria. It also highlights a previously undisclosed role of Egypt, Iraq and Lebanon in Assad’s supply chain, despite those countries’ own restrictions on assisting his government.

Both the Syrian national oil company that received the oil, Sytrol, and the Iranian shipping operator that delivered it, the National Iranian Tanker Co (NITC), are on U.S. and EU sanctions lists barring them from doing business with U.S. or European firms, cutting them off from the U.S. and EU financial systems and freezing their assets.

At least four firms from third countries that were added to the U.S. Treasury’s sanctions list for Iran when it was last updated on December 12 were punished specifically « for providing material support to NITC », the Treasury said.

« We have been very focused on targeting Iranian attempts to aid the Assad regime through economic as well as military means, » said a Treasury Department spokesman. He declined to comment on the specific activities described in the documents reviewed by Reuters but said companies and individuals had been added to the sanctions list for similar types of activity.

The cache of documents describing the trade between March and May this year was shown to Reuters by a source on condition of anonymity. Many details were corroborated by a separate Middle Eastern shipping source with long-standing ties to the Syrian maritime industry. Publicly available satellite tanker tracking data, provided by Thomson Reuters, parent company of Reuters, was used to confirm the movements of ships.

The documents refer to at least four shipments by four tankers named Camellia, Daisy, Lantana and Clove, each of which is operated by Iran’s NITC and, say the documents, carried Iraqi oil from Egypt’s Mediterranean port of Sidi Kerir to Syria.

According to the documents, Beirut-based trading firm Overseas Petroleum Trading (OPT) invoiced Syria for arranging at least two of the shipments and was involved in a third, while a Cairo-based firm, Tri-Ocean Energy, was responsible for loading Iraqi oil into at least one.

Both OPT and Tri-Ocean denied any involvement in the Syria trade, declining to offer an alternative explanation for what the documents and ship tracking data show.

An EU country government source said Tri-Ocean is already under scrutiny by the United States for suspected violations of sanctions against Iran, giving no further details. The U.S. Treasury spokesman declined to comment on specific investigations.

There was no evidence that the Iraqi or Egyptian governments were involved in shipping Iraqi oil through Egypt’s port, as crude can change hands after first being exported.

Iraq has been criticized in the past by Western countries for allowing deliveries of supplies and weapons from Iran to Syria to pass through its airspace. Iraq’s oil ministry did not respond to multiple requests for comment. The Iraqi government controls exports of crude from the country and has tried to restrict traders from re-selling its oil.

A representative of the Arab Petroleum Pipeline Company, which is known as SUMED and owns and operates Egypt’s Mediterranean port of Sidi Kerir where the oil tankers loaded, had no comment. SUMED is half owned by the Egyptian state oil company EGPC and half by a group of four other Arab countries.

Tarek El-Molla, the chairman of EGPC, said that Egypt had banned state companies from dealing with Iranian oil and shipping firms, and that he was unaware of shipments to Syria.

El-Molla said a tanker flying the Iranian flag would not be able to berth at Sidi Kerir. The four NITC-operated tankers involved in the shipments have all been renamed within the past few years and were flying Tanzanian flags at the time they loaded in Egypt, a tactic Reuters has previously reported has been used by Iran to mitigate the impact of sanctions on its shipping since sanctions against Tehran were tightened in 2011.

Syria imported up to 17 million barrels of crude oil between February and October, of which roughly half came directly from Iran and half from Egypt’s Sidi Kerir port, according to the Middle Eastern shipping source. The cache of documents reveals that at least half of the oil from Egypt’s port was Iraqi crude.

Lebanese oil trading firm OPT arranged the shipments with Syria’s internationally blacklisted state-owned oil company, Sytrol, operator of the one functioning refinery still under Assad’s control. The documents show the firm invoicing Sytrol for almost $250 million for two deliveries of Iraqi crude it had arranged in March and May to Syria’s Banias refinery.

In a letter to Sytrol’s marketing manager dated April 4 of this year, OPT asked for a payment advance of around $50 million and detailed previous deals with the Syrian state oil company.

« Our company (OPT) has and continues to secure the state’s needs in oil and oil derivatives in the recent period and was able to secure this despite major difficulties and challenges, » said the letter from an OPT official, Abdelhamid Khamis Abdullah, whose name appears frequently in the correspondence. It was not possible to ascertain his exact role at the company.

The letter states OPT had already provided Sytrol with almost 5 million barrels of crude, diesel, and cooking fuel. The price for each barrel of Iraq’s Basra Light crude in the invoices is between $15 and $17 above the official Iraqi price at that time, equivalent to an extra $15 million for each tanker.

OPT denied being involved in selling oil to Syria.

« We dispute all what you mentioned in your below emails, » an OPT employee said in an email, without providing a name. The company offered no alternative explanation for the documents.

Egyptian oil firm Tri-Ocean Energy, which has brokered deals for OPT in the past, loaded at least one cargo of Iraqi crude onto an Iranian tanker that was delivered into Syria by OPT at the end of May, according to the documents, which say the oil was delivered to Syria on the Iranian tanker Clove on May 26.

Tri-Ocean’s senior trading director Ali Tolba denied in an email that his company supplied Syria with crude or had loaded Iraqi oil onto Iranian tankers. He and Tri-Ocean’s CEO, Mohammed el-Ansary, did not respond to a request from Reuters to review the documents seen by Reuters. Syria’s Sytrol did not respond.

Sytrol has used a blacklisted businessman close to Assad as intermediary to transfer money to OPT, according to the documents. In a letter from OPT to Sytrol on March 14 of this year, OPT requested payment through Ayman Jaber.

Jaber, who runs a company called Al Jazerra, is himself on U.S. and EU sanctions lists, which means firms or individuals doing business with him can themselves be added to the lists. When it listed Jaber a year ago, the U.S. Treasury accused him of coordinating state-sponsored pro-Assad militia groups known as Shabiha in the port of Latakia.

« Please could you pay the value of approximately $130 million plus 1.8 percent transfer fee into the account of Mr. Ayman Jaber, the head of Al Jazerra, at the central bank so he can transfer it into our accounts abroad, » OPT wrote. In another letter three weeks later, OPT confirmed receipt of around 375 million euros from Al Jazerra, transferred from the account of Ayman Jaber.

At least two other firms mentioned in the documents had names and logos similar to companies based in the EU, which would be directly subject to European sanctions forbidding them to deal with Sytrol or NITC. In both cases, European head offices denied any relationship with Syrian offices using their names.

Some of the documents confirming the arrival of the oil in Syria were stamped or signed by a shipping agency called Med Control Syria. Jhony Matnious, a manager at the company in Damascus, told Reuters by email that the crude imports were Iranian through a government agreement between Damascus and Tehran.

Med Control has a head office in Greece, which lists Syria as a branch office on its website with the same address, logo, phone number and email as in the documents. A manager there denied any relationship with the Syria office: « We had an agency agreement in Syria but it was never active and we never had any business in that country, » said Sam Papanikolas.

Documents showed some shipments were certified by a quality control firm called Inspectorate, owned by Paris-based firm Bureau Veritas. A Bureau Veritas spokeswoman in Paris said Inspectorate had previously employed a subcontractor in Syria but had stopped since October 2011, and any certificates this year would have been issued without the firm’s knowledge.

After leaving Iraq, the crude oil was delivered to Sidi Kerir on the 200 mile SUMED pipeline, which runs from the Red Sea to the port west of Alexandria, where it was loaded onto Iranian ships.

According to Reuters AIS Live ship tracking data, which monitors the location of oil tankers via satellite, the four ships each sailed north towards Syria. Each ship switched off its satellite signals just before the delivery date in Syria, then reappeared on satellite tracking shortly after. In some cases the satellite data also contains information about cargo weight, which confirms that the cargo was unloaded while the ships’ signals were shut off.

« Aiming to cut off a regime from oil supplies is very very difficult, » said Ayham Kamel, Middle East and North Africa analyst at Eurasia Group consultancy in London said. « Especially as the regime still has a few allies. »