Beauty amid the chaos: a snapshot of Syrian cities through Instagram

Photographers from Damascus to Aleppo are showing another side to their war-torn cities through Instagram. We speak to six Syrians about why some focus on destruction, and others on hope 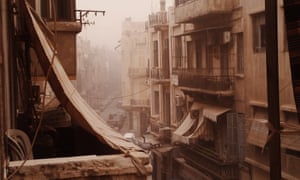 ‘For me, a picture is worth a thousand words.’ Photograph: Dunia ShabibCities is supported by

The reality of living in Syria’s protracted civil war depends on which city you are in.

In the capital, Damascus, which remains under government control, life has returned to some semblance of normality after six years of bloodshed, with reports suggesting that in parts of the city it’s hard to tell there is a war going on at all.

In Aleppo, where fighting still rings out in the suburbs, getting back to normal for many people means scraping by amid ruined buildings.

An estimated half a million people have died since war broke out in 2011, with 5 million people fleeing to neighbouring countries. But for those who remain, life must go on – and for some that means posting updates on social media.

In Syria, this isn’t always easy. The government sporadically cuts off access to the internet to disrupt the activities of their opponents. Nevertheless, there are Instagrammers who have remained committed to sharing snapshots from their lives – although this is easier in Damascus than in Aleppo.

We caught up with six photographers to find out how they are documenting life in their city, and why some choose to focus on war and others on hope.

“I post my cartoons that address the prominent issues preoccupying my fellow Syrians, from power blackouts to the lack of running water. I have amassed more than 30,000 followers, which has enabled me to find work as a painter. I like Instagram because it is less focused on politics. My favourite picture is this intricate sketch of Damascus on a small water cup.”

This scene is what I see every morning; I took this from my balcony. I like to watch how the birds rest on that wire tired from flying around. That morning like every other morning I took multiple shots of those birds, but this one where the background looked like a wave, made the shot so surreal.  They look as if they are being washed over by a wave onto the undefined shoreline. This is probably the closest one to my heart. #vscocam #moment #18th_bird_is_flying_away #birds #bluebirds #rightplacerightmoment #vscooftheday #picoftheday #birdman

“I was one of Syria’s early adopters of Instagram. I set up my account in 2012 and I still think it’s perfect for sharing pretty pictures. The photograph closest to my heart is a scene I see every morning from my balcony: birds sitting on an electrical wire taking a rest from flying around. For me, a picture is worth a thousand words.”

“Before I fled Aleppo I used Instagram to share the reality of war with the outside world, and I would often see my pictures spread quickly overseas. I think my most striking image is one from December [when the city was being bombarded by government airstrikes]. It shows the body of a woman who had died from chronic disease in a city running out of doctors. Her husband sat crying on the floor next to her.”

“I try to depict the other side of life in Syria’s cities. The roses, the nature and old narrow alleyways. I want people to see my account and realise that Syria is still beautiful despite the destruction and devastation. Instagram also helps to relieve the pressure of everyday life. My favourite picture is that of an old man entering his home in one of the old lanes in Tartus. It was Easter, you could hear hymns resonating from the nearby churches. It was magical.” 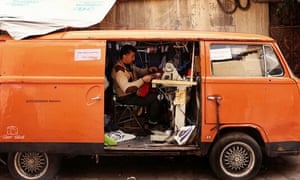 Reem Takr shared this image with us after she set her profile to private Photograph: Reem Takr

“Almost every morning I walk around my area in Damascus to take pictures of my surroundings. Instagram is central to my life and I use it to share a different narrative of the capital with my friends in and outside the country who only otherwise see images of war.

“I have recently made my account private for personal reasons, but I am happy to share my favourite picture with you: one of a Syrian tailor, who lost his workshop because of the war and started sewing clothes in an old car in the heart of the city. After I posted it, my followers asked for his address so they could support him with their custom, and the media rushed to cover his story.”

“The name of my account translates as ‘shot did not end’ and I use filters to edit photos to highlight the beauty in my city, which can never be damaged by the war. I am constantly inspired by my love for Damascus. The most striking image I have posted is that of a homeless child watching TV through a shop window.”