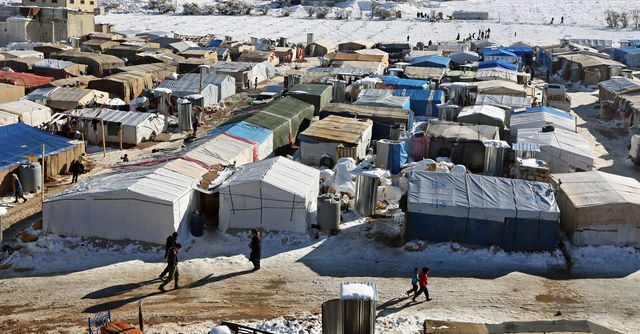 Local organizations have been working day and night over the past two months to prepare Syrians for the coming winter. Nearly a dozen people died across Syria last January due to a fatal combination of inadequate shelter and freezing weather. This year, they hope to be ready for anything

ALEPPO, Syria – As harsh winter weather descends on Syria, local aid organizations and councils are working around the clock to ensure Syria’s poor and displaced will survive the cold temperatures.With unaffordable fuel prices and mass power outages across the country, more than 80 local relief organizations, local councils and civil defense groups have been working under the banner, « Before the Disaster Strikes, » to prevent cold-weather fatalities the likes of which happened last year, according to Dr. Muawiya Harsouni, the campaign’s general manager.

« We are hoping to preemptively prepare for the risks of a harsh winter and hoping to avoid the unnecessary deaths, lack of food and blocked roads that we witnessed in previous years,” he said.

There are an estimated 6.5 million internally displaced people in Syria, according to the latest figures from the U.N. refugee agency. Many of these people have been displaced several times and lack any sort of proper housing to project themselves from the cold.

Winter in Syria can be harsh, especially in remote, hard-to-reach areas. Last year’s winter temperatures dropped to 8.6F (-13C) in some parts of the country. And when cold weather and inadequate shelters are coupled with electricity and fuel shortages, things only get worse.

« Syrians are facing their fifth winter in a state of conflict, » said Rummery. « Since the onset of hostilities, the average life expectancy has fallen by 20 years. Four out of five Syrians live in poverty and winter will be particularly harsh for them, as it will be for those who lack adequate shelter. »

Last year, unexpected heavy rains, snow and cold temperatures hit refugee camps across Syria and its neighboring countries, claiming the lives of 11 people in northern Syria, including a two-day-old infant and an elderly man in the city of Aleppo. Three other children died in the Halima refugee camp in Arsal, Lebanon, when tents collapsed due to heavy snow and rain.

Abdulrazzaq, a 39-year old from Aleppo, lives with his family of five in the Bab al-Salaam refugee camp, located along the Syrian-Turkish border. The camp, he said, is primitive at best. Electricity is almost non-existent, and water is only delivered sporadically. The only source of heat they have is from a barrel in which they burn pieces of plastic and old clothes to keep warm.

“I came here with my family when the bombing on Aleppo intensified in Ramadan [July/August] 2012. I could not afford to go anywhere else. Our suffering repeats itself every winter, » he said. « The tents are cheap and primitive. They soak in water when it rains, and they collapse when it snows. I burn whatever I can find in a barrel in order to keep us warm, but the smell is unbearable. They keep telling us that things will be better soon, but nothing has changed. »

Local organizations working to prevent the kind of cold-weather deaths that happened last year are well-aware of the dangers associated with winter.

“What happened in previous winters was deeply disturbing, » said Wael Halabi, a public relations officer with the Aleppo-based Abrar Association for Relief and Development, one of the partner organizations working with Before the Disaster Strikes. « We’ve taken many pre-emptive measures this year. »

« We launched our ‘Even a Dollar Can Help’ donation campaign two months ago, and have used the money to purchase diesel fuel, which we have distributed to poor families throughout Aleppo, » said Halabi. His organization hopes to provide 1,000 families with 100 liters of diesel each.

The situation in neighborhoods controlled by the opposition forces in the city of Aleppo isn’t much better than it is in the informal camps along the border. Since the armed conflict began, people in these areas have been living in deplorable conditions. Keeping warm during winter is a challenge because of the high cost of fuel and the lack of electricity, which lasts for less than four hours per day, if it comes at all.

Abu Salih, 64, lives with his wife in al-Jazmati, an opposition-controlled neighborhood in Aleppo. He said nearly everyone from the area has left because of the near-constant violence. During the day, he wanders empty streets in search of scraps to burn to keep his family warm.

« I’m an old man. I can’t work or afford diesel or wood to keep us warm, » he said. « I usually burn old furniture or old clothes.

« Winter here is very harsh. Last year, I received wood and a wood burner from an aid organization. But we haven’t received anything yet this winter. We hope that our voice will reach those in charge. »