Besieged in Eastern Aleppo but Happy to Be Here: Diary Entry – by Wissam Zarqa

Wissam lives with his wife in rebel-held eastern Aleppo, which has been under government siege since July. Violence is escalating in his neighborhood, but the teacher and activist wouldn’t want to be anywhere else.

ALEPPO – Day after day life is getting more difficult under the burden of siege and heavy shelling in eastern Aleppo. Food is getting more and more scarce. There are a few kinds of vegetables still available but cooking gas is not. An airstrike targeted and damaged the main water plant so now we have no supply of drinking water. There isn’t any electricity, either, so getting water from wells has become very costly. The fuel used to run bakeries and operate local electricity generators is running out and becoming more expensive. 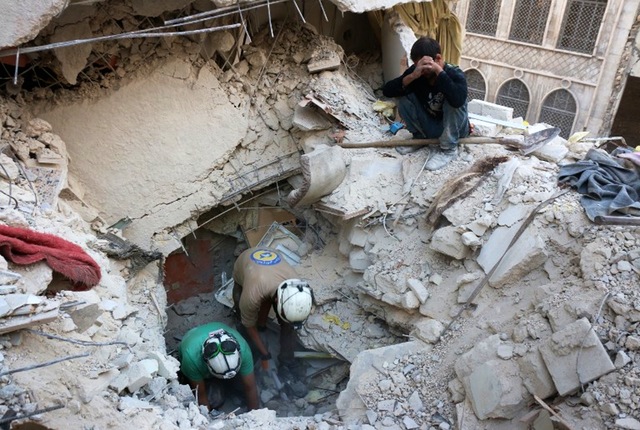 Syrian civil defense volunteers, known as the White Helmets, search for victims amid the rubble of destroyed buildings following a government forces airstrike on the rebel-held neighborhood of Bustan al-Basha in Aleppo on October 4, 2016.AFP/Thaer Mohammed

New weapons, some of which cause gaping holes in the ground, are now being used. Russian “bunker buster” bombs are threatening the safety of schools, which moved underground after many of them were hit in attacks. Russian and Syrian warplanes are systematically targeting hospitals, bakeries and other important infrastructure. Recently, the regime’s militias have been advancing on the ground and gaining new territory, making the siege even deadlier.

Eastern Aleppo has been under the threat of siege for two years. When the threat first loomed on the horizon, I was teaching at a university in Saudi Arabia and grew terrified that I might be locked out of Aleppo. I wanted to finish my third year teaching abroad and come back to Aleppo before it was really besieged with no way in or out.

Now I am in Aleppo, living under siege, with my pregnant wife. I met my beloved Aisha 10 months after I came back to Aleppo. When Aisha finished her studies in architecture, she went to Turkey to visit her sister but she then returned to her home in Aleppo to live with her mother. She met me three months later and we were married soon after. 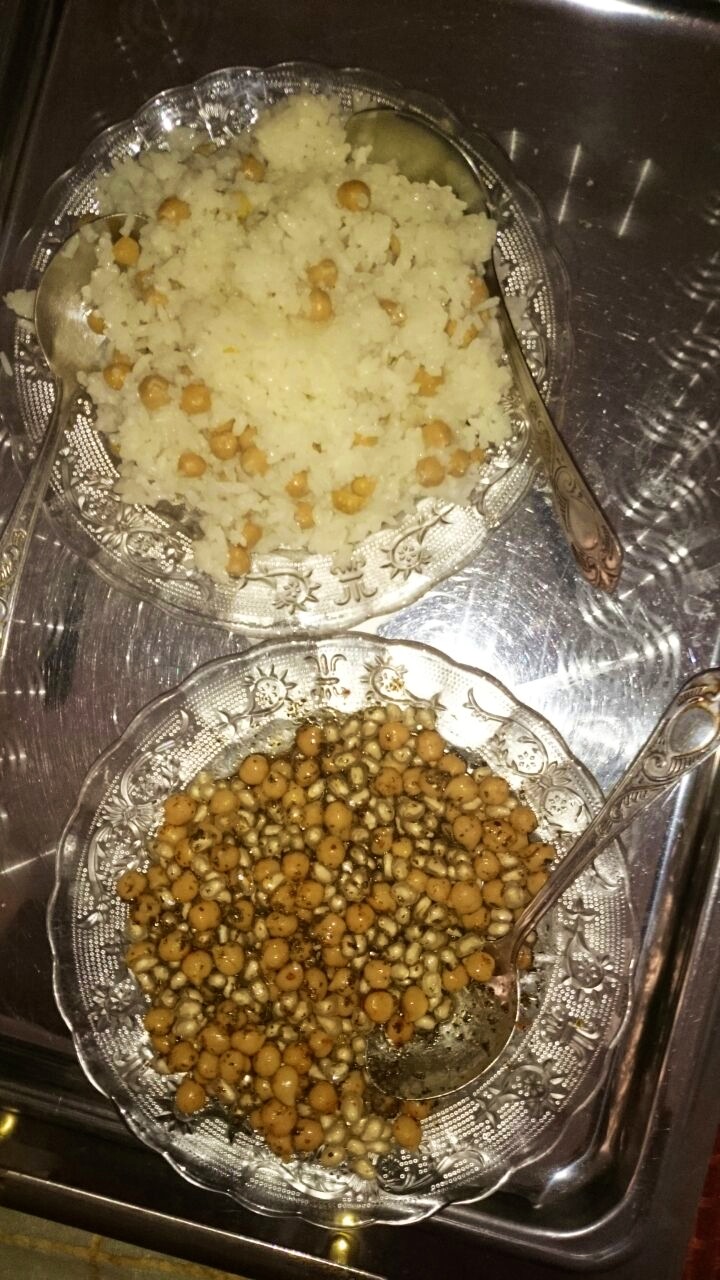 A meal shared by Wissam Zarqa and his wife during the siege of Aleppo. (Wissam Zarqa)

My parents, who now live in Turkey, always ask me to move there and settle down, as my brother and many of my friends have already done. Whenever they hear news of shelling in my neighborhood, my mother calls to check if we are safe. Aisha and I always send them photos of our meals, which, before the siege, used to include different kinds of cake and other sweet dishes. Now we just send them photos of spaghetti or rice with chickpeas.

At the beginning of the siege in July, the Syrian regime claimed that civilians could use humanitarian corridors to leave the rebel-held areas and many people were brought to these areas and filmed acting as if they were going back to the “lap of the homeland” (a term used to describe the regime-controlled areas). Some might be able to go to the regime areas if there are real corridors, especially government employees who must frequently travel to those areas to collect their pension. But most people here cannot leave and, like me, are not willing to. 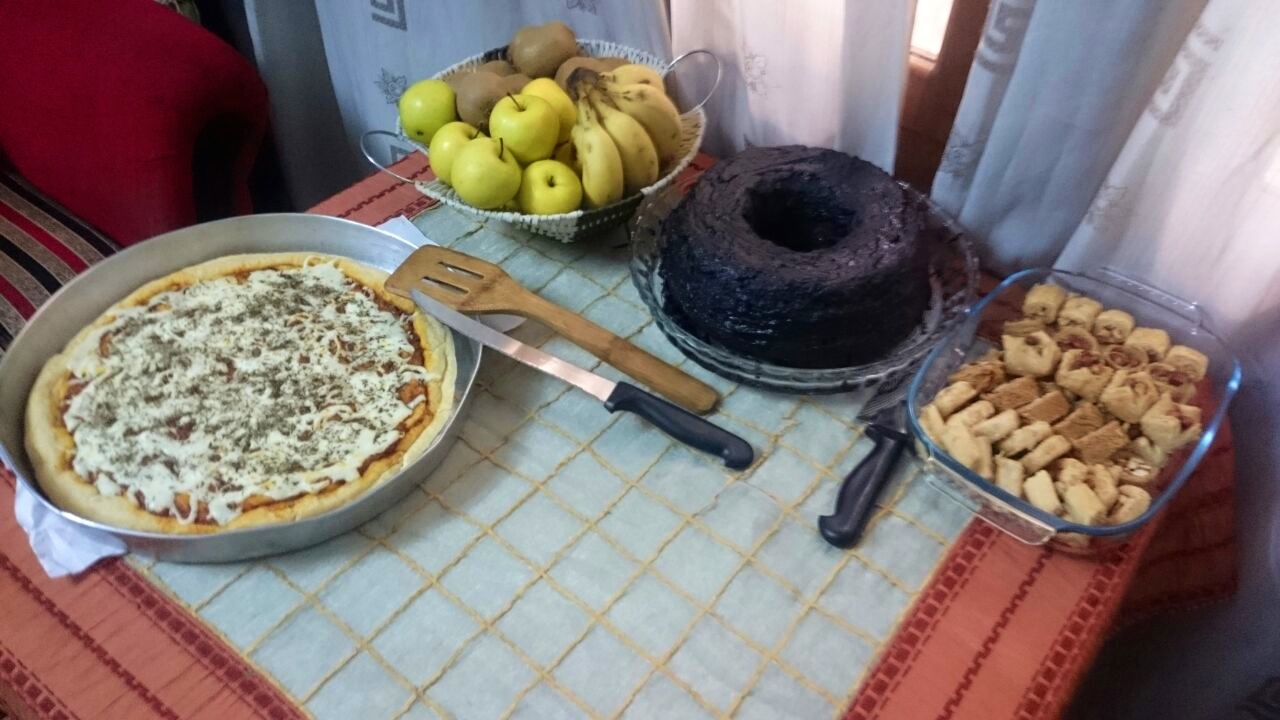 A meal shared by Wissam Zarqa and his wife before the siege began in eastern Aleppo. (Wissam Zarqa)

I frequently read reports claiming that most people in eastern Aleppo are the poorest of the poor and they are trapped here because they cannot afford the cost of transportation to flee to Turkey or Europe. I understand that journalists want to create an atmosphere of sympathy. However, it is not true. Skilled workers, teachers, engineers, lawyers, doctors, nurses and university students form a good percentage of the people who have chosen to stay in Aleppo.

I am happy I could come back to my city. Hopefully, I will be able to make a difference and encourage more students to return to school. Hopefully, I can help by teaching people how to communicate and give Aleppo a voice that will be heard in newspapers and on radio and TV channels. I might not be sure how useful I am here but I am sure how miserable I would be if I were not in Aleppo while it is besieged.