By abandoning Aleppo, the world has empowered jihadists – by Robin Yassin-Kassab

Aleppo is 7000 years old. Its name has mythical origins related to the prophet Abraham and his cow, its opulent history underwritten by its place on the Silk Road. Socially and architecturally unique, in its pre-war state Muslims and Christians, and Arabs, Armenians, Turkmen and Kurds, lived and traded in streets redolent sometimes of the Ottoman empire, sometimes of corners of Paris. Before the war Aleppo contained the world’s largest and most intact Arab-Islamic Old City. Now – with the covered souq, the Umayyad mosque, and many other markets, baths and khans destroyed – that honour passes to Morocco’s Fez.

The city’s working class-eastern districts have been liberated twice in the last five years. On the first occasion, July 2012, armed farmers swept in from the countryside to join urban revolutionaries against their Assadist tormentors and for a few weeks it felt the Assad regime would crumble in Syria’s largest city and economic powerhouse. But the battle soon succumbed to the war’s general logic: rebel ammunition ran out, the fighters squabbled and looted, foreign jihadists took advantage and a stalemate reigned.

These strangers pranced about on blast-traumatised horses, imposed their brutal versions of sharia law — including executing a fifteen-year-old coffee-seller for supposed blasphemy — and finally declared themselves a state.

In January 2014, prompted by popular anger, the entire armed rebellion declared war on Islamic State, driving it out of western Syria, Aleppo city included. This was the second liberation.

The fall of Aleppo certainly wouldn’t end the war, but it would probably mark the final defeat of the revolution. A few days ago it seemed this course of events was inevitable. Almost every relevant local, regional and global power was working to ensure it.

The fall of Aleppo certainly wouldn’t end the war, but it would probably mark the final defeat of the revolution

On July 17, following weeks of intense Russian bombing and ground attacks by Iranian-backed Shia militias from Lebanon, Iraq and Afghanistan, the regime captured the Castello Road. This meant Aleppo was fully beseiged.

IS, as usual, was attacking the rebels at the same time that Assad was.

So was the YPG, armed wing of the Kurdish Democratic Union Party (or PYD), which had helped prepare the siege by invading Arab-majority towns to the north. The PYD claimed it was fighting ‘jihadists’, but these areas were defended by Free Syrian Army factions and ruled by independent councils. American artist and journalist Molly Crabapple visited Azaz, a town hard-pressed by the PYD, after its second liberation. She described it thus: “They’d painted over the IS emblems in shocking pink, and then they’d painted the Quranic verse ‘There is no compulsion in religion’.”

Near Azaz the PYD advanced under Russian cover. In IS-held Manbij, it (as the dominant element in the ill-named Syrian Democratic Forces) advances under American planes. American bombing atrocities (such as the strikes on July 19 killing scores of civilians) are less frequent, less deliberate, but just as devastating as those perpetrated by Russia.

Russia is dropping banned cluster and incendiary bombs on a grand scale. Russian and Assadist planes have upped the war on hospitals, hitting six medical facilities in 24 hours (on July 23 and 24). The US administration has had nothing to say about this. Quite the contrary, President Obama has apparently approved a proposal to cooordinate American airstrikes with Russia, against Jabhat al-Nusra. And the Obama administration has consistently vetoed transfers of essential anti-aircraft weaponry to the rebels.

Aleppo has been all but abandoned by the world

Facing suffocation and defeat, with no-one coming to their aid, revolutionaries and fighters have now decided to unify their energies. For the last four days rebels have fought to lift the siege, attacking from multiple directions on a 20-km-long front. Demonstrators, meanwhile, are marching in support of the battle, and citizens are organising their own inpromptu No-Fly Zone, burning hundreds of tyres to cloud the skies and protect the advancing fighters. These include Free Army and Islamist battalions from across Aleppo and northern Syria.To the south of the city, the vanguard force is Jaish al-Fateh, comprising Ahrar al-Sham and the jihadists of Jabhat al-Nusra. Jaish al-Fateh is close to breaking the siege.

America watched or actively collaborated as Aleppo was driven into the abyss. Nusra, on the other hand, came to the people’s rescue. What message does this send?

For Syrians facing death and no good options, military realities must weigh heavier than social and political differences. In other words, in current conditions, they have no choice but to work with Nusra.

Now rebranded as ‘Fateh al-Sham’ and formally delinked from al-Qaida, Nusra is embedding itself by military prowess. Its role is being immeasurably strengthened by Russian and American policies.

Robin Yassin-Kassab is co-author, with Leila al-Shami, of Burning Country: Syrians in Revolution and War, and author of The Road From Damascus, a novel. Books he has contributed to include Syria Speaks, Shifting Sands, and Beta-Life: Stories from an A-Life Future. His book reviews and commentary have appeared in the Guardian, the National, Foreign Policy, the Daily Beast and others, and he often comments on Syria on TV and radio.He blogs at qunfuz.com and pulsemedia.org

Opinions expressed in this article remain those of the author and do not necessarily represent those of The New Arab, its editorial board or staff.

Comment: Robin Yassin-Kassab argues that besieged Syrians in Aleppo, thanks to the world’s betrayal, now have no choice but to work with jihadists like the Nusra Front has empowered jihadists 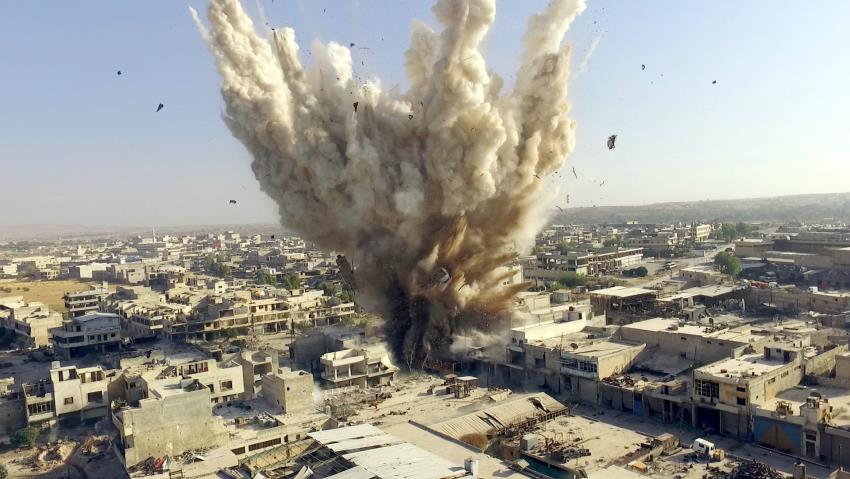