The rebel attack earlier this month on the Syrian village of Maaloula heightened worries that the conflict there is becoming increasingly sectarian, with some members of the historic Christian community there fleeing and saying churches had been desecrated. However, some of the residents the BBC has spoken to have challenged this narrative.

The violence in the village earlier this month centred around a pro-government checkpoint set up at the southern entrance of the village by the military, with some members from the National Defence Force, a newly-formed militia of community members, mainly Alawites and Christians.

Rebel fighters say they had had control over the northern side of Maaloula, on top of the Qalamoun mountain, for the last eight months.

There had been some rounds of fighting around the village in the last few months, but the world’s attention was only drawn to Maaloula on 5 September, when a fighter affiliated to the jihadist al-Nusra Front drove up to the check point and blew himself up, killing several soldiers and pro-government militiamen.

A number of armed men then entered the St Takla monastery in the north of the village and asked the nuns there whether there were any government soldiers hiding there. 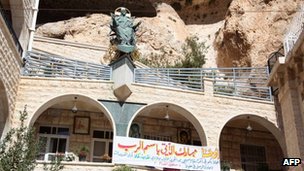 « There were around 20 of them. They looked like Islamists, but they did us no harm, » one of the nuns told the BBC a few days after the incident.

« They told us they were after Bashar al-Assad and his army, not Christians, » the nun explained.

Then the armed men returned to the monastery, which is home to nine nuns and 35 others, children and elderly people cared for by the nuns. They all stayed in Maaloula, even during the intense fighting.

On their second visit, the nun explains, the men asked the nuns to make a video statement to the effect that they hadn’t been harmed or attacked by the rebels, which was then posted on YouTube.

The rebels then left their arms outside the monastery and climbed up to film the village from above in an attempt to prove that they left without causing damage or attacking the churches, according to the nun the BBC spoke to. 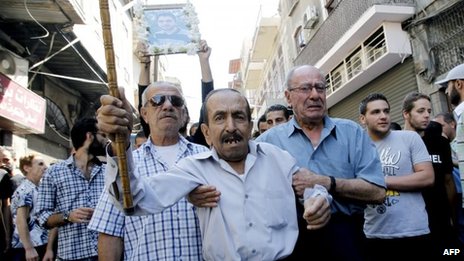 The attack resulted in the death of three residents of the village and most of Maaloula’s residents have now fled the violence to Damascus.

Later on, there were increasing exchanges of fire between the two sides.

Residents of Maaloula called on the army to come and protect them but as one resident said: « The army betrayed us and sold us to the media. »

The army arrived in Maaloula on Saturday 7 September and only stayed for a few hours, pulling out and allowing the rebels to enter again, the resident – who wished to remain unnamed – told the BBC.

Questions have been raised of the timing of the attack as it happened only two days before a prayer for peace was due to take place in Maaloula in response to a call by Pope Francis for a day of fasting and prayer worldwide in aid of peace in Syria.

It also coincided with what looked like the run-up to an imminent US strike against Syria.

Amer al-Qalamouni, the spokesman for Ahrar al-Sham and Qalamoun Liberation front, a group of non-Islamist fighters affiliated with the Free Syrian Army, says the timing of the attack only benefited the regime’s narrative.

« The situation was going on for months, but suddenly the al-Nusra Front decided to attack the checkpoint, » Mr Qalamouni told the BBC.

« Members of Ahrar al-Sham and Qalamoun Liberation Front then participated in the clashes. The aim was never an attack against Christians but to deal with the checkpoint itself, » he goes on.

Mr Qalamouni said that he thought the Islamists of the al-Nusra Front had used the opportunity send a message to the West that they had no need of Western intervention.

The fighting in Maaloula is the first such attack on a notable Christian community since the start of the uprising.

Residents of many Christian villages around Homs and Hama have been fleeing the violence along with members of other communities, but had not up until now been attacked themselves.

Like many villages and cities across Syria, Maaloula has been home to different religious communities who have lived in coexistence for decades.

Famously, it is one of three villages in Syria where Aramaic, the language of Jesus Christ, is still spoken.

St Takla’s monastery has always been a home for orphans from both Christian and Muslim communities. 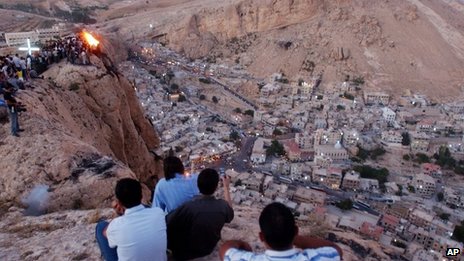 Every September, Syrians of all religions have participated in the Day of the Cross festival in Maaloula. Muslims would attend prayers in the church and women with headscarves would light candles there.

After the long day of celebration and a parade through the village, the evening’s festivities would begin with a climb up the mountain.

Later fires would be lit and songs sung to guitar music until sunrise.

But today Maaloula has been subjected to the flame of war that has burnt so many parts of Syria.

The nun that the BBC reached in St Takla’s monastery said she believed Syria’s Christians were not the target of the violence but that they were becoming caught in the crossfire.

She says she had urged the rebels who came to the monastery to negotiate with the regime.

« I told them: ‘If you go on to every village and there are battles and lives lost, then you are not going to get rid of Bashar al-Assad. You need to sit and talk to find a solution.' »