Collecting Evidence of War Crimes in Syria – by Kim Bode

Law professor David Crane, who has a record of taking on the prosecution of war criminals, is keeping a detailed record of the events in Syria for future prosecution. His Syrian Accountability Project’s latest report takes a close look at Aleppo.

The Syrian Accountability Project (SAP) at Syracuse University doesn’t know about weekends. “It’s a seven-day-a-week operation,” says project leader and law professor David Crane. The SAP team updates its extensive database constantly and provides quarterly reports to its clients, “which are the United Nations, the [U.S.] Office of the Legal Advisor, the Chief Prosecutor of the International Criminal Court, the High Commissioner for Human Rights, as well as various countries,” he says.

Since 2011 the SAP has been documenting war crimes and crimes against humanity in Syria. “It’s a neutral effort. We’re not looking at one side or the other, we’re building a trial package against anyone who commits war crimes and crimes against humanity,” says Crane. The trial package is for domestic or international prosecutors in the future who decide to bring a case to court.

Crane is confident that it will happen, it might just take a little longer. He’s got experience.

As founding Chief Prosecutor of the Special Court for Sierra Leone, Crane helped to send Charles Taylor to prison. He created SAP as an organization using “the tried and proven techniques of what we did in West Africa and apply them to the Syrian civil war.”

Syria Deeply spoke with Crane about SAP’s latest research on Aleppo, its techniques and quality control and his viewpoint on the chances of prosecuting war crimes in the context of the Syrian crisis

Syria Deeply: In your latest report “Covered in Dust, Veiled by Shadow: The Siege and Destruction of Aleppo” you provide a historical narrative of the city, going as far back as the 3rd millennium B.C. to when it was known as Ha-lam. Why did you decide to look back so far?

David M. Crane: Like all white papers these are information assets for people who know nothing about Aleppo to people who are deeply involved and everything in between. The purpose is to inform, for example, a policymaker, a diplomat or someone who is in the international criminal business and to allow someone who is not informed at all to read through the white paper and have a basic overview – a four corners overview – of what took place in Aleppo over the past six, seven months. We wanted to also give the important historical context of Aleppo and the tragedy of the destruction of this ancient city.

Syria Deeply: What methodology and tools did you and your team use?

Crane: We work with researchers, investigators and criminal information analysts. We used the same techniques, the same analysis and data collection that we had been using for well over six years, and that is through various sources. We have an incredible amount of data at our fingertips.

We have what we call open source material, which is data that is currently available on the web, social media and what have you. We also have what we call walk-in information; in other words, we received on a regular basis individuals who report to us incidents and situations they want to bring to our attention. Then we have our clandestine methodologies; we’ve been developing an information network within Syria that is reporting to us through clandestine means.

Syria Deeply: How do you verify the accuracy of all this information?

Crane: Any incident that is asserted, any incident that is known, any incident that there is an allegation we have to verify at least once, if not two times, before we actually consider it an incident. We look at other sources and other ways. Either through open source, other walk-ins or we go back to other assets. Our assets don’t know each other so that they’re not doubling and repeating the same thing. We go out and verify if something has taken place.

Syria Deeply: What are the key findings in this Aleppo report?

Crane: It is a continuation of a horror story that started back in March of 2011. All sides have dropped any kind of decorum as far as treating civilians respectfully under the international humanitarian law principles, which they are violating, which makes them war crimes or crimes against humanity.

We saw, again, unlawful use of weapon systems. We saw weapon systems that were calculated to cause unnecessary suffering. We saw indiscriminate attacks on civilians. We saw the attacks on protected places, as we say in international humanitarian law, such as hospitals, churches, mosques. What we wanted to do with this white paper is underscore the microcosm of the horror that is Syria in and of itself.

Syria Deeply: What kind of consequences do you hope publication of the report will have?

Crane: The Syrian Accountability Project and an ancillary I Am Syriaprogram aim to keep the Syrian narrative in discussion. Syria has slowly but surely taken a back seat to ISIS and is slowly but surely slipping into the middle of the paper, or is not in the paper at all anymore. Like Syria Deeply, we wanted to make sure that the public just doesn’t walk away in this terrible 24-, actually, 5-minute news cycle that we find ourselves in.

The white paper is publicly available through the internet. Obviously, key people have had it and responded very positively towards it. It also goes out to high-school students around the world. We have over 12,000 teachers that use our lesson plans for Syria through the I Am Syria campaign on a weekly basis.

We need to show the people of the world that we have an industrialized killing machine going on not quite seen since Saddam Hussein. Also, the industrialized way they’re doing it, slowly but surely with a great deal of organization, we haven’t seen that since Nazi Germany.

Syria Deeply: As founding Chief Prosecutor of the Special Court for Sierra Leone, how do you see chances of prosecuting war crimes in the context of the Syrian crisis?

Crane: Right now, there is no chance. The geopolitical situation does not have the capability of doing anything. I don’t see anything happening for the next five or 10 years. However, that shouldn’t dissuade us as far as continuing our work.

President Assad and his henchmen know who we are, they hear our footsteps and someday there’ll be a knock at the door. There is no statute of limitations for international crimes. So whether Assad is prosecuted next week or 20 years from now, he will be prosecuted. That’s why it’s so critical to have a very professionally put together set of evidentiary documents that they can take to court because this may not happen for some time.

I took down Charles Taylor and indicted him, and he was found guilty for aiding and abetting war crimes and crimes against humanity and the destruction of over 1.2 million human beings. He never thought that he would be held accountable for that, and he now sits in a prison, for the rest of his life.

Time is not the essence. We have to have the patience or perseverance and a desire to keep moving forward. But he knows we’ve got him, it’s just a matter of time. When there is a geopolitical opportunity, I wish he and all the others who bear the greatest responsibility for all the tragedy will be held accountable.

This interview has been edited for length and clarity. 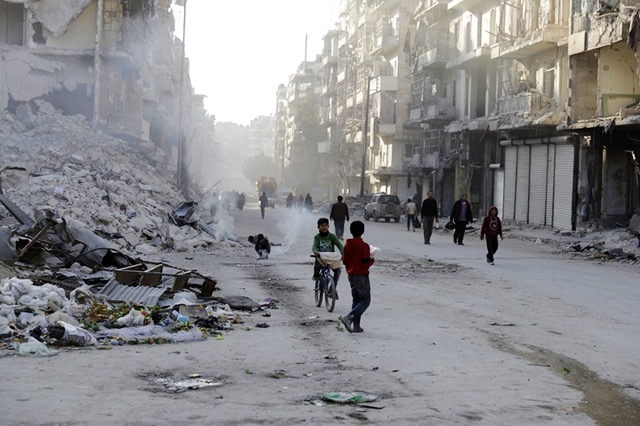 People walk past heavily damaged buildings on March 9, 2017, in the formerly rebel-held al-Shaar neighbourhood of Aleppo, which was recaptured by government forces in December 2016. AFP/JOSEPH EID