After more than five years of war, many areas of Syria have been reduced to rubble. Despite the ongoing conflict, Hisham Dirani, director of Binaa, an engineering and management NGO, discusses how the organization is spearheading rebuilding projects inside the country.

AMID THE WAR and the savage bombardment raging today in Syria, Binaa is working on development and construction. Some might say that building and developing in the shadow of destructive bombardment in Syria is illogical. However, Binaa director Hisham Dirani responded to some questions to explain the significance of this work in the current context.

Question: What is Binaa and what does it do?

Binaa is a nonprofit humanitarian organization founded September 2013 in Turkey to advance humanitarian services inside Syria by way of its engineering and project management expertise. After its establishment, Binaa began its first year through the support of Syrian private businessmen who worked in the engineering sector; they believed in the importance of applying their skillsets in this field on the ground in Syria regardless of whether the situation was stable or not.

Question: How was Binaa launched in Syria?

Binaa did not begin by designing, implementing, and attracting support for projects directly but instead by studying the problems that were afflicting Syrians in regions outside of regime control, most of which are due to the absence of authorities and institutions concerned with managing Syrian civilian affairs. Problems afflicting these residents went undiagnosed. Binaa began by putting these issues in a clearly defined framework to put before the international community so that it could work to solve them. Binaa sought to define the most important of these problems which it would be able to work on solving; it also aims to convince the international community of the necessity of working to solve them now and not later. Essentially, we started, we worked hard, our work continued, and we are still going.

Question: What was the first project launched by Binaa?

I won’t begin by speaking about a first project, but rather by speaking about the first problem we worked to solve, which were migrations to the Syrian countryside caused by bombardments and battles. This led to an obvious rise in the number of residents in rural areas, most of which did not possess the infrastructure necessary to receive this large number of migrants. The assistance that aid organizations deliver to these displaced peoples often takes the form of tents, which do not provide the displaced with comfort and privacy. At times, it seemed as if some of them were given priority over the local residents. Displaced people spent huge amounts of money to rent homes; and some began using schools and public buildings as if they were residents and, as a result of this, the newly-settled migrants and local residents began to bicker with one another because the towns and villages could not accommodate this influx of new residents.

After more than eight months of study, Binaa created a new construction model inside Syria: modular composite construction, or prefabricated buildings, which solved the infrastructure and resource problems by providing privacy and security. This model does not require foundations, heavy machinery, or a high level of skill to build. These structures are resistant to earthquakes and, additionally, the process is swift, and the structures can be moved in the event of an emergency. Using this technique, it is possible to erect a 400-square-meter (4,305-square-foot) building in a period less than seven days.

Actually, Binaa began to implement this project by building three schools in the countryside north and south of Aleppo with private support. This project convinced the international community that these models were viable and opened them to the possibility of identifying creative solutions under emergency conditions and the need to apply these solutions in Syria today. Binaa continues to supervise the operation of these schools until this day.

Question: What are the takeaways Binaa obtained from this project?

The way this project was executed – by paying particular respect to quality and supervision of the work throughout the building process – made it possible for Binaa to become interconnected with the people and reach an understanding about the problems afflicting them, which gave Binaa a big advantage. Through this project, Binaa gained a lot of credibility among the residents of the regions where we work, which I consider an important gain for the organization. We also learned, through this project and the effectiveness of this type of construction, how to implement this solution and other solutions to provide water to Syrians at this critical time. The construction project also delivered to the residents of the targeted regions education for 2,100 students and 45 job opportunities for school personnel.

Question: Do you have other projects related to construction? What is the nature of these projects, if any?

Binaa has not stopped since the launch of its first building project. We completed a mud village which benefitted 90 families who had been living in schools. They were moved to the new homes and the schools returned to work again. Today, we are building four mud villages comprised of 2,000 housing units with financing from the Qatari Red Crescent in addition to working with a number of partners to rehabilitate homes in a number of Syrian cities and towns which were damaged by bombardments and the ongoing war. This project is supported by USAID. Thanks to Binaa personnel’s creative engineering, we worked on building two fortified underground field hospitals where air strikes are incapable of reaching so that Syrian citizens can receive treatment in complete security. We are also working on developing a number of infrastructure projects in water, electricity, and solar power in many areas and supervising their operation. Binaa’s projects still contribute to providing a dignified and visibly stable life for Syrian citizens.

Question: What are the difficulties and obstacles which Binaa’s team faces inside Syria?

Amongst the biggest obstacles and difficulties that Binaa’s Syria team faces are savage bombardments, and by ‘savage’ I mean the targeting of any facilities that are helping to improve Syrians’ quality of life. The evidence for this is the targeting of medical clinics and field hospitals, civil defense centers, kitchens, schools, water purification centers, and power generation stations. Naturally, these strikes are carried out by aircraft and we, as a humanitarian organization, do not work to identify the types of aircrafts that are conducting these strikes.

However, we as individuals all know that the planes patrolling the skies of Syria are Syrian or Russian or, perhaps, aircrafts of the US-led coalition. We sent several messages – by way of the Syrian Non-Government Organization Alliance (SNA), which includes 20 Syrian organizations and is a part of a confederation that includes more than 150 humanitarian organizations – to the international community. These messages carried information on issues afflicting the Syrians, the most important of which was the bombardment that directly targets infrastructure, sources of livelihood, and humanitarian services.

Question: Are you at all present in besieged areas?

Binaa works not only in Idlib, Aleppo, and Hama but is also present in many other cities, including besieged cities in the Damascus countryside and the suburbs of eastern Ghouta. Binaa executed a number of projects here, such as quality-of-life projects which preserve the natural resources of besieged areas, raise the quality of use and simultaneously provide a source of livelihood for besieged citizens. We call these projects – which specialize in livestock and agricultural production – our food security projects. These projects target women specifically, as they are the most vulnerable group in these areas. Binaa’s mission is to reach all citizens, regardless of their affiliation and denomination, and help them. We do not yet possess the ability to enter every besieged and non-besieged area because access is not determined by Binaa but instead by the various armed elements on the ground.

For example, among the areas under siege by the Syrian regime, we are present in eastern Ghouta. A Binaa team had been present in this area prior to the siege. The nature of the area helps the team conduct its work, specifically the agricultural land and livestock. The environment of Ghouta is different than in Madaya, which the Syrian regime is also besieging (but where Binaa was not already present before the siege). As for those areas under siege by the opposition, for example Kufriya and Fuah, it is very difficult to enter. Despite previous attempts to negotiate with opposition groups controlling these areas to conduct aid delivery, the responses are always the same: “There are only 25,000 people present in these areas, whereas the areas under siege by the regime have up to 1.2 million.” In addition to this, there is the threat that any operation to secretly help besieged loyalists is an operation to help the Syrian regime that, according to some reports, is besieging more than 1 million Syrian civilians.

Projects to support natural resources and secure necessities for the civilian population in some of these areas include: a goat and cattle husbandry project, an apricot jam manufacturing project, a wheat farming project, and a potato farming project; these were all in besieged areas.

Question: Has Binaa identified partners for its projects?

From the end of 2014 until now, Binaa has built a very good partnership with a group of international organizations and United Nations agencies like UNICEF, the Food and Agriculture Organization of the UN (FAO), the UN Global Compact (GC), the International Organization for Migration (IOM), Rotary International (RI), Save the Children International (SCI), and the Qatari Red Crescent Society (QRCS). With their assistance, we have executed a number of projects, and also received direct support from the United Nations through the Office for the Coordination of Humanitarian Affairs’ Syria Emergency Response Fund. In 2015, Binaa received close to $4.5 million in direct funding, in addition to $2.5 million in indirect funding. As a result of this support, Binaa executed close to 25 projects in Idlib, Hama, and Aleppo provinces and Damascus countryside. Currently, we have begun trying to work in Dera’a and are evaluating the possibility of working in regions controlled by Kurdish forces.

Question: What does the future look like for Binaa in Syria?

Binaa’s future is in serving Syrians within Syria within our area of specialization: providing engineering and supervisory services and continuing with our traditions of high-quality performance, especially in the area of infrastructure for potable water, sanitation and support for the agricultural and medical, systems. We will work to support any project which contributes to providing stability, the continuity of the Syrian way of life, and providing decent livelihoods for the Syrian people. 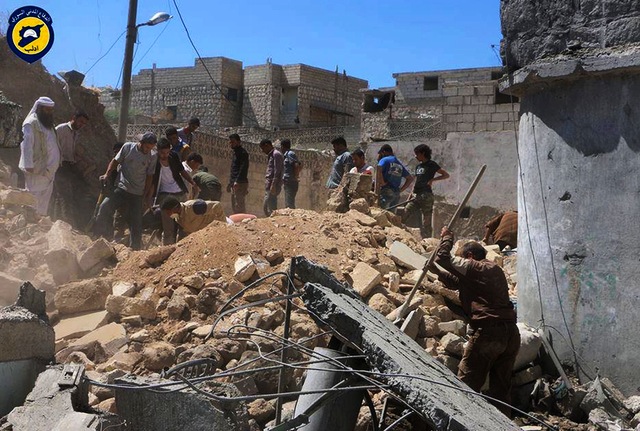 This article was originally published by the Atlantic Council

Juma Alabdon is a civil activist from Deir Ezzor. He worked as a paramedic on the fronts, in the media with Alwan Team, with the human rights organization SAMA, and has written for Good Morning Syria.