Conversations: One Doctor’s Struggle for Justice – by Donna McKay

The only way to reinstate peace and stability in Syria is to document ongoing crimes in the hopes that those responsible will some day be brought to justice, according to a doctor working with Physicians for Human Rights along the Turkish border.

Throughout the past five years of conflict in Syria, the global nonprofit Physicians for Human Rights (PHR) has documented countless targeted and indiscriminate strikes on hospitals and doctors across the country.

According to PHR, at least 738 medical personnel have been killed since 2011, and hospitals and medical facilities have been attacked 365 times, mostly by Syrian government forces. PHR works with a network of physicians who, despite the continuous attacks on medical personnel, continue to risk their lives to treat those in need and document evidence of torture and sexual violence for future war-crimes prosecutions. 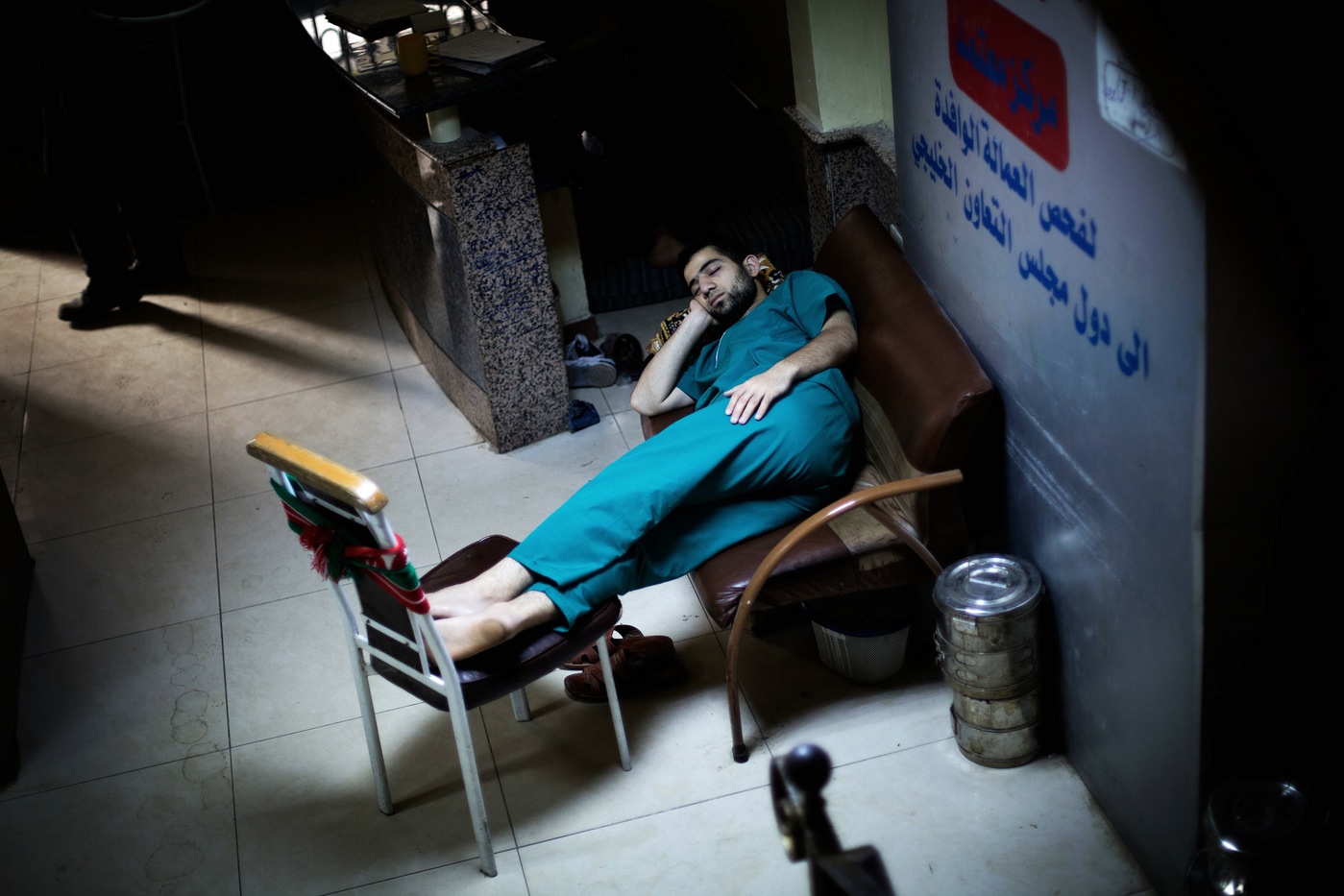 A Syrian doctor sleeps in the waiting room of Dar al-Shifa hospital in Aleppo on Oct. 21, 2012. AP/ Manu Brabo

One of those physicians, whom we’ll call Dr. Lena, has been working with PHR since 2013. Before fleeing Syria in 2011, her husband, also a physician, was detained and tortured by government forces. Two of her close family members were arrested and are still unaccounted for. Undeterred, Dr. Lena continues to work in Turkey, providing care for some of the country’s 3 million Syrian refugees. Last month, she traveled to the United States to advocate on behalf of her colleagues – and to receive the 2016 Physicians for Human Rights Award in New York.

She sat down with PHR’s executive director Donna McKay for a conversation about her work, her motivations, her personal safety and her dreams for the future of Syria. What follows is an edited and condensed version of that conversation.

McKay: Dr. Lena, help me understand a little bit about what makes Syria such a dangerous place to practice medicine?

Dr. Lena: I think it’s related to the risk of being arrested. For a physician who works anyplace in Syria, whether it’s in areas held by the regime or the opposition, there is a risk. And for me, I cannot be there anymore, because there is a risk even to see my family.

McKay: But why specifically are physicians and medical workers targeted?

Dr. Lena: Because in the eyes of the regime, they are assisting the opposition. They are helping injured people who are against the regime. At the beginning of the revolution in 2011, government forces just arrested the doctors. There was no ISIS at that time, no armed groups, no fighting, nothing else – just they arrested the physicians who were treating those who were wounded or injured during anti-government demonstrations.

They also arrested people like my husband just because he and his colleagues tried to organize a network of field clinics with some medical equipment [to treat injured protesters]. That enough is a reason for the regime to arrest you. When I was notified of my husband’s arrest, the arrest report just said that he was helping the injured. That was written as the reason for his arrest.

In the last two years or so, the regime has been targeting medical facilities for airstrikes, and you can’t say it’s a mistake. One time, two times, you can understand – that would make sense for you if it’s a mistake. But some facilities like Bab al-Hawa Hospital have been struck six times. A doctor’s car was targeted, an MSF hospital was targeted. They know. It’s not a mistake.

McKay: What got you interested in working to document human rights abuses in Syria?

Dr. Lena: Before I trained with PHR [in documenting human rights abuses], I met a lot of survivors, and I was treating them as a physician. I didn’t approach what happened to them in a systematic way – to evaluate them, to have some evidence, and to make sure that I can document evidence of what they’ve experienced.

But later on, after the PHR training, I found that it’s very important to document the cases as early as possible to keep evidence so that a strong file can be brought to court. You hear stories of detainees, a lot of stories about violations of human rights, but if you don’t have evidence you cannot do anything to prosecute the criminals.

At this moment, we don’t have a mechanism for accountability or to prosecute the criminals, but at least maybe in the future in Syria we can work to make reparations for those victims and help them lead normal lives or reinvolve them in society.

The standard I want is that criminals should be prosecuted to keep Syria connected, because there can be no peace without justice. So it’s very important for the future of Syria. It may take 20 years or more, but at least in Syria we can offer some kind of justice for the people who are suffering.

McKay: Do you worry that the work you’re doing puts you at greater risk?

Dr. Lena: Yes, I am worried. I try to do my best to protect myself and my family, but it’s a risky job. I’m personally committed to this documentation work because two of my own family members are still missing inside Syria.

McKay: Wars end, and this war will end. What do you dream about when this war is over? What are you hopeful for?

Dr. Lena: I hope I can go back to Syria as soon as possible. I’d have to have guarantees that I wouldn’t be detained and that airstrikes would end, mainly for my children, because I would feel guilty if any of my family members were hurt. I will go back soon to Syria, and I hope that I will participate in rebuilding Syria and helping my people.

Donna McKay is the Executive Director of Physicians for Human Rights.