Despite Impressions, Syrian Violence Still Raging in Some Areas: ICRC – by Hashem Osseiran

Syria Deeply spoke with Pawel Krzysiek of the International Committee of the Red Cross about the recent escalation in violence in the country – the worst since the battle for Aleppo in 2016.

BEIRUT – Despite impressions in some quarters that the Syrian conflict is winding down, fighting has recently increased in several areas, forcing thousands of people to flee their homes, an official with the International Committee of the Red Cross (ICRC) in Damascus told Syria Deeply.

“What we have seen, especially in the past couple of weeks, is that the situation is very much contrary to [winding down],” said Pawel Krzysiek, the ICRC’s communication coordinator in the Syrian capital.

The latest escalation in fighting marks the “worst levels of violence since the battle for Aleppo in 2016,” the ICRC said in a news release published last week. As many as 10 medical structures were targeted in a 10-day period between September 26 and October 5, and around 21,800 people who fled fighting in and around Deir Ezzor have poured into a camp for the internally displaced in Hassakeh over the past three weeks.

Syria Deeply spoke to Krzysiek about how ICRC tracked the escalation in violence.

Syria Deeply: The ICRC news brief says Syria is currently seeing the highest levels of violence since the battle for Aleppo in 2016. How was this determined?

Pawel Krzysiek: This is not determined through a spike in casualty rates because, unfortunately in Syria, access is very limited and we do not have access to accurate data. We focus instead on identifying basic trends: We look into the humanitarian consequences of the ongoing fighting. We talk to the people on the ground, in the places very heavily affected by hostilities, for instance in the camps around Raqqa and Deir Ezzor. We also reach out to our sources on the ground and we scan the media. Through this approach, we have been able to collect sufficient information on certain incidents, including rates of displacement and attacks against medical facilities and other essential infrastructure in Syria, that illustrate this intensification of violence.

Syria Deeply: Can you provide some examples that illustrate the recent spike in violence?

Krzysiek: Two weeks ago, our teams visited the al-Arishah camp in Syria’s Hasakah Governorate. It is a camp for internally displaced people (IDPs) and most of its inhabitants have fled fighting in the outskirts of Deir Ezzor. The camp’s population at the time of the visit was 4,200 people. Two weeks later, this number increased to 17,000, and today it amounts to over 26,000 people and this number is growing. This means that at least 21,800 people fled to only this camp in three weeks. If you look at the Ayn Issa camp near Raqqa, the initial population when our teams visited two weeks ago was 11,000. Two weeks later it was 18,000. Again, a very sharp increase.

This increase in the number of IDPs can be taken as an indicator of rising levels of violence. In the case of the al-Arishah camp and the Ayn Issa camp, the rising number of displaced people is largely due to an intensification of violence in the provinces of Raqqa and Deir Ezzor.

Syria Deeply: Beyond displacement, what other indicators were used to assess this spike in violence?

Krzysiek: We also assessed the damage done to essential civilian infrastructure such as water plants, electricity plants, medical structures and so on. In the past weeks, it’s become very clear that there is a remarkable increase in the number of civilian infrastructure damaged by increased attacks. If you look into the current trend, we are talking about at least 10 medical structures hit over 10 days. This is something that we have not seen since the 2016 battle for eastern Aleppo in terms of scale.

Syria Deeply: How does it compare to the level of violence seen in Aleppo in 2016?

Krzysiek: When we compare the battle for Aleppo with the current spike in violence, we are only talking about similarity in terms of the humanitarian consequences. Everything else is absolutely different.

Take the example of displacement. In the very early days of the battle for Aleppo, we have seen over 15,000 people fleeing in a period of three days. Today, if you look at the Arishah camp we are talking about 10,000 people reportedly pouring into the camp in two days (October 7-8). Of course the ratio is slightly different, but the massive displacement that is a consequence of the intensification of fighting is very similar.

Syria Deeply: Looking at these indicators, it seems that the ICRC documented an intensification of violence in a number of areas across Syria, rather than being concentrated in one place as was the case with Aleppo. Where do we see the most intense fighting?

Krzysiek: Of course we have the battle against the so-called Islamic State group that takes up a lot of the media space. So we have very intense fighting in and around Raqqa. And here we really want to flag the danger this violence poses to the fate of the some 8,000 people who are believed to still be in Raqqa. We of course have also seen escalating violence in Deir Ezzor, both in the provincial capital and its outskirts and on both the eastern and western banks of the Euphrates River.

You also have rising levels of violence in areas designated as so-called de-escalation zones such as the Eastern Ghouta suburbs of Damascus, which was relatively calm for a period of time before the recent spike in violence. You also have intensified fighting in northern Homs and in rural Hama. You also have increased fighting in Idlib province. These are the main flashpoints. If you locate them on the map, you will find that we are talking about very widespread violence. The fighting has definitely spread all over Syria right now.

Syria Deeply: Do you expect that this spike in violence will continue in the coming months?

Krzysiek: Well, that’s a tricky and difficult question because the ICRC is not really in a position to evaluate the intentions of those fighting. What we see is that there is clearly a lack of precaution in the way the hostilities are being carried out. The attack on the Sham Hospital [in northern Hama on September 26], that deprived over half million people of its medical services, is an example of this.

I do not know if this trend will continue and I hope it will not for the sake of civilians. If the casualty rates, the scale of the suffering, and the extent of damage done to infrastructure is already so high right now, I would be concerned about what it can become if this fighting continues in the months to come. We have seen in the case of Aleppo how fast the humanitarian situation of trapped civilians can deteriorate, and that is the most concerning. I think all sides that are conducting these hostilities need to take a step back and really reflect about the consequences on the civilians who are trapped in these places.

Syria Deeply: For months now, there’s been talk in the media about the war in Syria winding down, so to speak. Does this recent spike in violence disprove this claim?

Krzysiek: Well, what we have seen, especially in the past couple of weeks, is that the situation is very much contrary to that. When we say that the intensity of violence is winding down in Syria, it is important to remember that this doesn’t mean that this fighting has stopped. That would be a very serious overstatement. Syria in the past seven years has seen several spikes in violence and then periods of relative calm, but it has very rarely reached the level of no fighting or no hostilities. The latest spike in violence shows us this fluctuation in levels of fighting pretty clearly.

The answers have been edited for length and clarity.

Hashem is the deputy managing editor of Syria Deeply. He has previously written for The Arab Weekly and The Daily Star. He has also worked with the Associated Press, where he focused on user-generated content. Hashem holds a masters degree in Middle East Politics from the School of Oriental and African Studies, at the University of London. He is a native of Beirut, Lebanon. 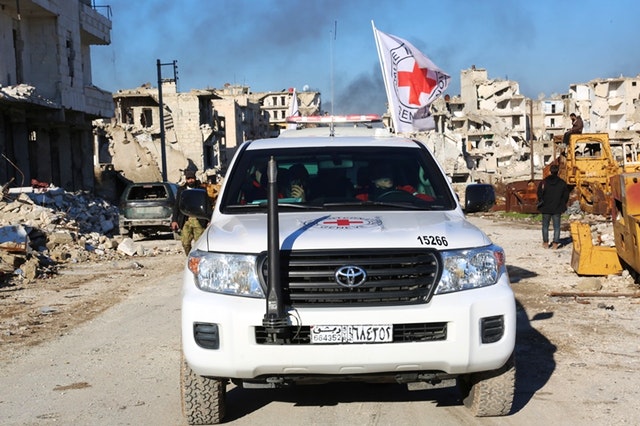