ISTANBUL (Thomson Reuters Foundation) – Syrian aid workers have pleaded for the international community to do more to protect them from deadly attacks, and to make sure aid reaches those most in need, saying statements of support need to be translated into concrete action.

Speaking on the second day of the World Humanitarian Summit in Istanbul, the head of a medical organization inside Syria said people are now moving hospitals underground and into caves since international attempts to end attacks on them have failed. 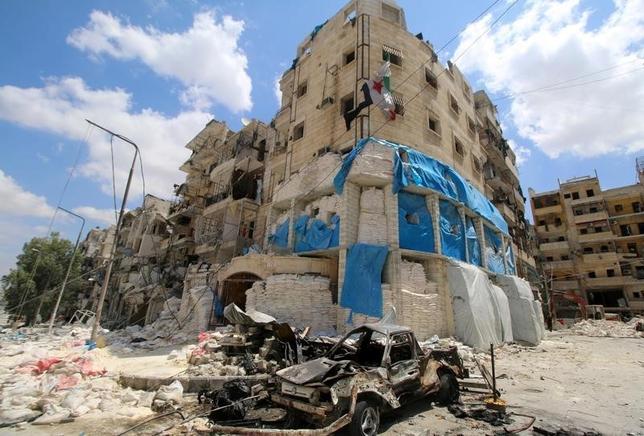 Burnt vehicles are pictured in front of the damaged the Medecins Sans Frontieres (MSF)-backed al-Quds hospital after it was hit by airstrikes, in a rebel-held area of Syria’s Aleppo, April 28, 2016. REUTERS/ABDALRHMAN ISMAIL

« Being a doctor inside the country means waiting for death, » said Zedoun Al Zoubi, head of the Union of Medical Care and Relief Organizations (UOSSM), which works in Syria.

« Instead of saving lives, you are concerned all the time about your own life because a doctor is the main target for air strikes, » he told the Thomson Reuters Foundation.

« Everybody knows that hospitals are the safest place in the world in a time of war, but in Syria they are the riskiest place. »

When one hospital tried to build an underground facility near a Free Syrian Army barracks, the armed opposition group asked them to leave, saying the presence of a hospital would mean the area would be bombed.

Earlier this month, medical aid charity, Médecins Sans Frontières, slammed four of the five permanent members of the U.N. Security Council for ties to attacks on hospitals in Syria, Yemen and Afghanistan.

MSF pulled out of the humanitarian summit, saying the U.N.-sponsored meeting would not hold states to account for their role in conflicts or pressure them to abide by the laws of war.

U.N. Secretary-General Ban Ki-moon told a discussion with Syrian aid workers in Istanbul that the attacks on hospitals amounted to war crimes, and the perpetrators should be brought before the International Criminal Court.

« Mobilising leaders to recommit to upholding the rules of law is one of the core responsibilities of the Agenda for Humanity which will be adopted at the end of today, » he added.

Speaking to the Syrian NGOs, he said: « While we are not able to meet all the requirements, we are doing our best. I ask you to be courageous and hopeful. »

« The least the (international community) can do is to provide a safe atmosphere for humanitarian workers, » Rouba Mhaissen, founder and director of Sawa for Development and Aid, which helps Syrian refugees in Lebanon, said in an interview.

This would include setting up no-fly zones, using air drops to deliver aid to areas cut off from all agencies, and ensuring that hospitals and schools are not targeted.

She also urged donors to channel more funds directly to Syrian NGOs, saying they have greater access to many of those in need, and fewer overheads than international aid agencies.

Syrian aid workers delivered 75 percent of humanitarian aid in 2014, but received less than 10 percent of cash funding available for the Syria response, according to recent research by Local To Global Protection (L2GP).

« Despite their crucial role, Syrian NGOs struggled to get their most basic costs covered, » said L2GP, which promotes local charities’ work in major humanitarian crises.

Mhaissen said one of the hardest things she and her colleagues face is to have to keep repeating the same messages to the international community « and not see a single change ».

« We go (into) the field and we experience firsthand raw human suffering, » Mhaissen said.

« Every time we think ‘this is the worst that can ever happen’, something worse happens. »

She said she draws hope from the Syrian refugees in the camps, and from speaking to people inside Syria.

« They are fighting still in peaceful ways for their freedom, for their dignity, » she said.