Being Syrian these days only ever elicits one response: « Oh, I’m sorry … it must be terrible for you … Have you got family there? » This reaction is understandable, given the nature of the information that emerges from the country, with coverage of death, destruction and displacement of people. While it is vital that the world is made aware of the suffering of the Syrian people, however, the complexity of the conflict can sometimes be forgotten.

What we tend to hear less about is the nonviolent movement (NVM), which has been playing a significant role since the start of the uprising, and which started in early 2011 with peaceful protests. At this stage the NVM had a much wider support base both domestically and internationally, with audiences sympathetic to its struggle. The number of army defections was also relatively high. However, as the government began to take violent action against the protestors, armed resistance inevitably emerged. This was followed by the development of the Free Syrian Army (FSA). The FSA’s lack of real organisation and an established central command made it easier for foreign extremist groups to enter Syria and hijack the uprising. They began to subvert it from a movement about freedom and justice into something very different. 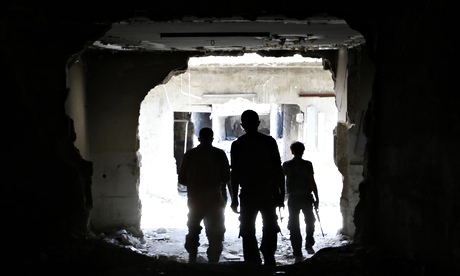 ‘It is among NVM groups that an alternative to the violent, dominant players in this conflict lies.’ Photograph: Nour Kelze/Reuters

Regardless of the fact that the NVM was never allowed to move beyond demonstrations into a fully engaged civil resistance, its members have continued their work in the face of hostility, kidnappings, detainment and death, perpetrated both by the regime and extremists attached to rebel groups. It should be noted that the NVM is by no means homogeneous. There are in fact hundreds of groups that emerged from it across Syria that vary in their activities and their means of organisation. There is diversity among the members of these groups, which incorporate Syrians from all classes, sects and religions. The activist Omar Aseel and members of the Syrian Nonviolence Movement have created a comprehensive directory of all these groups.

While the NVM organisations have been vital in providing humanitarian relief to besieged areas, their role goes far beyond this. Civilian-led local coordination committees (LCC) and local councils in many of the areas not controlled by the government have become key in the dissemination of information within Syria and internationally. Four prominent activists who worked on documenting human rights violations were kidnapped in December 2013 from the offices of the Violations Documentation Centre in Douma, which collaborated with the LCC Douma. A campaign is under way, Free #Douma4, for their release.

A large proportion of the work undertaken by the NVM is primarily concerned with rebuilding the economic, legal, civic, social, cultural and moral foundations of the country, promoting reconciliation and attempting to counter pressure from extremist groups. This has involved such things as the publication and distribution of pamphlets and magazines, and the production of art, the running of radio stations and workshops that attempt to remind people of the original aims and values of the uprising. Among the most internationally visible of these attempts is the satirical English language banners from the town of Kafranbelinstigated by the activist Raed Fares. Then there are events such as theFestival of Spring: Between Colours and Cultures, organised by a number of groups in Qamishli. They seek to use the arts as a reminder of the rich diversity of its population.

The NVM, over the course of the conflict, has had to adapt and reinvent itself. At this point, its supporters are all too aware of the fact that they are unable to stop the armed conflict, with many of its own members having turned to armed rebellion. However, for those who remain, it is understood that there is a need to focus on the post-conflict situation. It is here that the international community also needs to refocus its attention, establishing an understanding of Syria’s oppositional movements that extends beyond the armed and political opposition and beyond actors that fit within the limits of their own strategic interests. It is among NVM groups that an alternative to the violent, dominant players in this conflict lies.