Educational Reform for Syrians Must Not Ignore the Country’s Children

Humanitarian solutions to the education crisis facing Syrian children are largely ignoring those most in need, argues Middle East writer and researcher James Denselow. Children inside Syria are being overlooked.

PLANNING FOR THE future in Syria is not easy in the face of the country’s uncertain and brutal present. In the shadow of war, education has been largely overlooked, and what little attention the issue gets tends to focus on refugee children living outside the country. But for any solution to be effective it must not ignore those still inside Syria.

Some 5.7 million Syrian children need educational support, according to the United Nations. In Syria, one in four schools is no longer operational and UNICEF claims the education system lost 22 percent of its teachers – more than 52,000 people. There are over 2 million children (between 5 and 17 years old) out of school, the equivalent of all school-age kids in New York City, Los Angeles and Dallas combined, according to Save the Children. To make matters worse, there are 1.5 million children living in hard-to-reach areas and 200,000 living in besieged areas across Syria.

Put simply, it is a desperate time to be a member of Syria’s youngest generation.

Without access to schools, the children of this generation will be lost. The United Nations estimates that Syria’s increased school dropout rate could see a loss of human capital formation of up to $10.7 billion, or 17.7 percent of the country’s 2010 GDP. “Enrollment rates are now well below the regional average for sub-Saharan Africa,” Kevin Watkins, executive director of the Overseas Development Institute (ODI), wrote. Before the conflict, enrollment was almost 100 percent and the literacy rate was 95 percent for 15–24 year olds.

In human terms, this means children are disappearing from the classroom into early marriages, the workplace or even recruitment by extremists.

Today many school-aged Syrian children have never seen the inside of a classroom. Their right to education has become a casualty of the continued failure to find a path to peace. Tom Fletcher, the former British ambassador to Lebanon, is currently working on ensuring that Syrian children will be back in school come the start of the school year in September. He recently said that “it’s very hard to get education to the displaced communities inside the country.”

But getting children into schools is only a fraction of the problem. The International Network for Education in Emergencies (INEE) said that “schools are amongst the most dangerous places in Syria as a result of continued attacks or damage sustained in the fighting.” The lack of alternatives for internally displaced Syrian children, who have no access to a formal education in a safe and protected environment, is heartbreaking. According to Save the Children, many schools in besieged areas face shortages of basic resources such as textbooks, stationery and desks. In some areas, makeshift classrooms are set up underground, where students say that they “don’t see clearly because it is dark.”

It is, of course, a cliche to say that Syria’s children are the country’s future. But this simple soundbite is a reminder that unless more is done to reverse the disaster that has befallen the education sector, any future peace will be built on the fragile bedrock of a failed generation.

The factors preventing a solution to the education crisis in Syria are the same ones that have plagued the majority of the international aid response. The Syrian government has sought to control and regulate humanitarian access in areas under its control. Outside these zones, agencies struggle to secure access to opposition-controlled districts without losing access to government-controlled areas. What’s more, even if they do secure access, they find themselves vulnerable to the risks of indiscriminate targeting, as the concept of “protected spaces” has been rendered meaningless in Syria.

Operating as neutral actors in such a politicized space has become almost impossible. In June, the Syria Campaign accused the U.N. of losing its impartiality and claimed the agency delivers 99 percent of its aid to government-controlled areas. Technical solutions to Syria’s education crisis, such as improving the existing system or resourcing plans to get children inside Syria into safe educational facilities, can be successful only if aid organizations are able to work neutrally.

What makes accomplishing this even more difficult is finding a solution for the 900,000 children living in ISIS-controlled areas. ISIS runs schools and uses its own curriculum – one of five different curricula currently being taught to students outside of government-controlled areas.

At a meeting in London earlier this year, international donors recognized the importance of education for refugees, promising to get all Syria’s refugee children into school by the end of 2017. They even pledged $1.4 billion to achieve this goal. The pledges have yet to be delivered, but with the right political will, this is an attainable goal – in stark contrast to the challenge of providing education for those still inside the country.

At the very least, international recognition of the challenges and importance of education in Syria is needed before a focused response can be rolled out – one that can fill gaps in the current system with programs to help students catch up on missed classes, promotes self-learning and e-learning and addresses the hurdles of obtaining official accreditation and certification. Nelson Mandela famously said that “education is the most powerful weapon you can use to change the world.” Syria is sadly awash with weapons of all varieties except the most powerful one. 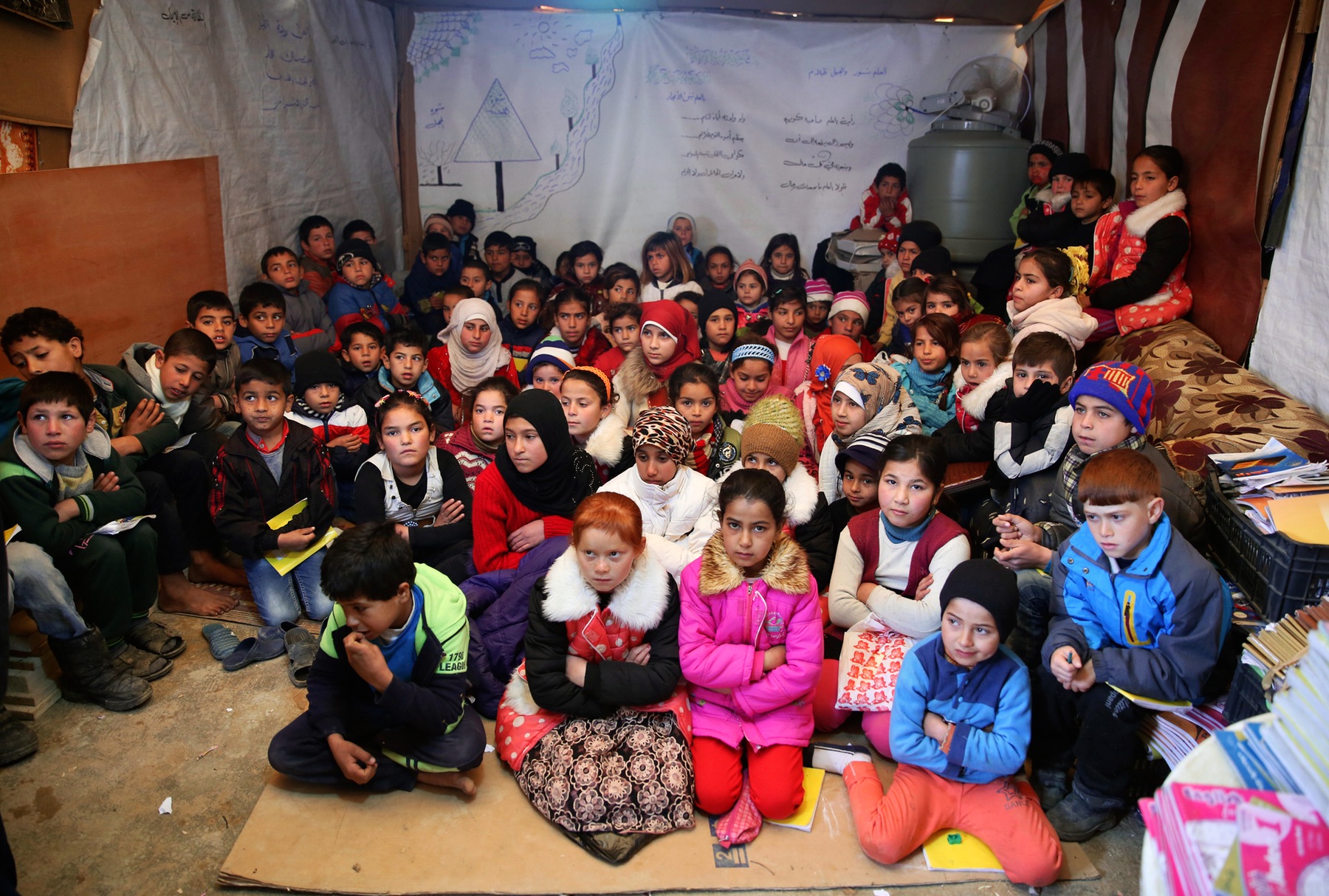 Syrian refugee children sit on the ground as they listen to their teacher inside a tent, the home of a refugee family that has been turned into a makeshift school, at a Syrian refugee camp in the eastern town of Kab Elias, Lebanon. AP/Bilal Hussein, File

James Denselow is a writer on Middle East politics and security issues and a director of the New Diplomacy Platform(NDP). He has worked extensively in the Middle East, including research for foreign policy think-tank Chatham House, writing and reporting for several media publications and for communications and advocacy work with international NGOs. He is a research associate at the Foreign Policy Centre (FPC) and a fellow at the Centre for Syrian Studies (CSS).