Europe needs to step up its game in Syria – Mazen Darwich

Europe needs to step up its game in Syria 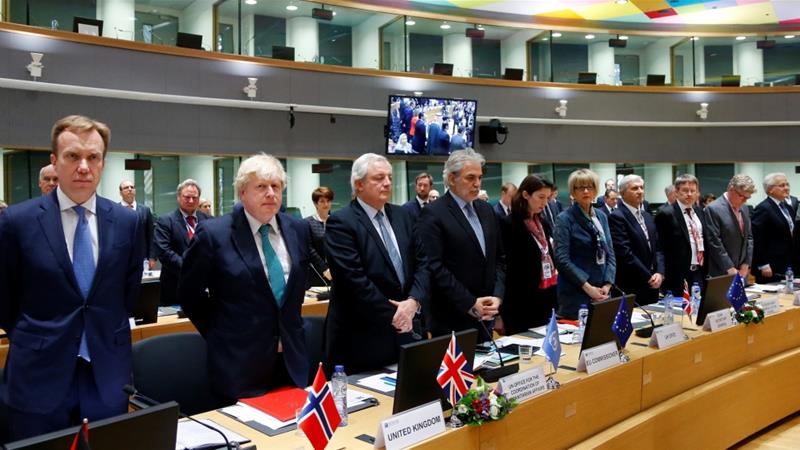 ‘I was in Brussels recently with other Syrian civil society representatives to meet with EU and UN officials to reinforce our key demands on protection, accountability, humanitarian access and especially the need for a meaningful inclusion of civil society in the Syrian political process.

Our discussions were overshowed by the heinous chemical attacks in Khan Sheikhoun, that resulted in the death of many civilians, including innocent women and children. The attack illustrated once again the urgent need for the protection of civilians if we are to see the end of a conflict that has gone on for too long.

That’s why when the US launched retaliatory strikes against the Syrian regime for the use of chemical weapons, we Syrians celebrated.

Nobody wants to ask for foreign intervention against its own country. But the US response was a long overdue international first step to protect Syrian lives. To be truly effective, the US action must now turn into a comprehensive mechanism to protect civilians not only from chemical attacks but also from all indiscriminate attacks against civilians that remain the biggest killer of civilians in Syria. Europe has a key role to play in this effort. European member states are well placed to work closely with the US to stem the violence across Syria and create the conditions for a genuine political solution.

Each day without the prospects of a viable political solution, the greater the threat of violence, instability, displacement, and extremism for Syria and the West. This is why solving the Syrian crisis is in the interest of Europe. Syria has triggered an epic refugee crisis that Europe has to manage at great costs. And Syria has spawned a dangerous terror threat that has already affected many European capitals as recently shown in the tremendous terrorist attacks in London and Stockholm.

The US decision to hold the Assad regime to account for the chemical attack has the potential to pave the way to a political transition in Syria. It can change – and has already changed – the calculations of the Assad regime. (Regime airstrikes against civilians dropped soon after the US action. This shows how the regime can respond when faced with credible international action.)

The prospects of protection will also create the necessary space on the ground to allow moderate voices and civilian structures to counter extremists. As I say, Europe has a key role to play in this effort.

First, European states should work with the US to deter all indiscriminate attacks against civilians. If civilians are seriously protected this will compel the regime to engage substantively in the Geneva process and will set the stage for a political transition.

Europe is also positioned to apply pressure on Assad and its allies. As a human rights defender, I urge Europe to use its economic powers to sanction Iranian and Russian individuals who are complicit in the Assad regime’s war crimes.

Thirdly, Europe needs to lead the accountability effort. As a former detainee, I can tell you that I – just like millions of Syrians who have fled Syria – will not return home unless credible measures are put in place to hold war criminals to account.

The current lack of justice only helps the extremist narrative. We need to address this head on. This is not about revenge. This is about finding a path forward where all Syrians can heal and have trust in a sustainable political settlement.

Finally, Europe should insist that no reconstruction aid would be given without a guarantee of a political transition. Otherwise, Europe will end up financing the Assad regime itself and will risk aiding and abetting his vicious war crimes.

I understand none of these options are easy. But they are not impossible if Europe shows political will. The real work on Syria’s future begins after a political transition, when Syrians are tasked with rebuilding a war-torn society. We know many questions will need to be addressed for stability to hold. What will be done to reintegrate displaced people? How will we address terrorism? How will we rebuild Syria’s destroyed infrastructure? What instruments are necessary for democracy to work?

For Syrian civil society, these challenges are not new. We have been working on these questions and doing the hard work for six years. We risk our lives to build a Syria that is free, democratic, and inclusive. Many, like myself, have spent years in prison for these efforts, enduring torture, physical abuse and even starvation. Too many more have brutally been killed in the process. Still, we will not give up.

That is why Syrian civil society members are among the best placed to help create sustainable peace. It is the activists, humanitarians, human rights defenders and educators who will be key to reconstruction, solving the refugee crisis, and combating extremism. We are ready to do whatever it takes to establish a free, democratic and stable Syria.

But to do so the international community must hear and respond to the concerns of the Syrian civil society. We are not a « nice to have », but a fabric of Syria’s present and future. Together, Europe and Syria’s civil society can still chart a course for Syria’s future. But first we need your help to stop the bombs and make justice prevail.’