ECCHR : Towards Accountability for International Crimes in Syria 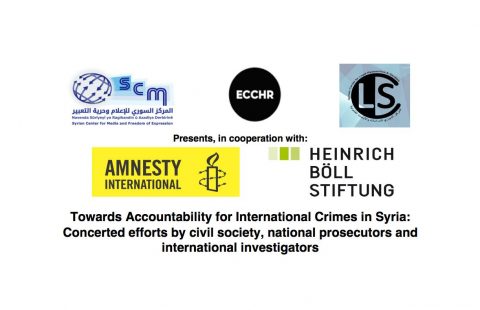 LIVESTREAM « Towards Accountability for International Crimes in Syria »

As one of the few countries with pure universal jurisdiction legislation, Germany is playing a key role in the fight for accountability for war crimes and crimes against humanity in Syria. In the course of an ongoing structural investigation concerned with international crimes committed by the Syrian government, the Office of the German Federal Prosecutor heard testimonies from torture survivors who, together with Syrian lawyers Anwar al-Bunni (Syrian Center for Legal Research & Studies, SCLSR), Mazen Darwish (Syrian Center for Media and Freedom of Expression, SCM) and the European Center for Constitutional and Human Rights (ECCHR), filed a criminal complaint against senior officials in the Syrian Military Intelligence Service in March 2017. As a further step, the group around Syrian military defector “Caesar” filed a criminal complaint together with ECCHR in September 2017.

Thanks to the tireless work of Al-Bunni and Darwish and the support of the Heinrich Böll Foundation, ECCHR has since then worked on further criminal complaints addressing international crimes committed by the Syrian government in detention centers in various locations over the country.

On 8 November 2017, SCLSR, SCM, and ECCHR will, in cooperation with Amnesty International Germany, and Heinrich Böll Foundation, bring together stakeholders from Syria as well as from the national and international level including Catherine Marchi-Uhel, Head of the UN International Impartial Independent Mechanism Investigating Serious Crimes in Syria.

Together, we will reflect on the ongoing and possible future efforts for accountability in Syria. The first panel will be lead by Syrian torture survivors and activists, who are at the heart of the criminal complaints in Germany against high ranking officials of the Assad government. The second discussion will shed light on gaps in documentation and challenges of preserving evidence in the context of judicial action addressing international crimes committed in Syria.

We are looking forward to welcoming you to this event and kindly ask you to register via mail to anmeldung@boell.de