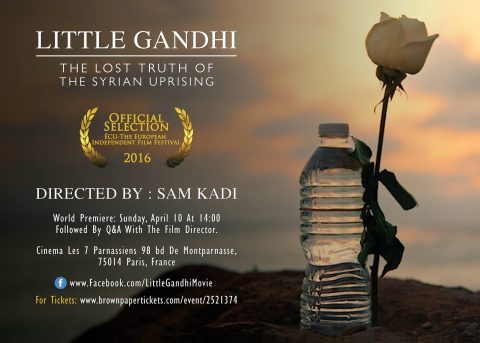 This documentary follows the life of peaceful Syrian activist Ghiyath Matar, who became internationally known as “Little Gandhi” for his initiative of facing security fire and violence with flowers and bottles of water. Ghiyath was a key organizer in leading peaceful protests in his homeland “Daraya” against one of the most vicious regimes in the 21st century, inspiring people worldwide. His brutal torture and death at the age of 26, merely a few months after his marriage with a baby on the way, outraged the international community and erupted one of the most violent uprising in modern history.

The film was made to build a better understanding of what the Syrian Revolution is all about and what it stands for. To unveil the truth about the real young educated Syrian heroes who initiated the movement in Syria way before the Arab Spring. To shed light on these brave Syrian activists who, according to them, were inspired by Martin Luther King, Jr. and Mahatma Gandhi. To remind the world about the lives that were sacrificed in order to keep the Syrian movement a peaceful uprising, in spite of the unprecedented violence by the Syrian regime. The filmmaker strives through “Little Gandhi” to share with the public, especially in the west, these inspiring stories that the international media in general intend to ignore in order to justify the cluelessness of the international community who has been witnessing the worst humanitarian disaster of our time.

In order to raise awareness and educate the world about the grave human rights situation in Syria, and via one of the Transitional Justice Programs sponsored by the International Development Research Centre (IDRC), the Syrian Center for Political and Strategic Studies (SCPSS) has co-produced a feature documentary film entitled LITTLE GANDHI.

“Little Gandhi” is a source of inspiration and a heroic story that needs to be told and shared with the rest of the world.

LITTLE GANDHI is directed by award winning director Sam Kadi. Mr. Kadi is the writer/director of critically acclaimed feature drama The Citizen. The Citizen was the recipient of five awards on the international film festival circuit, and was named among the “Best 10 Films of 2013” by Examiner.com.

Kadi has been recognized by the prestigious Cinema for Peace for raising awareness of human rights issues through motion pictures, and was invited to speak about the same subject before the International Criminal Court at The Hague, Netherlands in 2012. In 2014, the SHOAH Foundation, founded by acclaimed director Steven Spielberg, chose Kadi as a “Spotlight Juror.”