Every 60 seconds, a Syrian family flees their home

A record 33.3 million people remained displaced within their countries by conflict and violence in 2013, according to new figures released by the Norwegian Refugee Council. The majority of the 8.2 million « newly » displaced came from Syria, where a brutal three-year civil war has led to an estimated 150,000 deaths and a hollowing out of the country’s cities.
« Syria is the epicenter of violent, forced displacement,” said Jan Egeland, head of the Norwegian agency, in Geneva, where the organization’s data wing, the Internal Displacement Monitoring Centre (IDMC), is based.

There are nearly 3 million Syrian refugees now registered outside the country, but that figure is dwarfed by the numbers of those internally displaced. According to the data, some 9,500 Syrians fled their homes every day–a figure the IDMC claims amounts to one family fleeing every 60 seconds. You can see the surge of displaced peoples in the Arab world over the past decade in the graph below.

On Wednesday, foreign ministers from 11 western and Arab states convened in London for another « Friends of Syria » meeting, aimed at developing new means to aid the Syrian opposition as well as provide humanitarian assistance. The chances for progress are slim while the situation on the ground is grim.
The IDMC report details the difficulties faced by international aid organizations in providing support to Syria’s internally displaced, a task made all the more challenging by the cynicism and neglect of the warring parties in the conflict:

By failing to authorise access for relief agencies to those in need, including 240,000 besieged people in Syria’s contested cities, all parties to the conflict have violated IDPs’ basic right to request and receive protection and assistance. Humanitarian space shrank dramatically in the north of the country during 2013, around 46 humanitarian workers killed and a number of others were kidnapped. A lack of effective coordination made the delivery of assistance more difficult still, especially in the areas no longer under government control. 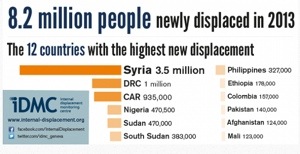 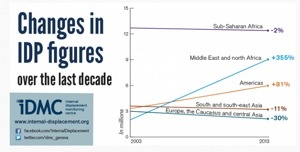 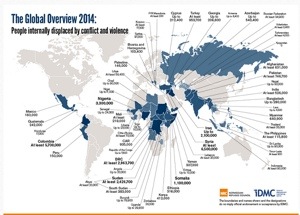