(Reuters) – In recent weeks Russia has stepped up supplies of military gear to Syria, including armored vehicles, drones and guided bombs, boosting President Bashar al-Assad just as rebel infighting has weakened the insurgency against him, sources with knowledge of the deliveries say. 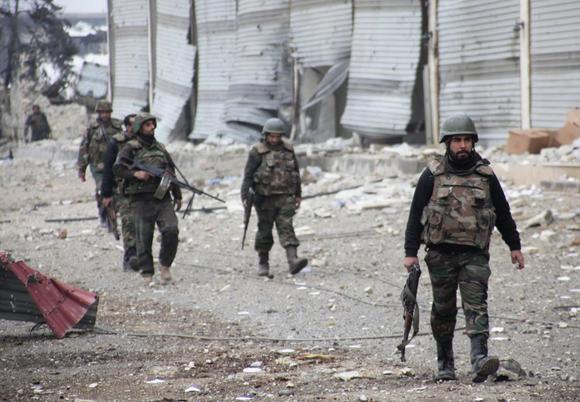 Moscow, which is trying to raise its diplomatic and economic influence in the Middle East, has been a major provider of conventional weapons to Syria, giving Assad crucial support during the three-year civil war and blocking wider Western attempts to punish him with sanctions for the use of force against civilians.

The new Russian supplies come at a critically fluid stage of the conflict, with peace talks scheduled for next week in Switzerland, the factious opposition losing ground, and Western support for the rebellion growing increasingly wary of the role played by foreign militants. Syria has even said some countries formally opposed to Assad have begun discussing security cooperation with his government.

Several sources told Reuters that Assad’s forces had since December received deliveries of weaponry and other military supplies, including unmanned spy drones known as UAVs, which have been arranged by Russia either directly or via proxies.

« Russian advisers and intelligence experts have been running observation UAVs around the clock to help Syrian forces track rebel positions, analyze their capabilities, and carry out precision artillery and air force strikes against them, » said the source, who declined to be identified.

Vyacheslav Davidenko, spokesman for Russia’s arms export monopoly Rosoboronexport, said they could not comment on arms deliveries to Syria.

Russia has said it violates no international laws with its military supplies to Syria and does not sell Damascus offensive weapons.

The U.S. State Department said it had no independent confirmation that Russia had increased military supplies to Syria but said such actions would be concerning if true.

« His view is that if these reports are true that would certainly raise great concerns about the role that Russia is playing in continuing to enable the Assad regime of brutalizing the Syrian people, » said Psaki, adding: « We don’t have independent confirmation of the reports. »

A source within the international arms industry with knowledge of Middle Eastern weapons movements also confirmed a pick-up in supplies to Assad’s forces, including UAVs.

« Equipment has been moving into Syria, and Russia is either bringing it in themselves or sourcing supplies from Black Sea areas like Bulgaria, Romania or Ukraine, where there is surplus stock floating around, » the source said. « Suppliers in that region cannot afford to upset the Russians. »

Arms trackers say Bulgaria, Romania and Ukraine all have stockpiles of Russian-style light arms that were produced in the countries dating back to the Soviet era, when factories were set up with help from Moscow.

« We have data that shows that Bulgaria has not authorized any arms sales to Syria, » he said.

Former foreign minister Solomon Passy said it was « very unlikely » that Bulgaria, as a NATO and EU member, would be involved in such shipments.

A Ukraine foreign ministry spokesman said the former Soviet republic had already denied allegations of arms supplies and transfers last year, when it said Kiev had voluntarily and completely stopped military and technical cooperation with Syria since May 2011.

Romania’s foreign ministry said its export control department had not registered or authorized any foreign trade operations involving military products, including light weapons, with Syria during 2013 or 2014.

The arms industry source said: « Stuff is definitely coming into Syria, and Russia realizes they have to keep Assad in power if they want to keep a hold of what they have there, especially with oil and gas reserves up for grabs. »

Russian oil and gas company Soyuzneftegas signed a $90 million deal with Syria’s oil ministry in December for oil exploration and production in a 2,190 square kilometers (845 square miles) bloc of Mediterranean waters off the Syrian coast between Tartous and Banias.

Syrian oil officials say they are confident their waters hold significant oil or gas reserves, pointing to substantial discoveries in the eastern Mediterranean off Israel and Cyprus and promising surveys carried out in the waters of Lebanon.

Moscow says its Middle East diplomacy is based on standing up for the principles of international law and upholding the role of the United Nations.

The situation also offers Russia an opportunity to show it still has weight on the world stage and to win potentially lucrative contracts once the fighting is over in Syria and the dispute over Iran’s nuclear program ends.

Russia is particularly keen to establish and keep a foothold in the Middle East through Syria and Iran because it lost out during the Arab Spring revolutions, particularly in Libya, where it had backed Muammar Gaddafi.

Reuters last week revealed that Russia is negotiating with Iran an oil-for-goods swap worth $1.5 billion a month that threatens to undermine sanctions that helped persuade Tehran to agree a preliminary deal to curb its nuclear program.

« Tank treads, helicopter blades, jet fuel, ball-bearings, gyroscopes – virtually every component of every piece of equipment can and will break down without maintenance and/or replacement. »

James Bevan of Conflict Armament Research, who tracks weapons for governments and other organizations, said Syria’s munitions use had been high for over two years.

« Further evidence of that is that they have been using barrel bombs dropped out of helicopters, which may suggest that they are running low on air-launched or air-delivered munitions, » he said.

Britain has accused Syria’s government of committing « yet another war crime » by spraying civilian areas with barrel bombs – oil drums or cylinders that are packed with explosives and metal fragments and dropped from aircraft.

BY AIR AND SEA

A Syrian opposition source said some supplies had been delivered to Syria’s Latakia airport around three weeks ago, with further equipment reaching through the country’s major cargo ports in Tartous and Latakia.

The source said the port of Tartous, which is also the location of Russia’s naval base, had been sealed off for several hours over three to four weeks ago.

« During the time, non-authorized personnel were not allowed to enter, and it is a sure sign a delivery came through. This happens from time to time when supplies come in, usually at night. »

The Middle East security source added: « Given the risk of rebel attack on arms depots and landing strips at Syrian air bases, Russia has also been shipping large amounts of small arms and munitions to Tartous and Latakia, allowing Assad’s forces to keep fighting apace. »

C4ADS’s Wallace said past shipments of Russian military cargo had also come by both air and sea.

« Lighter, less sturdy equipment often is loaded onto a plane, whereas large and heavy shipments typically are loaded onto a ship of some kind, » he said.

« Wheeled vehicles would need to be transported on a roll-on, roll-off ramped ship, but most smaller stuff could be containerized and loaded onto a standard cargo ship, » said Wallace, who co-authored a recent report into arms transfers from Russia and Ukraine. (For a link: here)

(Additional reporting by Timothy Heritage and Thomas Grove in Moscow, Tsvetelia Tsolova in Sofia, Pavel Polityuk in Kiev, Radu Marinas in Bucharest, Dominic Evans in Beirut, and Lesley Wroughton in Washington; Editing by Will Waterman and Gunna Dickson)