Feeding Aleppo Below the Bombs – by Alessandria Masi

Mercy Corps is one of the only international humanitarian groups providing food aid to opposition-held areas of Aleppo city. Its humanitarian director for Syria, Ashley Proud, explains how it delivers aid and how it is preparing for an impending siege of Aleppo city.

RELIEF AND DEVELOPMENT agency Mercy Corps has been operating inside Syria since 2008, and when the war broke out in 2011 it became one of the biggest providers of humanitarian aid to both government and opposition areas. But in 2014, nearly three years after the start of the conflict, the Syrian government gave it an ultimatum – stop working in rebel-held areas of the country or leave Syria.

The Syrian government’s demand was a clear violation of the United Nations Security Council resolution that states that all those in need of humanitarian aid be able to receive it, regardless of their location or allegiance.

At that point, Mercy Corps was able to reach 1.7 million civilians in the opposition-held northern part of the country – more than any other charity working in Syria. So on April 30, 2014, Mercy Corps shut down its headquarters in Damascus, and began working on an alternative way to get much-needed humanitarian aid to civilians in rebel-held areas.

Mercy Corps moved the base of its Syria operation to Gaziantep, a Turkish town on Syria’s northern border. From there, it was able to start cross-border aid deliveries, a multimillion-dollar operation being funded by several Western governments, including the United States Agency for International Development (USAID).

Mercy Corps was not the only humanitarian organization to make the move. Today, at least 30 international NGOs operating in Syria are based in Gaziantep, including such Western-funded organizations as the International Rescue Committee, World Vision, GOAL and Relief International.

Cross-border operations present a much higher risk for humanitarian organizations. Syrian president Bashar al-Assad has declared any such deliveries as a violation of the country’s sovereignty and a “pretext to aggression.”

The Syrian government’s decree against humanitarian operations is only one of several dangers associated with cross-border operations. Delivery routes from Gaziantep into Syria’s opposition-held areas are frequently the target of aerial bombings. The group in control of these routes and checkpoints, with whom organizations like Mercy Corps must negotiate for access, can change frequently and without warning.

Despite the increasing risks today, Mercy Corps is able to reach 570,000 people every month in Syria. In some areas, such as opposition-controlled Aleppo city, they are the only source of food for civilians trapped by the ongoing fighting.

The opposition stronghold of Aleppo city, the largest urban center in Syria, has been under increased fire from aerial bombardment since February when the Syrian government and its allies launched a major operation to take back the area. Months later, government-aligned forces have now nearly encircled the city and have cut off the most direct and prominent supply lines into the city.

Ashley Proud, Mercy Corps’ humanitarian director for Syria, spoke to Syria Deeply about the organization’s work inside the opposition-held areas of Aleppo, where hundreds of thousands of civilians are bracing themselves for imminent siege.

Syria Deeply: Mercy Corps is one of the few organizations able to bring aid into opposition-held areas of Aleppo, despite the Syrian government refusing access to these sites. How has your organization been able to achieve this from its base in Gaziantep?

Ashley Proud: Mercy Corps works across Syria with dedicated team members and in partnership with local aid associations. Our team in Syria operates at great personal risk – they are working on the front lines of the conflict. We know they aren’t doing it for us – they are Syrians and they are committed to supporting their communities. They know their work is essential. As the conflict drags on, more and more of the families we help tell us that we are their only source of food and that they have run out of money.

At Mercy Corps, we don’t believe that where you live or under which authority you live should impact your ability to feed your children. A civilian is a civilian, and brigades moving around your house or trading control of your town don’t change that.

Syria Deeply: Aleppo is considered one of the most dangerous cities in Syria today. What are the most basic needs of civilians living in Aleppo today, and what are some of the major security risks your team faces on the ground?

In rural areas of northern Aleppo governorate, Mercy Corps provides private bakeries with free flour for bread, with the agreement that they sell the bread – a staple of the Syrian diet – at an affordable price. Through this effort, we ensure that families can depend on inexpensive bread and bakers can stay in business, which in turn helps support the local economy.

Sometimes when the violence is very bad, our team members have gone door-to-door delivering food baskets to families, rather than have people gather in one place. Sadly today even groups of hungry civilians can become a target in Syria. We’re honored to have the opportunity to offer a little bit of relief in Aleppo and in other parts of the country.

Syria Deeply: Mercy Corps continued to operate in Aleppo after the fighting increased in February. How has the uptick in fighting affected your operations on the ground?

Proud: Right now we are very concerned because the increase in violence since mid-May has made it all but impossible to get trucks into Aleppo city. Thanks to our pre-positioning of stocks in the city, we are still able to support the people who count on us, but those supplies will not last forever.

We have been operating for several years now on the front lines of the conflict. Our teams are used to operating in frontline environments so when they feel the risks are too high it means that it’s just too dangerous right now.

Syria Deeply: In the last two weeks there has been a severe increase in the number of airstrikes in opposition-held areas of Aleppo. How have the aerial bombardments impeded aid deliveries?

Proud: On the most basic level, when there are airstrikes or shelling, trucks and aid workers cannot move. Right now, a significant increase in strikes has prevented us from getting supplies into Aleppo city for the past few weeks. Day by day and hour by hour we watch movements on the ground and identify the safest routes but trucks full of food and other supplies can present a target.

At the same time, airstrikes and clashes on the ground cause families to flee their homes in search of places where they will be safe. Mercy Corps is working in camps for displaced Syrians on the Syrian side of the Turkish border, as well as with people who have taken refuge in schools, mosques, with area families or have simply settled in the open air throughout Aleppo governorate.

When people are displaced, they often flee their homes with nothing. We are working as swiftly as possible to bring supplies into northern Syria, both to support civilians who remain in Aleppo city and to adjust our deliveries to meet the changing needs of those forced to flee.

Syria Deeply: Civilians and aid organizations are most concerned about the possibility of Aleppo city coming under siege. What are we likely to see in the event of a siege?

Proud: No one really knows for sure what is in Aleppo’s future. What we do know is that approximately 300,000 civilians inside the city rely in some way on cross-border humanitarian aid. We are deeply concerned that people will at some point be completely cut off from any humanitarian assistance. A long-term closure of humanitarian access into Aleppo would cause conditions inside Aleppo city to rapidly deteriorate. When access is restricted for a few days or weeks, we observe corresponding rises in prices of bread, diesel and other basics.

Stressful conditions bring out the worst in some people and the best in others. If there were a complete lack of access, we’d expect to see some people hoarding commodities in an attempt to make a profit off of higher prices as conditions worsened. But at Mercy Corps we see our team members inside Aleppo committed to staying in the city and working however they can to provide some measure of comfort to their fellow citizens. We are inspired by them and will do what we can to support them, whatever happens.

Syria Deeply: What measures is Mercy Corps taking to prepare for a siege of Aleppo city?

Proud: We are calling on the international community to prevent a siege situation, insisting that civilians be allowed freedom of movement if they wish to leave the city, and that unfettered humanitarian access be guaranteed so food, water, fuel and other essentials can be brought in.

Practically speaking, whenever we see increases in violence – clashes, shelling or airstrikes – we plan and prepare for the possibility that civilians will flee that violence in search of safety. We pre-position stocks, including what we call “new arrival kits,” which contain some household basics for starting over.

Over the past few months we have done our best to increase stocks of nonperishable food items in Aleppo city: dried dates, white bread, cooked chickpeas, salt, mixed spices, olive oil, canned fish and canned vegetables, rice, lentils and cooking oil. As soon as the security situation allows it, we will resume these shipments.

Syria Deeply: Mercy Corps works closely with individual civilians on the ground. From your conversations with those still in Aleppo city, what would you say is their most dire need at the moment?

Proud: More than anything, people tell us they want peace. The families we speak to want an end to the violence. Barring that, what needs to happen right now is that all parties to the conflict need to allow unfettered and safe humanitarian access to all parts of the country.

People tell us they want to be able to take care of themselves and provide for their families, and not depend on handouts. Our proudest moments are when we are able to offer a family seeds and tools so they can plant a kitchen garden or repair their family farm. We know it is possible to do more than just give people food and blankets. Even in the worst conditions of this war, people want to rebuild their lives and provide their children with education, comfort and a future. 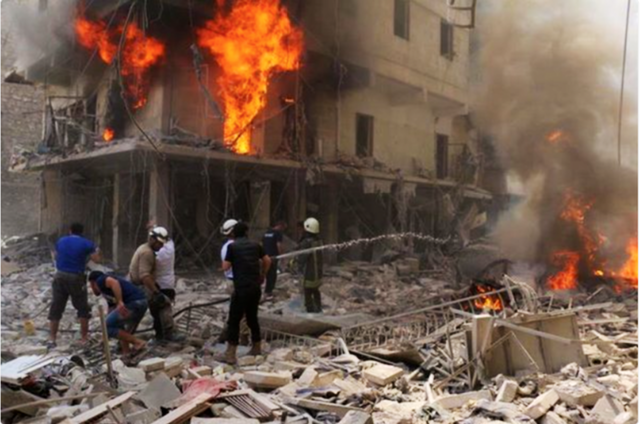 Alessandria is a Staff Journalist for Syria Deeply and Refugees Deeply. She is a native of Montreal, Canada and lives in Beirut.