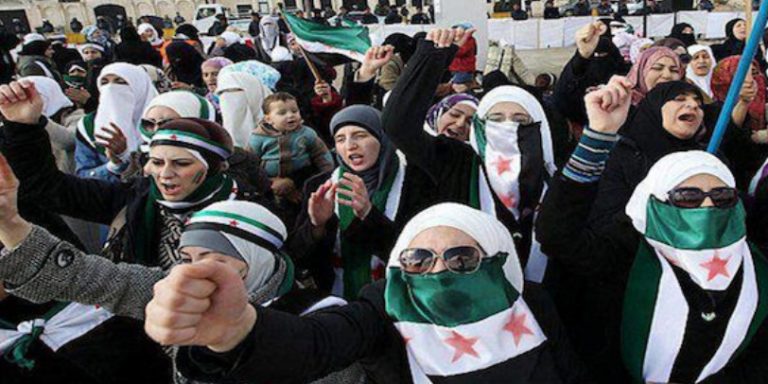 As eastern Aleppo falls, pounded by regime and Russian airstrikes, and stormed by Iranian sponsored militia on the ground, one young woman risks everything to communicate to the outside world the horror of the last days in the liberated part of the city.

Lina Shamy is in her twenties. She is one of many courageous activists using social media to describe the terror wrought on civilians trapped in the besieged, rebel held area with no safe place to flee. They are caught in the most tragic of circumstances, surrounded by death and destruction as barrel bombs, chlorine and phosphorous rain from the skies. As known activists, they cannot flee to regime held areas, where east Aleppo civilians have been shot, arrested or sent to the front lines to fight. Theirs is a waiting game.

At the time of writing, as another ceasefire deal collapses, Lina has just posted a video on Twitter. Standing on a balcony, she steadies the camera in one hand, the sound of relentless shelling in the background. “The criminal Assad regime and the Iranians have broke the ceasefire and are back to attack civilians,” she tells us. In another video she slams the international community for failing to respond to the human suffering engulfing Syria. “Isn’t it our right … as revolutionaries who refused oppression and slavery, who called for freedom and dignity to face this unjust regime with our voices and peaceful demonstrations without being exposed to arresting or to the worst kinds of torturing or killing or displacement?” she asks. Yet, despite the horror and deafening international silence over the obliteration of Free Aleppo, she retains faith that people will rise up, show their solidarity and call their political leaders to action. On 12 December, as horrific atrocities were were being perpetrated across the city, she appealed to the Twittersphere: ‘Humans all over the world, don’t sleep! You can do something! Protest now!’

Lina does not conform to lazy western (imperialist) stereotypes of Syrian/Muslim women as weak and submissive, as having no agency, oppressed above all by their own culture and religion. Nor does she conform to the orientalist portrayal of Assad’s opposition as all being crazed jihadi militants. She is a strong, revolutionary, Arab woman. She accepts neither Assad’s domestic tyranny nor invading foreign occupation forces. Through appearing on camera, she defiantly rejects traditional social mores, which often render women invisible or silent. Hers is a struggle against fascism, imperialism and patriarchy.

Far from being pushed to the sidelines, women have been at the forefront of the civil resistance to the Assad regime. In the early days of the revolution, before the security situation deteriorated, they  could be seen on the streets in large numbers, protesting against the state and its brutality. Women have played key roles in revolutionary organization. The two largest grassroots coalitions to emerge  in 2011 were both established by women: the Local Coordination Committees (LCCs) by Razan Zeitouneh, and the Syrian Revolution General Commission by Suhair Attassi. The LCCs were a remarkable example of horizontal, youth-led organizing and represented the very best of the revolution’s ideals: they were inclusive, democratic and non-sectarian. Women were active in the committees which organized civil disobedience and later humanitarian assistance, and also participated in the media work the LCCs undertook to communicate the messages of the revolution to the outside world. In Aleppo, Radio Naseem was established as the first women-owned independent radio station. Journalist Zaina Erhaim from Idlib, meanwhile, trained numerous women in citizen journalism and helped establish a Women’s Blog with the Damascus Bureau. The blog features stories of remarkable women from all walks of life who have responded to the revolution and war in committed and creative ways.

Women have also been at the forefront of resistance to some of the more extreme Islamist militias which grew in prominence as Syria burned. Some have implemented repressive measures against women, such as strict dress codes. Razan Zeitouneh, along with activists Samira Khalil, Wael Hamadeh, and Nazem Hammadi, was kidnapped in December 2013, most likely by the armed opposition group, Jaish Al Islam. Razan, an unveiled and fiercely independent human rights activist, was a strong critic not only of the regime, but of all authoritarian groups, including Jaish Al Islam. This was a likely reason for her abduction. In Raqqa, Jana, a woman’s organization founded for women to ‘assert their role in rebuilding their society and to take their rightful place next to men in the Syrian revolution’, carried out demonstrations against the hardline Islamist militia Ahrar Al Sham. They distributed bread when there were shortages and rehabilitated a high school. The women who founded Jana are all religious, yet they have struggled against political Islamism in the movement. Their struggle is against the authoritarian mentality. ‘Religion is a personal matter, and no one has the right to force it on other people,’ explained one of their members.[1]

In Daesh-occupied areas, women have bravely resisted the organization’s brutality. In 2013 schoolteacher Souad Nofal from Raqqa carried out a one-woman demonstration against Daesh every day for two months. Alone, she stood outside their headquarters holding banners –  one calling for the release of detainees, another showing solidarity with Christians whose churches had been destroyed. She became an icon of women’s resistance for Syrian revolutionaries. Eventually she fled to Europe. Others were not so lucky. Late last year 30-year-old Ruqia Hassan (known by her pseudonym ‘Nissan Ibrahim’) a Syrian Kurd living in Raqqa, was murdered by Daesh. A former philosophy student at Aleppo university, she joined the early protests against the Assad regime and when Daesh took over her city continued to speak out and document the horrific conditions of life under Daesh occupation. She provided regular updates on airstrikes by the international coalition and Russian forces. In one of her last Facebook posts she wrote “I’m in Raqqa and I receive death threats. When ISIL arrest me and kill me it’s ok, because while they will cut off my head, I will have dignity, which is better than living in humiliation.”

As the state collapsed women have often taken a leading role in supporting their communities and building alternatives to the state’s totalitarianism. Today they work as doctors, nurses and teachers in underground clinics and schools. They volunteer for the White Helmets and sacrifice their lives to pull victims of airstrikes from the ruins. They provide logistical support for armed groups and in some instances have taken up arms themselves, establishing women-only battalions. In the case of the Alawite general Zubaida Al Meeki, they have even trained Free Army fighters. As men have been rounded up for detention, or are killed in battle, women (including in more conservative communities) have challenged traditional gender norms and worked to provide for their families. In Banias women successfully negotiated a prisoner release, and in Zabadani women negotiated a temporary cease-fire to allow aid into the besieged town. Many women are more independent than before and have greater freedom in their life-choices. Of course the situation of war and displacement has also worsened conditions for many, with a reported increase in polygamy, early marriage  and sex work as women struggle for survival.

Throughout the areas liberated from the regime and Daesh, women’s centres have been established to overcome obstacles to women’s participation in the political, social and economic spheres. One example is the Mazaya centre in Kafranbel, Idlib. Founded by Um Khaled in June 2013, it runs a library and provides skills and educational training to women so they can achieve financial independence. In Douma, Damascus suburbs, the local council has established an Office for Women’s Affairs headed by Rehan Bayan who tirelessly campaigns for greater women’s inclusion in the opposition’s political bodies and encourages women to take more active roles.

The greatest threat to women’s political activism remains the regime. Even prior to the revolution, independent women’s organizations were prevented from operating. Those that were permitted were closely linked to the regime and dominated by socially privileged women from urban backgrounds who had little in common with the lived experiences of most ordinary women. Today female activists and humanitarian workers are targeted for arrest and detention where they face torture and sexual abuse. Mass rape campaigns have been conducted by pro-regime forces against dissenting communities. Rape and the threat of rape is a tool used by the regime not only to counter women’s political resistance through using their bodies as a site of oppression and humiliation, but also as a tool for controlling men and breaking community social bonds. Rape taboos, and traditional notions of honour and shame, mean that sometimes there is a social stigma around women who have spent time in detention, and rape can lead to divorce or rejection by the family. A tool of displacement, many have fled the country due to the threat of rape.

The Syrian Network for Human Rights reports that 13,920 women have been arrested or forcibly disappeared in Syria between March 2011 and November 2016, mainly by the regime. Yet, even in the brutal conditions of detention, Syrian women have shown their courage and agency. In July 2013, a group of female detainees in the infamous Adra prison went on hunger strike. They were indefinitely detained by the terrorism court, and amongst them were elderly, pregnant and sick women. The hunger-strikers demanded their right to a fair trial, to receive family visits and to access medical care.

Women in Syria face numerous challenges yet continue to struggle against fascism, imperialism and patriarchy. Yet with the partial exception of Syrian-Kurdish women in the north, they are absent from mainstream narratives on Syria, relegated invisible by the focus on military struggle, a male hegemonic domain. Syrian women play an essential role in the civil resistance and in community organizing. But they have received little support from western feminists or a left which prefers to see them as victims rather than the strong revolutionaries they are. The problem, of course, lies with western feminists and the left, not with Syrian women.