For Syrian Kids in Lebanon, School Is ‘Like A Miracle’ – by Annia Ciezadlo

A quarter of a million Syrian children are growing up in Lebanon without an education. We look at the obstacle course they have to cross to get into the classroom.

MARJ, LEBANON – Ahmad was 13 years old, but he looked nine. He swaggered through the schoolyard like a little boxer: feet spread wide, arms folded across his chest, trying to look tough.

“I used to love the other school very much,” he said in a husky bellow, flexing his shoulders to look bigger. “It was prettier and better. We would go to study. Math, English – I studied a lot. We were among friends, and we used to love to go there.”

The school Ahmad used to attend was run by the same organization as the one where he was standing, Kids for Kids, a nongovernmental organization funded by private donations. But there was one major difference: His old school was located directly inside Camp Rashid, the informal refugee camp in Lebanon’s Bekaa Valley where he used to live.

“This school has new friends,” he said. “But at that school I had all my friends. Here, they’re new. I don’t know them.”

In May 2015, the hundred or so families who lived in Camp Rashid got a warning from the owner of the land that they had 48 hours to evacuate. Everything in the camp was dismantled, including the school where Ahmad used to study. After that, he started taking a bus every morning to his new school, which wasn’t close enough for him to walk.

Even with the extra commute, Ahmad was one of the lucky ones. About half a million school-age Syrian children are registered as refugees in Lebanon. According to a new report by Human Rights Watch, over half of them – a quarter of a million kids – are not in school. Instead of spending their days in class, many if not most of them are working digging up potatoes, shining shoes, fixing cars or hauling bricks at construction sites.

The barriers to keeping kids like Ahmad in school are legion. But the main one lies in something outside the schoolyard itself: the instability of refugee life, where a parent’s work and housing, a child’s school, or even an entire camp can be uprooted overnight. When parents’ lives are precarious, children end up not attending school. “In order for many of these families to be able to send their kids to school, Syrian families in Lebanon have to be able to make a living here,” says Bassam Khawaja, Sandler fellow in the children’s rights division at Human Rights Watch. “The issues are tied very closely.” 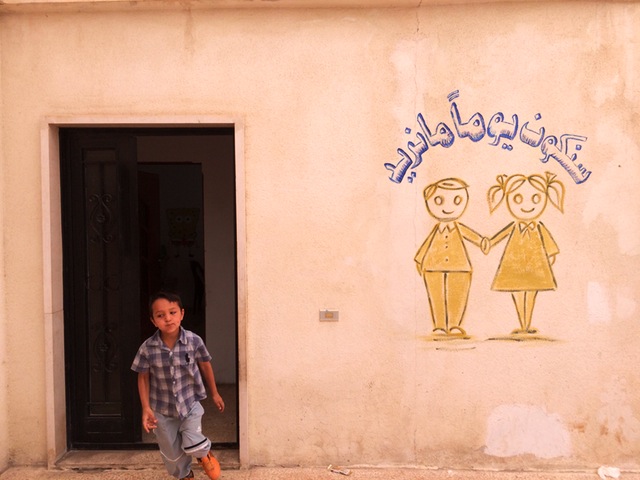 A Syrian child at an informal school for refugee kids in Lebanon’s Bekaa Valley.Annia Ciezadlo

Lebanon’s Ministry of Education has allowed Syrian children to enroll in public schools for free, with or without legal residency. This past year, 238 public schools opened a second “afternoon” shift especially for Syrian children. But Khawaja and the HRW team found a number of other roadblocks – many of them tied to the relentless difficulties of everyday life for Syrian families – keeping them from being able to enroll.

Lebanon, a country with a population of just under 6 million, hosts about 1.5 million Syrian refugees – 1.1 million officially registered with the United Nations High Commissioner for Refugees (UNHCR) and an estimated 400,000 unregistered. In January 2015, the Lebanese government imposed several new restrictions on Syrian refugees. In order to get or renew legal residency – which is essential for passing checkpoints, getting to work and carrying out other daily activities without getting arrested – Syrians have to pay $200 a year, sign a pledge not to work and, if they are not registered with UNHCR, find a Lebanese sponsor.

Because most of them can’t meet those requirements, humanitarian groups estimate that over two-thirds of the Syrians in Lebanon don’t have residency. And when parents cannot go to work without fear of arrest, their kids end up dropping out of school to work and support their families. The result is what Ola al-Junde, Ahmad’s former teacher from his old school, called “an epidemic of child labor.”

Many of the Syrian children in Lebanon are working – often at dangerous or backbreaking jobs like welding or picking tobacco. Of those, the vast majority are not in school, and probably won’t go back. “The child who is 13 or 14 years old when he goes to work, and starts getting money, even if it’s just a little, will become a worker and not a student,” says Junde, who now juggles her day job managing another school with volunteering at Kids for Kids (which has since changed its name to Gharsah Team, for a plant or seedling, especially one transplanted in a new place). “Even psychologically, there becomes a barrier between him and learning.”

Classes are free, but getting to them is not: transportation can cost from $10 to $50 a month, according to HRW. Even $10 a month is a lot for most Syrian refugees, about 70 percent of whom live below the Lebanese extreme poverty line of $3.84 per person a day, and 89 percent of whom are in debt. Ahmad and his friends were able to take a special bus, organized by Al-Junde; others are not so lucky. “It’s the relationship between the residency policy, and the economic or the livelihood situation of a refugee family,” says Khawaja. “This, and the economic situation that they’re living in, is what’s causing them not to be able to afford to send their kids to school, even though the enrollment fees themselves are covered.”

Even when families live close enough to walk to school, Khawaja found that many Syrian parents don’t feel safe allowing their kids to walk home, since the second shift ends after dark in the fall and winter, and Syrian kids are vulnerable to sexual harassment and attacks. Human Rights Watch documented extensive cases of Syrian students facing harassment, bullying and physical attacks from other students, bus drivers and even teachers.

Parents face hostility as well. School directors often impose arbitrary requirements on Syrian families, such as asking them for paperwork that the Ministry of Education does not require. Khawaja’s team spoke to one Syrian mother who tried to explain to one such school official that UNICEF told her she could enroll her children; according to her testimony, the school official threw her papers in her face and told her “go boil the paper and drink it with UNICEF.”

All of these difficulties build on each other, making an insurmountable barrier for Syrian kids. High dropout and low enrollment rates, for example, lead to a catch-22: Schools won’t offer afternoon classes in a given grade without a minimum of children (25 for grades 1–6, and 20 for 7–9). When classes in their grade level aren’t offered, Syrian students end up having to repeat a previous grade, and often drop out, further fueling the problem that put them there in the first place. 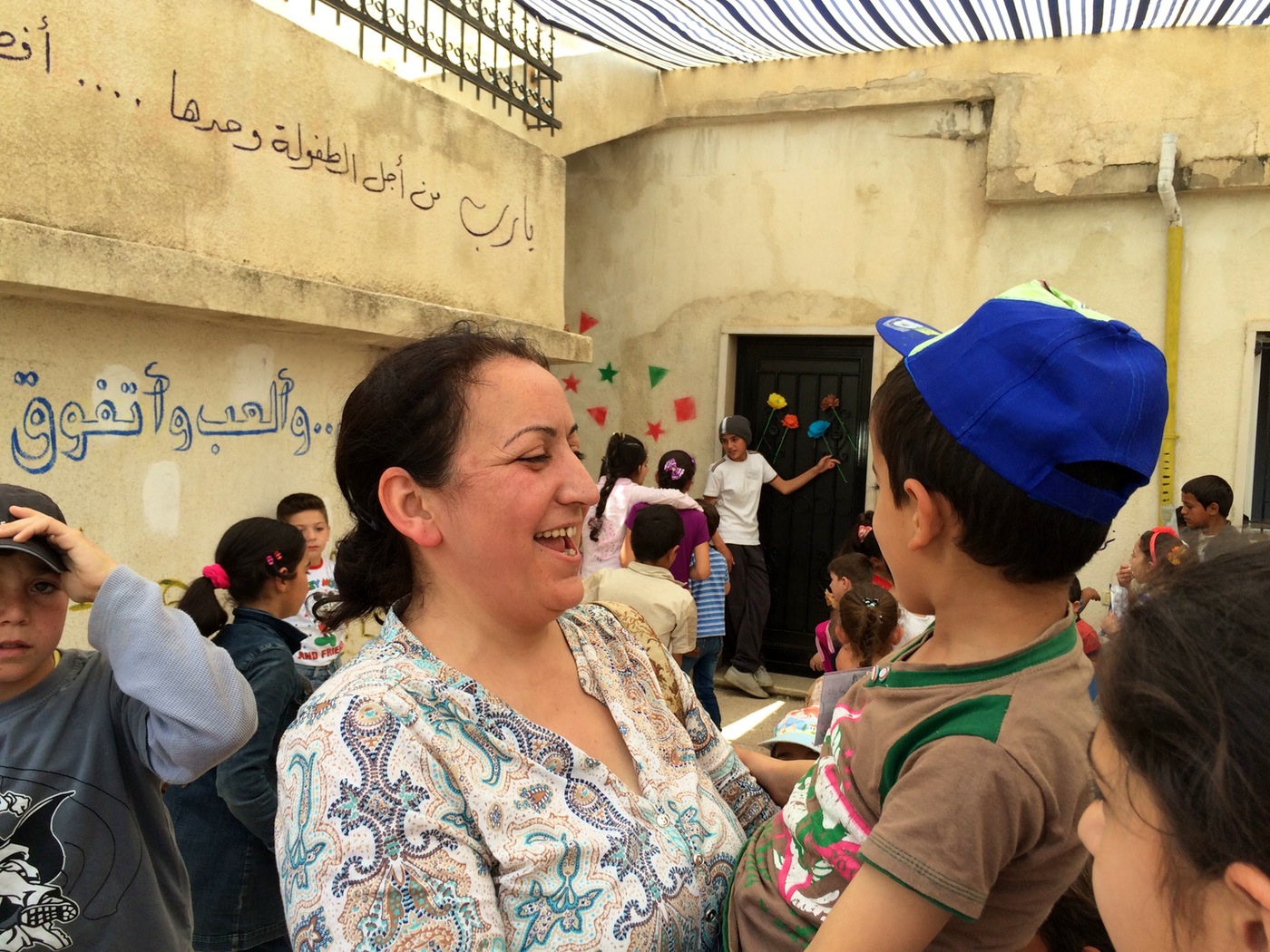 Ola Al-Junde, 43, is a Syrian math teacher who juggles her day job managing one school for Syrian refugee kids with volunteering at others. (Annia Ciezadlo)

Alternative schools run by NGOs like Gharsah Team can help, at least temporarily. Syrian parents from Rashid Camp said they felt more comfortable sending their children to schools inside their camp, with Syrian teachers like Junde and her colleagues, who know how to talk to children traumatized by war. “It’s like a miracle to us,” said a 35-year-old mother of five from Homs, who gave her name as Umm Hassan. “All of the kids were outside of the tents, doing nothing, and then they were getting an education.”

Unlike the official Lebanese schools, alternative schools are allowed to employ experienced Syrian teachers like Junde, who taught math for 14 years in Syria before moving to Lebanon during the war. Turkey, Jordan and Egypt allow Syrian teachers to work in public schools; Lebanon, which has by far the highest number of refugees per capita in the world, and faces internal political pressure against employing Syrians, does not. “This is something that Lebanon has refused to do, and I think they’re losing out on an opportunity to take advantage of that population,” says Khawaja. “We are asking for the Lebanese government to allow Syrians to teach in Lebanon, in whatever form, either in non-formal schools or as teaching assistants.”

But while alternative schools can fill the gap, only the official Lebanese public schools offer the accreditation needed for children to advance from one grade to the next. “We push our students in the alternative programs to go to the formal education,” says Junde. “We always stress that alternative education is a stopgap between the students who don’t attend school at all and the formal education system. We try to empower the students during one year so we can send them to official Lebanese schools.”

Ahmad was one of the success stories. A year and two months after leaving his old school, he is now enrolled in an official Lebanese school. He even goes twice a week to sing in a choir, says Junde with pride, “and he succeeded.”

Annia Ciezadlo is a Senior Editor at Syria Deeply. She has been living and reporting in the Middle East since 2003, focusing on the politics of food and civilian life during wartime. She was a special correspondent for The Christian Science Monitor in Baghdad (2003–2004) and The New Republic in Beirut (2005–2007). She is the author of the award-winning book Day of Honey: A Memoir of Food, War, and Love.