‘Green Poison’: A Film About Al-Waer’s Displacement and Suffering 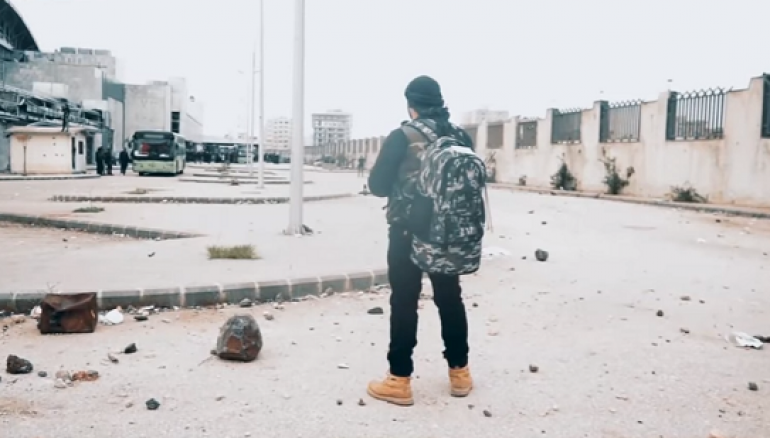 In his short film “Green Poison,” the young Syrian activist and director Hamam Abou Zein captures the suffering of displacement experienced by Syrians in the Al-Waer neighborhood of Homs before the regime’s forced relocation campaign.

The film while only a few minutes long shows us the beginning and the end of Al-Waer.

Speaking to Zaman al-Wasl, Abou Zein said that the film documents the bitterness of displacement and moments that can neither be heard nor seen. He added that he tried hard to highlight the pain of separation, parting from loved ones, parting from the homeland, and parting from Homs.

This is the sixth documentary by Abou Zein, who worked as a manager for Agency Homs Media. His other films which were shot during the siege of Al-Waer include: « The Unknown Soldier, » « The Tune of Remaining, » « Salt, » « Warm Touch » and « I Depart. »

Abou Zein explains that he had tried to overcome the bitterness of reality while he was filming, but that he could not control himself “facing this great amount of grief and injustice that we are experiencing.” « Green Poison, » whose title refers to the now infamous buses used to transport the forcefully displaced, was by his own admission his most difficult filming experience due to the deep sadness of departing from his city.

He said that he was certain that the residents of Al-Waer would be displaced and that the neighborhood would leave the opposition’s control. He explained that while this feeling was difficult for him to cope with, he insisted on completing the film.

Once again the camera, which has captured the suffering and pain of the besieged across the years, demonstrates how it is one of the heroes of Al-Waer.

Abou Zein, who is now displaced to the Al-Bab area in the Aleppo countryside, said, “The camera will remain my intimate friend that helps me to document all the challenges and transformations experienced by our revolution, from siege to displacement.” He added that he remains true to his revolutionary career and will continue no matter what the circumstances are and regardless of where fate casts him.