It’s been more than a month since some 850 political detainees in Hama’s Central Prison revolted, taking guards hostage and overrunning part of the facility. Negotiations are aiming at highlighting judicial malpractice and the release of about half of the prisoners.

SOME 850 POLITICAL prisoners in a prison in Hama, west-central Syria, have been in open revolt for over a month now, protesting against the prison management and calling on the Syrian government to put an end to show trials of political detainees, arbitrary detentions and the use of torture.

Hama Central Prison is a civilian detention center in which prisoners are allowed family visits, contact with the outside world and access to legal assistance. The facility’s political prisoners, which make up nearly half of the prison body, have all been detained for political dissidence since the uprising against Bashar al-Assad’s government began in early 2011. They have all been charged with terrorism.

Syrian journalist Shiyar Khalil, a former detainee, has functioned as the prisoners’ intermediary since the protests began, speaking to them via Skype and WhatsApp and relaying their messages to the outside world from his home in France.

“When they first told me about their plans, I told them they were insane and that the regime will kill them all without a blink of an eye, but they told me they have already made up their minds,” Khalil told Syria Deeply. “After realizing they were determined to revolt, I asked them how I could help. They told me they needed media coverage; they needed the eyes of the international media and rights groups to be on the prison, so that the regime wouldn’t commit a massacre.”

On May 2, following the announcement of a decision to relocate five of the facility’s prisoners to the notorious Sednaya prison outside of Damascus, known for torture and politically motivated executions. The five had been detained while participating in demonstrations in Hama in 2011, charged with participation in “terrorist activities” and sentenced to death.

To protest against the transfers, the inmates rioted, taking seven guards hostage in the process. “They closed the doors and blocked all entrances with metal beds and took seven prison guards,” said Khalil, who was speaking on Skype with several of the prisoners when the riot began.

The prisoners dismissed initial attempts by the head of the prison and security officers to negotiate with them.

All of the facility’s political prisoners had been charged by the Damascus “Counter-Terrorism Court,” which tries dissidents as terrorists and hands out arbitrary sentences, according to the Violations and Documentations Center in Syria.

“The prisoners, who have been through the Counter-Terrorism Court in Damascus, told the prison management that the sentences they were handed were unfair,” said Khalil. “Those 850 prisoners have been detained by the government since the beginning of the uprising, and therefore, were all tried as terrorists.”

When the riot first broke out, Khalil spoke to fellow Syrian activists and journalists, including former detainee Mazen Darwish, a well-known free speech advocate and president of the Syrian Center for Media and Freedom of Expression. They agreed to organize a media campaign to shed light on the developments in the prison.

Knowing that without the involvement of a powerful third party, they risked a potentially brutal government crackdown to suppress the riot, the prisoners first demand was that the International Committee of the Red Cross be involved in any negotiations between them and the regime. “Involvement of the ICRC was our [the prisoners’] assurance that the regime would not commit an atrocity in the prison,” said Khalil.

The ICRC sent memorandums to the Syrian government informing it of their request to enter the prison. While the government tolerated the ICRC’s involvement at first, it quickly dismissed the group as a “foreign body meddling with internal affairs,” according sources inside the prison, as reported by Al Jazeera.

The prisoners demanded the implementation of U.N. Security Council Resolution No. 2254 of 2015, which calls for the release of any arbitrarily detained person in Syria. They also demanded an end to military field courts, the Counter-Terrorism Court and the use of torture to extract confessions.

Military field courts are a common procedure employed by Syria’s security apparatus. Judges visit detention centers and hand out sentences to a number of detainees, spending as little as five minutes on each case. The detainee is tried without any legal representation, has no right to speak during the trial and the sentence is not subject to appeal. Death sentences are commonplace.

The prisoners also demanded the cancellation of all death sentences of political detainees whose confessions were extracted under torture or were sentenced by one of the pop-up military field courts. Evidence for the death sentences is often based on confessions extracted under torture. During interrogations, inmates have repeatedly reported being handed pre-written confessions to sign, which they often do to put an end to the abuse. They also demanded improvements in the living conditions in the prison, and increased access to basic needs like medicine, food and family visits.

So far, negotiations under the auspices of the ICRC have led to the release of nearly 180 political prisoners from the Hama prison. Talks between the prisoners and prison management, which began just one day after the riot started, led to the release of 32 detainees, including the five who were due to be transferred to the facility in Sednaya.

“Eight of the prisoners were moved to rebel-held areas in the north under the ICRC’s supervision, while the rest went back to their homes in Hama,” said Khalil.

Although they had successfully prevented the transfer, the prisoners pressed on with their protest as government troops encircled the prison, firing tear gas in through the windows before cutting the facility’s water and electricity.

Negotiations between the prisoners and government officials that began on May 5 led to a new agreement: 400 detainees would be released within a month, including 50 prisoners on the first day, 60 on the second day, in addition to the immediate admittance of much-needed food and medicine into the facility.

The agreement brought about a partial truce, as groups of prisoners were slowly released over the following days, although the numbers were much lower than the agreed-upon figures. Hundreds of heavily armed government troops remained outside the prison’s walls.

The number of prisoners released each day steadily decreased until May 23, when the government freed only seven prisoners, pushing the prisoners to riot once again.

On May 25, inmates took the prison warden, a police officer and nine prison guards captive, after Judge Rida Musa sentenced another 11 inmates to death and made arrangements for their transfer to the facility in Sednaya.

“After realizing that the regime could not be trusted to keep its promises, and after it continued to block the entry of food and medicine into the prison, the prisoners changed their rhetoric. It was either death or freedom,” said Khalil. “They demanded the immediate release of all political detainees in the Hama prison in one day.”

The prisoners released the police officer on May 31 in exchange for a return of water and electricity services to the prison. The government released another 15 prisoners on June 1, but since then, no other detainees have been discharged.

A collection of 55 organizations and 107 prominent individuals – including lawyers, judges, journalists and activists – released a signed statement on June 2 condemning the government for its failure to comply with the May 5 agreement. According to anonymous sources at the Damascus-based terrorism court, Judge Musa has refused to sign further release papers.

The 850 political detainees in Hama Central Prison are a small portion of the nearly 200,000 political prisoners in detention facilities across Syria. 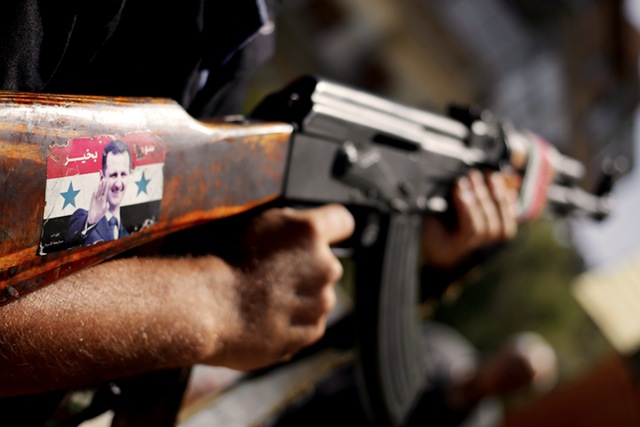 A Syrian soldier holds an AK-47 with a sticker of Syrian president Bashar al-Assad as he stands guard at a checkpoint in Damascus.AP/Hassan Ammar