Hezbollah is no longer obsessed with protecting Assad from falling, and is now seriously discussing the protection of its areas of influence inside Syria, as well as ensuring its supply routes and strategic depth 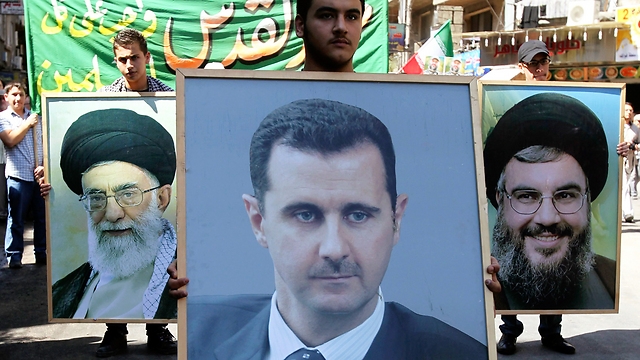 The rhetoric of Hezbollah’s supporters has somewhat changed as pragmatism has begun to sneak into their logic, especially among those who are familiar with events on the ground – either watching it or living it. This pragmatism may be the result of the Iranian pattern, ignited by the nuclear negotiations between Tehran and Washington and the signs of an upcoming alliance. Hezbollah media department understands these changes within their context and attempted to connect them to their reality, and to the reality of areas where they have faced defeat.

The first indication of this pragmatism – or this new rhetoric within Hezbollah’s youth movement – is the preparation for the post-Assad phase, either by moving to Plan B, which involves protecting their areas of influence from Damascus to the coast, or by giving up the fight inside Syria in order to defend their holy sites and the Shiite villages.

These people believe the Syrian regime – and its president – are sacred, and that in spite of all the progression, Hezbollah still insists on their involvement in Syria as a “sacred defense”, despite hints that the Syrian regime is no longer a fixed point in the international equation. As a consquence, negotiations on how to deal with post-Assad Syria are now taking place in Shiite villages in the Bekaa Valley.

A close associate of the party told al-Modon: “Hezbollah is no longer obsessed with protecting Assad from falling, and is now seriously discussing the protection of our areas of influence inside Syria, as well as ensuring our supply routes and strategic depth”.

Apart from enacting these policies, there is no problem in reconciliation and communication with the Syrian opposition to improve relations and security with neighboring areas close to pro-Hezbollah regions in Syria and Lebanon.

The party made no attempt to hide an escalation of its activity inside Syria as the Iranian nuclear negotiations dragged on. An informed source told al-Modon: “There is a tacit coordination with the international alliance, as Hezbollah now awaits the American green light through the Iranians to decide how to fight some battles on the Syrian land. What’s more, the party has no problem communicating with any opposition faction to negotiate on terms of the post-Assad phase.”

Hezbollah has started to show signs of its openness to negotiate with the Syrian opposition – whether political or armed – inside its own tactical boards. However, sources confirm there is presently no communication with the National Coalition, except for non-political military matters and exchange transactions. Sources also do not deny indirect negotiations were initiated by Hezbollah with Zahran Alloush, leader of the rebel group Jaish al-Islam.

Party supporters are convinced that it is time for settlements. Close associates of the party believe that the winds of Vienna will push the negotiations towards the front of Qalamoun. One source told al-Modon: “the calmness of the Qalamoun front is the result of the ongoing negotiations between Hezbollah and Nusra Front. These negotiations are blocked by the regime, which will play the major role of allowing Nusra fighters to pass through its territories toward the Syrian territories”.

The party’s confident tone has changed much since the beginning of the Syrian revolution. No longer convinced of its own invincibility, Hezbollah has since replaced its theory of ‘divine victory’ with political realism, fostered in part by US-Iranian negotiations in Vienna. The party is clearly convinced that no one can win the war in Syria, as all await the ‘grand settlement’, which will run from Vienna through to Qalamoun, and perhaps even Zabadani.