« After my father died, we continued digging the hole so we could have a place to hide from the planes that fly over our heads every day to take photos and bomb us » 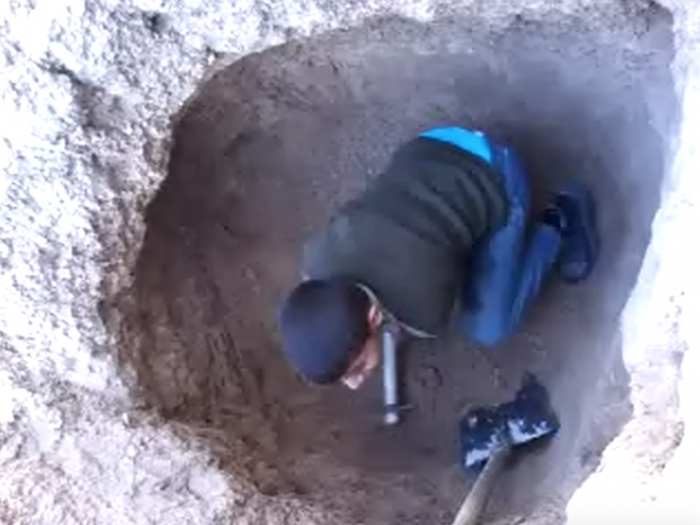 He left them a hole in the ground. His son completed the digging, and hid there with his friends from the Russian-Syrian raids.

The warplanes fly daily over Ghouta, leaving massive destruction in its towns and cities, and panic in the eyes of its women and children. So it was not strange that the people there, old and young, tried to leave their houses, this time not toward Europe but toward the ground. They dug holes in the ground to escape from the death that surrounded them.

« After my father died, we continued digging the hole so we could have a place to hide from the planes that fly over our heads every day to take photos and bomb us, » said 12-year-old Abdul Rahman. He told us how he and his friends, Majed and Fadi, had since finished digging the hole – a secret place where they can play and enjoy the simple freedoms that this war has taken away from them.

Four years of siege and shelling over Ghouta has forced its people to accept their reality, and to defy the death that has taken thousands of their lives by hanging on to a small spark of hope. The air raids increased after the Russian planes joined the Syrian planes in targeting the cities and towns of Ghouta, compelling some of the locals to search for ways to survive the death that falls daily from the sky.

Abdul Rahman’s father was spotted two months ago by some of his neighbors digging a hole in the land opposite his house.

« For more than two weeks we watched him digging a hole in the ground using basic tools, » said Abu Abdullah, one of his neighbors. « Later, we found out that he was digging a hole to hide with his family from the heavy shelling, especially after the multiple random Russian and Syrian raids. »

Abu Abdullah said that Abdul Rahman’s father spent more than 15 days working on the hole, but he died before he could finish it, when a raid targeted his house while he was resting.

« While his wife was visiting her brother, the warplanes targeted their house and Abu Abdul Rahman was killed instantly, » said Abu Abdullah, pausing for a moment, « maybe he felt he was going to die soon, he was so afraid of these raids that killed many people. We can only say there is no might nor power except in God, rest in peace Abu Abdul Rahman. »

But his death would not see the end of his work, as the body may die but the ideas survive. His son took off where his father had left. The neighbors were surprised to see Abdul Rahman and his friends, a week after his father’s death, completing his father’s work. They took turns digging the hole and using the same basic tools his father had used.

« The hole was almost ready, my father, may his soul rest in peace, had dug a big part of it and we were able to continue. We took turns until we finished the hole, which became a place for my friends and I, » said Abdul Rahman. “Now when there is a raid or a plane taking photos, we run to hide inside the hole.”

When they finished digging, Majed and Fadi covered the hole with wooden and zinc boards. They slip into the hole and quickly close the cover before the planes can find it from above. Inside, it has become their own small world, full of life and childhood, and far away from the grownup world outside with the scent of death and gunpowder.