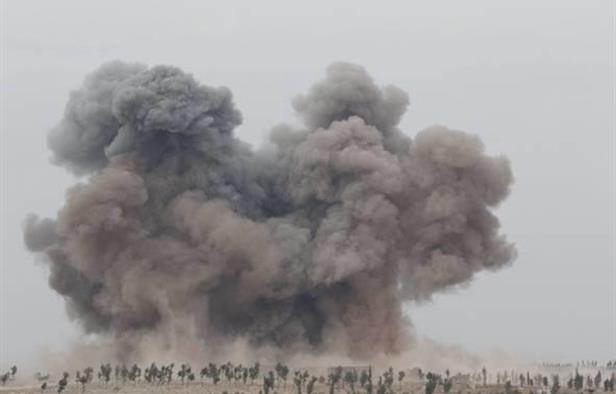 The bombing of Shanshrah, seen from Kafranbel. (Courtesy of Raed Fares)

An area of over six square kilometers ignited all of a sudden. The whole region was ablaze in seconds. Kafranbel-based Raed Fares said he has seen the town being bombed by the Syrian regime before. “But I have never seen anything like this in my life,” he told NOW, minutes after the Russian jets had bombed the outskirts of his town. “I don’t know what kind of missile this was, but the impact was huge, scary.”

The Russian jets showed up around noon on Thursday and the bomb hit an archeological Byzantine complex in the vicinity of Kafranbel. “It used to be a refugee camp until recently, but the Free Syrian Army brigades returned the civilians to their homes in the towns in the area so that the historical monuments wouldn’t be damaged,” he said.

Kafranbel is a small town in Syria’s Idlib Governorate. Before the war it was home to roughly 15,000 people, mostly Sunni Muslims. It was Syria’s largest producer of figs and a major producer of olives. It also sits on a dead Byzantine city and is surrounded by some of the famous Forgotten Cities, the 700 abandoned settlements in northwest Syria between Aleppo and Idlib that were abandoned between the 8th and 10th centuries. Serjilla, Shanshrah, and Al-Bara are close to modern-day Kafranbel. The Russians bombed Shanshrah, a UN World Heritage Site, twice on Thursday. 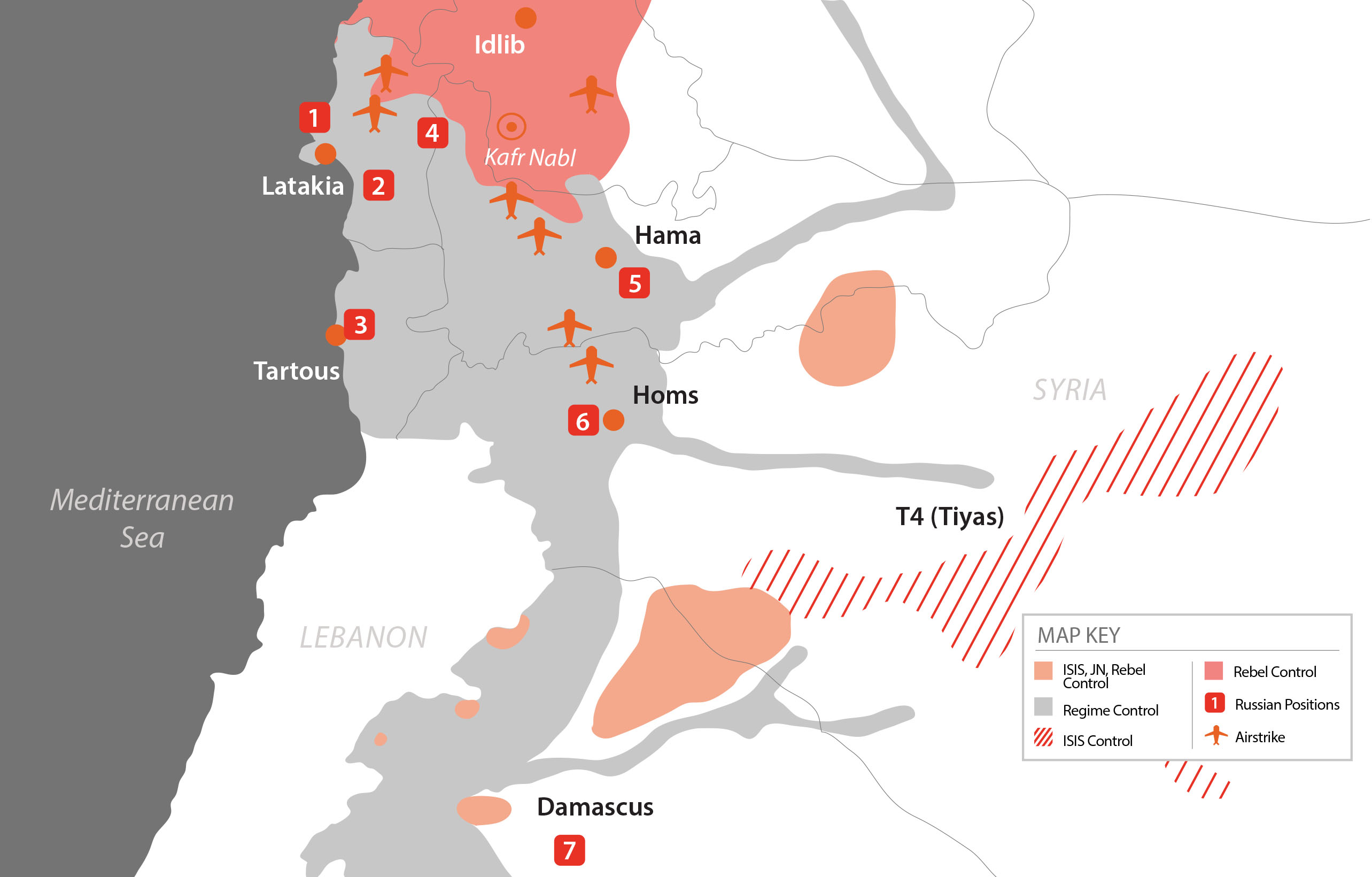 A map of the Russian airstrikes in Syria. (NOW/Tania Radwan/Source: The Institute for the Study of War)

The US-backed rebels and the Byzantine ruins

The Forgotten Cities, many frozen in time, trace the transition from ancient pagan Rome to Christian Byzantium. But during the Syrian war, refugees that fled the regime’s bombings found shelter in the Byzantine ruins. Most of them came from Maarat Naaman and Jabal al-Zawye, an activist from Kafranbel told NOW. They built houses on the ruins and rebuilt rooms with broken walls and simply lived there. They also lived in the ancient caves that once served as cemeteries, the activist said.

According to Khaled Issa, a freelance photojournalist based in Kafranbel, an Ahrar al-Sham brigade and a group of the town’s residents that police the area decided to evacuate the displaced people and move them to Kafranbel. The militants set up checkpoints around the ruins to protect them from damage and theft. “It is a touristic area, it has a green field. Fortunately, today is a day off and it’s very possible that there were no civilians there,” he told NOW.

The activist in Kafranbel told NOW that residents expected the town itself to be bombed. “We think the air strikes targeted Ahrar al-Sham. We have no Islamic State militants here,” he insisted.

The little Syrian town that could

Kafranbel has become famous over the past two years not for its ancient ruins but for the residents’ witty banners and social media campaigns against the Assad regime. Raed Fares is the man behind the town’s Twitter account, Facebook page and the town’s website Liberated Kafranbel. Activists there have conquered the Internet with their amusing banners and posts in English. The latest was about Russia: “It is queer to let the Russian bear destroy Syria, while the US donkey is enjoying chewing hey [sic] on its borders,” it read.

Kafranbel is a well-known center of the opposition against Assad, but it has never been taken over by extremist groups and ISIS has kept away. “The closest ISIS location to Kafranbel is at least 100 kilometers away. Those ruins were protected by Ahrar al-Sham brigades and Kafranbel residents because they were stolen and damaged many times,” Issa said.

Fares said that their relentless secular spirit is what kept the extremist factions at bay. “We are fighting Al-Nusra Front, ISIS and other extremists;we are fighting them over the radio stations, organizing demonstrations, publishing magazines, spraying graffiti on walls; by opening centers to support women, and psychological support centers for children. We also have centers to document human rights violations,” Fares said.

Why was Kafranbel targeted?

According to Kremlin spokesman Dmitry Peskov, the Russian military selects its targets in cooperation with the Syrian Army. “We have a list of terrorist organizations. We know them,” he said. It’s the first time that a Moscow official has admitted that the Russian air strikes are not just targeting ISIS, but also other rebel groups.

In the meantime, Reuters quoted well-informed Lebanese sources as saying that Russia, Iran and the Syrian government are planning a ground offensive in northern Syria. The report claims that hundreds of Iranian troops have arrived in Syria to join Hezbollah and the Syrian regime for a major ground offensive in Idlib and Hama Countryside, to be backed by Russian airstrikes.

Thursday was the second day Russia conducted strikes on rebel targets in Syria. On Wednesday, Russia struck several of what what it said were ISIS targets in mountainous areas in Hama and Homs Governorates, but opposition sources said that fewer extremist groups were hit and 40 civilians, including 8 children, had been killed. Russian Foreign Minister Sergey Lavrov said the reports of civilian casualties had not been verified.