How the U.S. fragmented Syria’s rebels by Jonah Schulhofer-Wohl 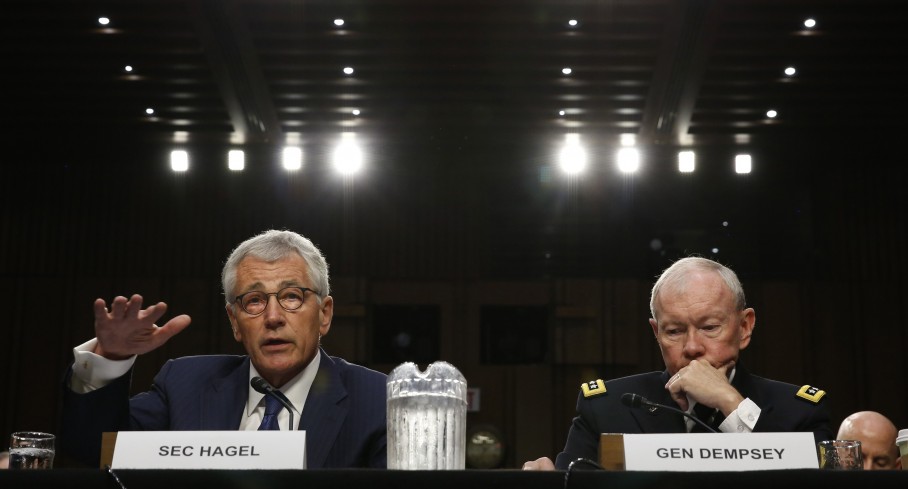 Secretary of Defense Chuck Hagel (left) and Chairman of the Joint Chiefs of Staff Gen. Martin Dempsey testify during the Senate Armed Services Committee hearing on U.S. policy toward Iraq and Syria and the threat posed by the Islamic State on Capitol Hill in Washington on Sept. 16. (Kevin Lamarque/Reuters)

Last week’s votes in Congress brought the Obama administration one step closer to taking military action in Syria as part of its new strategy for confronting the Islamic State (formerly known as the Islamic State in Iraq and Syria, ISIS). American failure to take early, decisive action to prevent a power vacuum in Syria was a significant factor in the rise of ISIS. Such action could have been taken far earlier. One of the main sources of U.S. reluctance to do so has been the fragmentation and radicalization of the armed Syrian opposition. But this concern over acting in Syria mistakenly identifies the character of the opposition as the source of that fragmentation and radicalization.

In fact, dynamics within the war itself and not the inherent nature of the opposition have contributed significantly to the current disarray. In an ongoing research project on alliances and infighting between Syrian armed groups, I show how infighting among the opposition’s military formations increases when and where the fighting against the regime of President Bashar al-Assad has become stalemated or indecisive. The implications are two-fold. Fragmentation and radicalization in Syria were driven by factors that allowed the proliferation of armed opposition groups and by the absence of military support designed to bolster their offensive capabilities.

When the sources of the state of the armed opposition are weighed against U.S. policy on Syria since the war’s outset, the picture is clear: A hesitant U.S. role was central to the fragmentation and radicalization of the opposition. Particularly to blame are the combined failures to coordinate the actions of other pro-opposition states, to provide timely financial and military support to the opposition, and to use military support to produce qualitative changes in the opposition’s capabilities vis-à-vis the regime.

Such a causal story offers a different reading of ISIS’s swift organization of a militarily effective force, its barbaric violence and its consolidation of territory from Syria into northern Iraq. While the rise of ISIS might appear to confirm the worst fears of those who argued that the United States should not support the armed Syrian opposition, in fact it shows the opposite.

For the skeptics, Syrian moderates were few and far between; the organizational and military success of extremist groups showed the true face of Syrian society. With radical Islam clearly – and naturally – ascendant in Syria, efforts to support the Syrian opposition would only undermine U.S. interests.

But that persistent belief in the need to divine the true nature of Syria’s opposition, with the nagging suspicion that perhaps there were never really any moderates for the United States to partner with – see the outcry over aFree Syrian Army-affiliated fighter’s cannibalism in May 2013 – obscures four processes that shaped fragmentation and radicalization, and created the conditions out of which ISIS emerged as a threat to U.S. interests in the region.

First, the armed opposition formed within a strategic environment favoring the creation of autonomous groups with loose, decentralized relationships. The initial extreme military asymmetry favoring the Assad regime meant that a dominant, hierarchical group would have led the opposition to a swift demise. Fragmentation was not a sign that the armed opposition was inept, but rather that it understood the challenge it faced and adapted accordingly.

Second, the bonanza of uncoordinated financing, from an array of states within the region and private individuals created incentives for a further proliferation of armed groups, and facilitated their ability to continue to operate independently from one another. Private fundraisers often collected money for specific offensives that the opposition was to carry out. For their part, commanders requested funding piecemeal, advertising the amounts needed to produce tactical outcomes, from attacks on checkpoints to the use of car bombs.

Third, foreign governments and private donors often brought their ownIslamist agendas to the table. The Islamic political platforms, symbols and rhetoric of the majority of the armed opposition groups show much about the available sources of support. Islamist groups built stronger organizations and obtained weapons and funds more consistently than their secular or so-called moderate counterparts. Saudi Arabia, Qatar, the United Arab Emirates and Turkey channeled resources to Islamists – albeit ones of different stripes – who could rely on steady funding from private sources in the Gulf states if support from these governments dried up. Secular groups that looked to the United States and European states for support were weakened when little of it materialized, either mired in a vetting process that delayed aid from the United States, or due to a frequent Western insistence on going through the leadership in exile rather than directly to the commanders on the front lines. At the individual level,fighters moved to join well-resourced Islamist groups. Given this instrumental component to the Islamization of the opposition, higher levels of Western military and financial support – if provided expeditiously – could have prevented radical Islamist groups from occupying a dominant position within the opposition.

Fourth, as the armed opposition wrested control from the Assad regime and managed to secure defensible positions in some areas of the country, particularly the north, relative security from the regime removed that principal driver of cooperation between groups: The pressing, common military threat. Groups often cultivated the same local constituencies, a budding political competition that they could now resolve through force of arms. The ensuing infighting favored those Islamist groups that could draw on deep coffers and plentiful weaponry. After a coalition of opposition groups seized Raqqah from the regime in March 2013, Jabhat al-Nusra drove the forces of the weaker al-Farouk Brigades from the area. ISIS repeated this pattern in August 2013 when it targeted a smaller group, Ahfad al-Rasoul, destroying the latter’s headquarters in Raqqah and prompting its withdrawal from the area.

A United States invested in success in Syria could have worked to great effect to promote cohesion and ward off the radicalization of Syria’s armed opposition. Rather than stepping back and trying to gauge whether groups in Syria could overcome centrifugal forces, the United States could have prevented fragmentation by providing timely military and financial support and coordinating the large flows of military aid and funding from rival regional powers that otherwise worked at cross purposes. Coordinated, large-scale assistance would have limited the opportunities for such a large number of opposition groups to operate independently. In addition, by dwarfing the efforts of private donors, coordinated state support would have also sidelined this pernicious radicalizing force.

Finally, the war in Syria has been characterized by stalemates in some areas, fleeting gains and losses in others. U.S. airstrikes could have been used to knock the Syrian air force out of play and degrade the regime’s advantage in artillery, allowing the opposition to pursue lasting offensives. An opposition engaged in taking the fight to the regime could have avoided the infighting trap and thereby staved off radicalization.

Why emphasize a litany of “could haves”? Beyond providing an accurate accounting of the processes of fragmentation and radicalization within the war, this analysis challenges the notion that the state of the armed Syrian opposition evolved independently of the American stance on Syria, that a U.S. policy of cautious deliberation had no harmful, unintended consequences. In the coming days, the policy debate over President Obama’s new strategy to take on the Islamic State will establish the perception that any ultimate success or failure stems from the merits of the strategy itself. Yet if it is judged a success, we will not understand the responsibility the United States bears for the further implosion of Syria witnessed over the last year and the factors that allowed ISIS to flourish and become a threat to the region. And, if it is judged a failure, we will wrongly conclude that disengaging from the Middle East is the most prudent future course of action. In sum, we will fail to grasp the dangers of a policy of hesitance and inaction.

Jonah Schulhofer-Wohl is an assistant professor of politics at the University of Virginia.

Recent Monkey Cage posts on developments in Syria and Iraq include:

Ora Szekely: What’s next for the Syrian regime’s non-state allies

Morgan L. Kaplan: Why the U.S. backed the Kurds

Laurie A. Brand: The Islamic State and the politics of official narratives