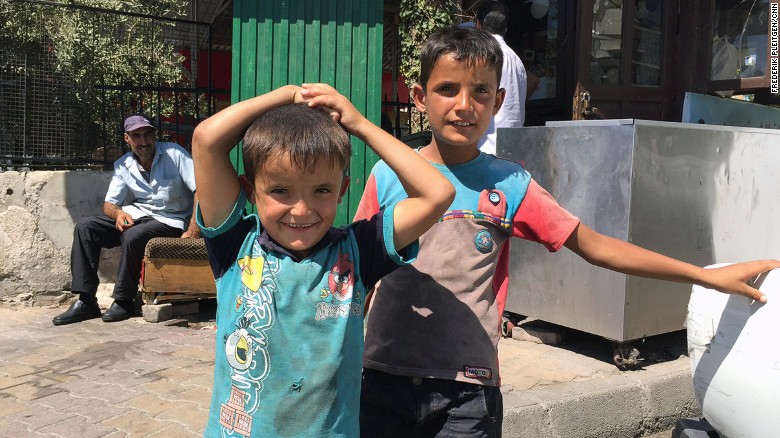 A child in Aleppo, Syria, is asked to draw a picture at school.

He paints a world on fire: helicopters dropping bombs, a house collapsing into rubble. He draws himself, crying on his knees, surrounded by his friends — dead, dismembered, decapitated, and bleeding.

This is the type of sad reality that we have seen far too often as physicians working inside Syrian field hospitals — children across the country living in hell. It is time to act if we are to prevent such heartrending scenes being played endlessly into the future.

Every day we were in Syria we saw innocent people suffering and dying in abysmal conditions. On the worst days of shelling and airstrikes, there weren’t enough hospital beds to accommodate the injured. Indeed, there were sometimes so many patients lying on the floor that there would be no place to step.

We saw children shot in the head by snipers. Even pregnant mothers were not spared shots to the belly. We saw children burned, mutilated and dismembered by barrel bombs and mortar blasts. We still remember seeing all the head wounds — skin ripped open by shrapnel and the overlying gauze mottled with pieces of brain tissue. These children wouldn’t make it.

One night, rescue workers pulled two children from the rubble after an airstrike. One of them was caked in blood and dust. He was crying for his mother. Doctors inserted a tube into his chest to expand a collapsed lung, and they managed to save his life.

The other never regained consciousness. His open wounds were still bleeding, so he was covered in a white shroud to conceal his shrapnel-riddled body. No one knew his name, and no family came to look for him. As time passed, the white cloth became soaked with blood and stained the bed. He was eventually taken to be buried — another Syrian child invisible and forgotten.

All of these horrors represent the new normal for Syrian doctors and nurses. All of the ones we met have become so accustomed to slaughters and massacres that they are simply accepted as a routine part of their daily lives.

The most recent airstrikes on Douma, a town in rural Damascus, underscore the horrific targeted attacks the Syrian government commits against residential neighborhoods, schools and markets throughout the country. This day of attacks led to the death of more than 100 people, including many women and children. Hundreds more were injured. The U.N. under-secretary-general for humanitarian affairs, Stephen O’Brien, was only 10 miles away from Douma on a mission to investigate humanitarian needs when these attacks occurred.

These atrocities are taking place right under the watch of international officials, yet without real accountability, there is no end in sight even as attacks continue to devastate the lives of Syrian civilians. After four years of inaction, the Syrian people deserve better, and the medical and aid workers trying to help them need protection.

U.N. Security Council resolutions 2139, 2165 and 2191 have called for such protection and demanded greater access for aid agencies. Yet these resolutions have so far accomplished little and represent the failure of the Security Council to effect meaningful action in Syria.

What can be done?

Coalition-enforced no-bombing zones in northern and southern Syria would be one way to put these resolutions into effect and would at least be a good place to start. True, this not a new idea, and it certainly would not end the war. However, it could at least alleviate some of the suffering and save lives in the process. Schools, hospitals and bakeries in these areas would not be threatened by Syrian government airstrikes. This would help stem the flow of refugees and allow displaced civilians to return home with access to food, water and vaccinations. Meanwhile, the United Nations should pressure the Syrian government to stop its aerial attacks on civilians and lift its humanitarian blockades.

Many armed parties in this conflict have at some point targeted civilians with conventional weapons. But the Syrian government’s airstrikes and blockades have been particularly devastating, killing thousands and causing thousands more to flee their homes.

Members of the Syrian American Medical Society, which supports field hospitals and communicates with medics under fire, have long experienced such atrocities, bearing witness to the recurring nightmare for four years. They see helicopters dropping bombs. They amputate obliterated limbs. They see infants dying from malnutrition and curable diseases. They resuscitate civilians who are choking and foaming at the mouth from exposure to chemical weapons.

Undoubtedly, ordinary Syrians are the best hope for rebuilding the country after such horrors and for combating extremism. But if they are to return home to begin this process, Syrian families need to be free from the fear of losing limbs to bombs, choking on chlorine gas, or dying from cold, hunger and disease due to military blockades.

Syria’s children deserve to be safe, but they need the protection of no-bombing zones. We hope that one day these children’s crayon drawings will show blue skies and secure homes, not a living nightmare where hell falls from the skies.

Dr. Samer Attar is an orthopedic surgeon at Northwestern University who has gone on surgical missions to Aleppo, Syria. Dr. Zaher Sahloul is a past president of the Syrian American Medical Society, a nonprofit group representing more than 5,000 Syrian-American physicians. The views expressed are their own.