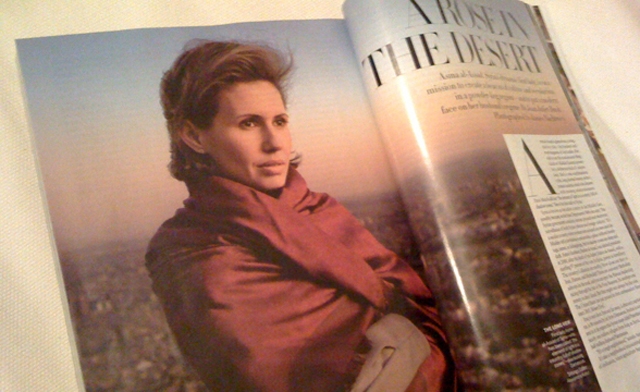 New emails revealed by WikiLeaks have dealt a new embarassing blow to Syrian first couple, Bashar al-Assad and his wife Asma, who spared no expense in having their image polished. (Photo courtesy The Atlantic)

Syria’s regime, currently in the midst of international criticism due to handling of protests and known to be one of the most discrete secret-serviced-based governments, has been subjected to a recent wave of leaked emails in the media.

Since last month, Assange has been holed up in the Ecuadorian embassy in London, seeking political asylum to avoid being extradited to Sweden on rape charges.

WikiLeaks began releasing over two million emails on their website from Syrian government officials that it claimed would allegedly embarrass “not only Damascus, but also its opponents”, according to WikiLeaks spokesperson Sarah Harrison, who spoke during a news conference last week.

The range of files extends from the intimate correspondence of the most senior Baath party figures, ─ including President Bashar al-Assad himself ─ to records of financial transfers sent from Syrian ministries to other nations, WikiLeaks said.

WikiLeaks said that although it had not yet verified all the emails due to their significant volume, it was “statistically confident” the vast majority of files were genuine.

A closer look at the hacked emails, undoubtedly reveals considerable efforts by the Assad regime and its supporters to “please the West” and polish its image as it has been accused of waging a brutal crackdown on Syrian citizens since a popular uprising broke in March 2011.

Human rights organizations estimate that 17,000 people have been killed since the start of the uprising.

Assad’s ‘obsession’ with the English language

Lamis Omar, a PhD student at Durham University in England, and reportedly an employee at the Syrian Ministry of Presidential Affairs, has surfaced as Assad’s new female friend in the leaked emails.

Apart from exchanging poetry and some “intimate notes”, Omar appears to be the President’s English language advisor and translator.

Omar sends regular advice and criticism of the President’s English vocabulary and grammar, and even though she always starts by “excusing herself”, she corrects Assad and proposes he use certain English expressions in his interviews.

In one of his emails, “Sam” sent dozens of English idioms to Omar, to which she replies “I very much like your academic curiosity for metaphors.”

Assad writes to Omar: “This is an idioms test program on my phone. I wanted to share with you some of the idioms that you may know or not. But don’t dream about English terms tonight, have a normal sleep, goodnight.”

A New York based public relations firm has become one of the latest international agencies to be exposed for aiding Assad’s communications team.

Brown Lloyd James is alleged to have been paid $5,000 a month last year to improve the image of the Assad family while Syrian forces were carrying out a bloody crackdown on protestors.

“In our view, the President needs to communicate more often and with more finely-tuned messaging and the First Lady needs to get in the game,” they wrote.

“The campaign should be branded with a forward-looking title, such as ‘Syria al-Yaum, Syria Bukra,’ (Syria Today, Syria Tomorrow)” it advised in another email.

One striking name appears in one of the emails sent by Brown Lloyd James: that of their Account Executive, Sheherazade Jaafari (Sherry), the daughter of the Syrian ambassador to the U.N., Bashar Jaafari.

This is not the first time Sherry’s name has been leaked, or linked, to Assad and his regime.

In early June, it was revealed that the 22 year-old press aide to Assad was granted admission to the Ivy League university, Columbia, on the recommendation of veteran U.S. broadcaster Barbara Walters.

Walters later released a statement expressing her “regret” for her role in Jaafari’s placement at Columbia.

Prior to hiring Brown Lloyd James, the Syrian regime had also requested help from foreign experts for their media communications. James Forbes was one of the professionals who was apparently recalled to Damascus to work with the regime.

When asked to comment to Al Arabiya on his association with the Syrian regime, the founder of Forbes-Associates said he did not want to speak at the moment.

Forbes’ last day at the Communications Office of Ministry of Presidential Affairs was on August 1, 2007, nearly five years before the popular uprising began.

After the revelations of the Syria First Lady’s penchant for Louboutin shoes and Art Gallery’s episodes were leaked few months ago, new emails leaked by Wikileaks confirm her extravagant lifestyle.

New emails reveal that Asma al-Assad reportedly hired a foreign landscape company to design her gardens at one of the presidential properties.

Randle Siddeley, the fourth Baron Kenilworth, manages a landscape and architecture company in the UK and reportedly charged thousands of pounds for a new garden at the ruling family’s country residence near the coastal city of Latakia.

Only last year, Siddeley wrote an email requesting to meet the First Lady in Damascus.

In 2010, British MP George Galloway, wrote to Shaaban asking for Syrian support during the Freedom Flotilla’s journey to Gaza. Galloway ended his message saying: “Please convey my respect and my admiration to His Excellency the President.”

Shaaban’s correspondence with Bobby Sager also stands out. Sager is an American billionaire who later dedicated his life to philanthropy and the founder of the Sager Family Traveling Foundation and Roadshow, a foundation that focuses on empowering leaders in areas of conflict and crisis, including Rwanda, Afghanistan, Pakistan, Syria, Zimbabwe and Palestine.

Two weeks after the start of the Syrian revolution, Bobby Sager, who was on visit to Damascus wrote to Shaaban: “The Syria that I spent last week in does not resemble the sensationalist images that are endlessly played and replayed by the international media. I feel privileged to consider you and President Assad as friends”.

As the Assads were working intensely on several fronts to promote a trendy, Westernized image of the regime, the leaked emails also reveal the latent attitude of some Western companies towards one of the most criticized governments on the international scene.