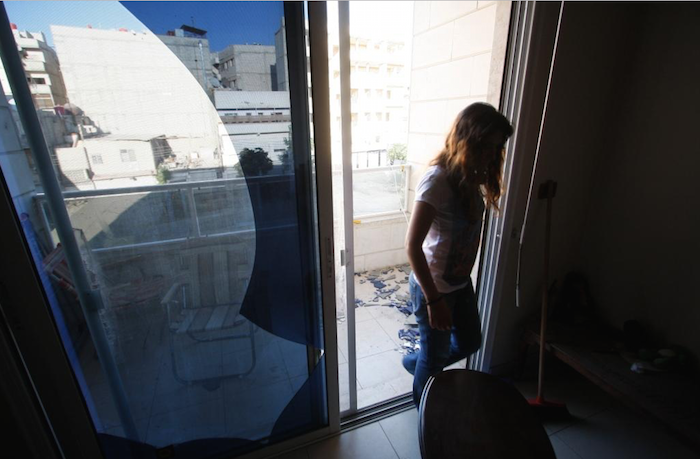 I am Sarah Jamil. I am not Tina Modotti, nor do I know anything about Revolution.

On the day of Good Friday; the 22nd of April 2011, I saw people dressed in gray. Their eyes looked like the eyes of tame wolves deprived of their will for decades. Their cheering was more like moaning re-echoed by the sleeping monitored mountain: « Freedom .. Freedom. » The Syrian regime gets terrified. Collective force of the masses is its scaffold; omnipotence is the essence of fear. In contrast, the judgment of conviction is a mental alternative to the bitter frustration, among the demonstrators.

I used to spend my days all alone in my house that lies a short distance from the eastern entrance of al-Ghawta; the countryside of Damascus. The entrance was adorned with photos of Assad. Once I imagined that there must be a certain statue standing at the entrance of some nearby town, where Assad appears naked, his member covered behind a scarf of stone, while an intelligent dwarf of an agent is surrounding his leg in an embodiment of the person who considers himself, the country’s sole demon.

Their voice thundered as if it was the voice of great quantities of water being pumped to the rural residential complex after long absence. It overwhelmed the silence of Damascus, warned it and its clumsy motion, under the presence of the security and intelligence in the Abbasids’ Square, and the spread of snipers on the roofs. The residential crust of Damascus is both fragile and sequential, just like the skin of an onion; nothing comes after its removal but fake, lustful tears. I thought this was a spontaneous agitation caused by villagers whom I used to see on a daily basis, taking their place in the micro bus, conglobating in the tiny corridor in between the seats, or crammed on them in discomfort in order to reach their homes, under a volcano of life’s curses. Their clothes were covered with dust, while their hearts kept singing and shining with light through the darkness of night.

I was stuck by a bout of hysterical weeping when the demonstration swept by me. In that day, people came from different rural areas but their destination was one; the Abbasids’ Square, which lies in the center of the capital; Damascus. When I was a little girl, I was once compelled in Lailat al Qadr to go and pray in the mosque. An attack of hysterical tears overwhelmed me then, when I saw Sheikh al-Bouti bursting in tears in al- Īmān Mosque, in the neighborhood of al-Mazra’a. I thought he was sad for my misery, so I cried long and in vain.

While watching them I cried, as if in a process of purifying my soul in the presence of Allah from the sins of obeying the Devil. I got inspired by one of the demonstrators to wait until the next day in order to join the Syrian revolution at the Umayyads’ Square. He mumbled that we will be there in millions, standing shoulder to shoulder. I got carried away and started taking photos then sending them anonymously to be published.

A road between Damascus administrative municipality and the countryside has let me down. It pierced and cut me to pieces. I; who know nothing what so ever about the revolution apart from the faces of these rebels. The next day, the taxi driver who locked all the doors around me said: “We have removed their bodies with bulldozers. Do you know that I have also taken part?” I told him: “It is a duty. We must bulldoze the brains, if you think about it. Drop me here!”

In the siege of the countryside you ought not to breathe. Emptiness of the roads crumples over the heads of protesters, like balloons. Passing a street is like being held in a time machine. “Am I a living creature or am I dead?” you wonder!

The car I was in got shot by a sniper high above. The street is the same long street which I walked all along on my way home years ago, penniless. There, a sniper shot on me but I did not die. Only a speeding car got scratched. We took sideways where ghosts were hovering and laughing. I heard the sound of bullet pierce materials, objects and bodies. I started feeling my back with my hand. A short attack of panic has hit me. I thought the bullet has gone through my body. I saw blood shed; their blood shed, and started to play the role; the role of how my spirit will emerge from my body. It was important that I master the act of dying, that I do not get confused in front of them, and that I do not look like a stupid martyr.

The Syrian Arab Army took its fighting positions as does the Israel Army; ready to shoot and hide in waiting, scared of the unarmed demonstrators. I saw soldiers sitting huddled under bridges, like the embryos of the devil. After the day of Good Friday, the countryside of Damascus, of Homs… all of Syria, turned to be a vast plain where thieves roamed, as was Russia according to Chekhov.

In Homs, a soldier would hide behind a barricade of sandbags. At a traffic light, he would seem on the verge of sniping whoever looks at him, as if the outlook would reveal him to be a demon, or his slow transformation into one.

I was shaking like a chick that knows well it will face slaughter at due time. But the stupid investigator, who was not fluent in using the computer, performed a careful inspection in front of his staff after he had asked me to run my laptop. He then announced me not guilty. Syrian Baath Party does not grant the security personnel any technological tools. It supplies them with batons, bullets, adhesive tapes and nails instead.

The security officer said to me: « I do not want to carry a gun. They have forced me to. I am afraid of the protesters. »

The captain: “Who are they?”

I: “The demonstrators. Those who are calling: “Freedom, Freedom.”

Captain: “What else did they cheer?”

I: “They did not cheer. They carried canvas placards neatly hand written, saying: “Keep the hands of Maher al-Assad away from the people.”

I: “No. Definitely not, Colonel”

The Captain, beaming with pleasure: “I am a captain. I’m not a colonel.”

I: “Hope you will become a General, Sir. I do believe his Excellency Dr. Bashar al-Assad has canceled the emergency laws. Why am I here so?”

Captain: You are hallucinating. Who is this Bashar?”

I: “Bashar the devil, the one who terrifies the cactus plants in the poor groves of al-Mazza.”

Captain: “We are all Bashar.”

I was released because my husband belongs to a “minority” group.

An hour after my release, I felt devastated by the impact of psychological torture, the scars of which accompanied me for the next three years. My passport carried a personal photo with no characteristics. A photo that did not look like me, nor did I look like it. My mirror reflected a she-wolf eating its own hand. I am a corpse with a neutral smell, like the smell of a pink eraser at an hour of extreme hunger at school.

If I know that the world would be a world of murderers, I would have shouted:” Come back comrades. Eat my body, but do not go away. The revolution is not there! It is only in poor quarters of Damascus. Only the hungry ones get eaten by the monster.”

A journalist investigated me. I knew he was in direct contact with the office of Buthaina Sha’ban, so I lied about my true political opinion, since most of the foreign media is Syria is monitored by a staff cooperating with the security. He said to me: “shut up! The telephone was laid down open throughout our conversation”. I did not ask him which branch of security was on the line. I just whispered to him: “They have hung up a long time ago. Do not worry. Our discourse is not dubious”.

I am Sarah Jamil. My chestnut-color hair is left to the turbulent wind: “Go! Do not go! Go dead!” I; who know nothing about the revolution. My thin summer shirt was pulled by one of the security men at the check point on the main road between Homs and Damascus countryside on the one hand, and Damascus city on the other. There, near Tropicana swimming pool, or in front of October Liberation War Panorama; the museum of victories against the brutal enemy, the Syrian regime has defeated those who survived the massacre of the eastern Ghawta , and most of them were arrested. My hair was flying. They were waving to me. They wanted me to shoot more pictures. Hey you rebels of Saqba, ‘Ain Turma, Kfur Baṭna, Ḥarasta, and Dōma … I am your sister Sarah, killed by the jailer and sent me to whore city. I’m still bridling my fear at every checkpoint, and in every siege I put a stone in my mouth and chew it, in order

not to divulge anything. I am Sarah Jamil; my body is a sacrifice to the crows. Will you return from the dead?

I heard strong voices saying to me: “Hey Sarah, Fear not! Pretend you are scared of us, and the curse of your death will be gone.” I used to shudder and lie, claiming that I was against you. The Dochka was just in front of me while long lines of tanks plowed the ground. Before that, I walked with a bag on my shoulder trying to get out of the repeated siege. The sniper looked at me with a gun in his hand that can easily turn me into a net fit for catching butterflies. I waved to the soldiers, the killers, as a confident traitor. Then the fourth brigade stopped me at the barrier. My bones hurt. Then, after his accent broke my silence, I told him that the armed gangs will burn this country, so he should let me free from detainment and humiliation. He then left me free to proceed to Damascus.

I was thinking of love, of kisses. But now I am a body with big bruises, a body that is bulged whenever I am sad, and shrinks in moments of joy.

I am Sarah the frustrated, Sarah the hungry, Sarah the dead. Did you find my body between the bodies laid in the mass grave? I myself am looking for it since that day. I want to kiss it, hug it and then bury it. Please, do not wave to me again, for I still believe the regime of Bashar al-Assad’s can watch me. I am in constant state of personal disorder. I have NOT left my home for two years now. Bury my lost body in the countryside.

I arrived to the center of Damascus. Everything is normal. The civilized leisured city faces cannot bear any less. I am angry with myself, as well as with all those faces that might utter to me one sentence: “You do not have the luxury of detainment”. What a curse has my speaker coated his tongue with! I answered with equivocation: “Let us talk about that night, clad with darkness; Modigliani has spent with Anna Akhmatova.”.