‘I Just Had to Go Back’: Syrian Repatriates Speak of Return – by Hashem Osseiran

Some 31,000 Syrians have returned to the war-torn country from abroad this year and many are struggling to survive in a country they call home.

BEIRUT – He never thought about seeking asylum in the U.S. or Europe. For Taym Abed al-Rahman, even the Turkish city of Kilis – the closest to the Syrian border – was too far from home.

Eyeing his hometown of Tel Rifat in Aleppo’s northern countryside, the 23-year-old activist returned to Syria only three months ago, leaving behind a life as a refugee in a Turkish camp near the Syrian border.

He is one of 31,000 Syrians who have returned to the war-ravaged country from abroad this year, to seek out family members or check on property. Hundreds more crossed into rebel-held areas of Syria from Turkey on foot ahead of the Eid holiday last month. Ankara has given the refugees the right to return within 30 days, but many have chosen to remain in Syria despite the ongoing war.

Syria Deeply spoke to three Syrian repatriates living in rebel-held parts of Syria and found them desperate for money and resources, making as little as $50 a month. They would not advise their families to return, but they say they don’t regret coming back as long as they are resisting the Syrian government.

From a Model Camp to an Aleppo Flashpoint

Abed al-Rahman fled Tel Rifat in August 2012, after the government launched a fierce airstrike and artillery campaign on rebel positions in the town. He settled in a refugee camp in Kilis, which has been hailed as one of the most organized and orderly settlements in the region.

He had access to around-the-clock electricity and water services. He boasted about never having to live in a tent. Instead, he lived inside a 23-by-10-foot (7-by-3m) trailer with three rooms along with 15 other people. He was given a debit card when he registered, and every month, he got a balance of roughly $50 for food and sundries. “Life was very good in comparison to other refugee camps,” he said. “It had provided us with all basic amenities.”

Weary of tough working conditions in Turkey, however, Rahman said he started longing for home, especially after a Turkish tailor he had worked with for three months refused to pay him a salary. “After that, I promised never to work in Turkey again and I decided to go back to Syria,” he said. “At least there, I would be working for my own people.”

He has been living in the northwestern town of Azaz for the past three months, providing aid and services to towns and villages in Aleppo province that have recently been liberated from the so-called Islamic State. Though he says he does not regret his return, he concedes that repatriation is not what it is made out to be.

He says that he is terrified by the string of bombings that have targeted his town in recent months. Just last week, a car bombing shook his neighborhood and killed at least four people. “I was so close to the explosion. It was God that saved me,” he said.

He is concerned that Kurdish forces based in nearby areas will launch an attack on Turkish-backed rebels in his town, following a series of clashes that have broken out between the two groups in a nearby village earlier this week.

What’s more, he says unemployment in the overpopulated town has skyrocketed following the influx of displaced Syrians who have fled the nearby cities of Manbij and Aleppo. He says that work is hard to come by and the cost of living in Azaz has become even more expensive than Turkey. He pays more than $15 a week for water and more than $50 per month for electricity. “There is no way my family can come back to Syria,” he says. “I have no way of supporting them.”

Returning to a Revolution

Abou al-Izz al-Dimashqi almost did not return to Syria. The 20-year-old media activist from Aleppo who had fled to Turkey with his family in January of this year, said that it seemed like everything in his life was trying to keep him from returning home.

His 8-month-old niece, whom he had helped raise after his brother was killed by a barrel bomb in Aleppo last December, had just started calling him “baba” (dad). His 60-year-old mother, gripped by grief over the loss of her eldest son, was in a chronic state of depression.

“How could I tell her I wanted to go back to Syria and back to my revolution?” he asked rhetorically. “How could I accept being the reason behind her sadness?”

But news from home had compelled him to leave Turkey: The Syrian government was pounding rebel positions in Hama’s northern countryside and the Eastern Ghouta suburbs of Damascus. It was also accused of carrying out a chemical weapons attack on Idlib – the only province in Syria under full opposition control. “When I saw all of this, I knew I had to go back,” he said.

Overtaken by a sense of profound duty, he crossed into Syria from Turkey on foot last month. He could not return to his hometown of Aleppo, which is now under government control, so he settled instead in Kafr Karmin – a rebel-held village in Aleppo’s western countryside near Idlib’s provincial border.

These days, he lives in a 4-meter-wide (13ft) tent with six other activists. He spends most of his time volunteering with local NGOs and organizations, which distribute aid to nearby refugee settlements. He does not have a salary but says he lives off of donations and aid he receives from the organizations he works with. On average, he makes around $50 a month.

He also avoids talking to his mother more than once a week. “I don’t want her to get very attached to me,” he says. “I know I’m going to die here someday so I want her to get used to the distance.”

Though he says he is happy to be able to give back to his country, he describes a precarious life marked by grave threats. He says he has not left his tent in four days. Rebel infighting in nearby Idlib this week has made the situation untenable. He speaks of kidnappings, killings and arrests. He is scared to go out and buy food. “This security situation doesn’t allow for my family to come back,” he says. “What would I do if my father is kidnapped on the streets, or worse?”

At first, it would seem like Nizar al-Omar had won the golden ticket. In July 2016, the 25-year-old activist from Aleppo had obtained a German residency permit and was in the process of securing a scholarship to pursue a master’s degree in Arabic literature at the University of Berlin. Life in Germany, he said, was very good: The people were kind and helpful, his living conditions were stable and he was being given the chance to pursue his education. Then, the government’s siege of Aleppo started.

His return to Syria, he says, was a matter of principle. He could not sit idly in the security of his home in Europe while the residents of Aleppo were being “massacred” by the Syrian government. As a result, he returned to the outskirts of Aleppo at the height of the government siege in October of last year. He fought with Syrian rebel groups outside the city until January, when he was bused to Idlib province along with other fighters.

These days, he is struggling to find work. He says the situation in Idlib is especially severe since the province has become the only refuge for more than 900,000 Syrians displaced from other parts of the country.

When asked whether he ever regretted coming, he answered with a resounding no. “I do not think that way. Maybe at some point, when the war is over, I may return to Germany, but for now I am needed here and this is where I’m going to stay,” he said. 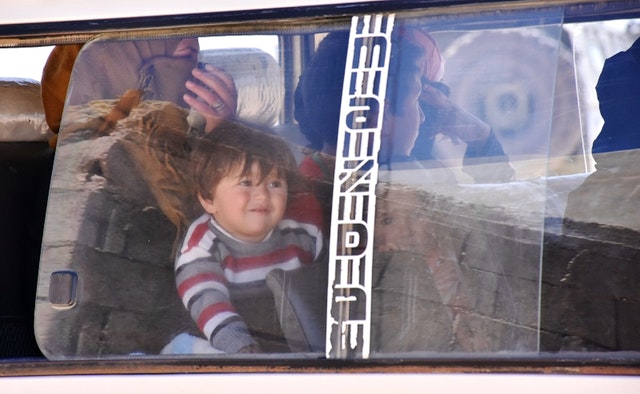 Syrians who fled Aleppo due to the fighting prepare to return to their hometown under the supervision of members of the Russian military police in the northern city of Manbij on April 5, 2017.AFP/George OURFALIAN

Hashem is the deputy managing editor of Syria Deeply. He has previously written for The Arab Weekly and The Daily Star. He has also worked with the Associated Press, where he focused on user-generated content. Hashem holds a masters degree in Middle East Politics from the School of Oriental and African Studies, at the University of London. He is a native of Beirut, Lebanon.