I know Assad. And I know it’s time to arm the Syrian rebels – and bring him down

IFIRST met President Assad on a trip to Damascus in 2006. I had asked the Syrian Embassy in London to arrange for me to meet senior Syrian political leaders, but on arrival in the capital, was surprised to receive an invitation to meet the President at his modest private house, away from his palace where he meets most dignitaries. 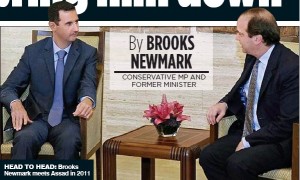 For a man now reviled for massacring his own people, Assad is incongruously softly spoken. But he was always forthright, did not seem to mind that I gave equally forthright answers and regularly invited me to meet him again on subsequent visits, right up to 2011, when the civil war started.

While I abhor the Assad regime and its hostility towards Israel (I am Jewish), I have a longstanding interest in Syria and the Middle East and am a firm believer in the adage ‘Diplomacy becomes a little lazy if all you do is talk to your friends’.

Over a period of about five years, I met Assad several times, always one on one. (I also had a remarkable private meeting with his English-born wife, Asma, which I shall return to later.)

Assad’s answers to my questions were instructive and at times shocking in their directness. When I asked him what was his most important objective, he replied in two words: ‘Regime survival.’

This was quite different from his public utterances at the time about seeking political reform. I told him there is a complete contradiction between reform and regime survival, but he could not answer this question. As events have now shown, he is willing to destroy Syria completely and kill its people in vast numbers to protect his family.

In effect, Syria is a mafia state. This is reflected in the bipolar posturings of Assad. When he told Western leaders he wanted political reform, I believe part of him meant it. But when the door closed and he was surrounded by his cronies, regime survival at all costs was all that mattered.

I also asked him why he supported the Lebanese-based Shia terrorist group Hezbollah. As we saw last week, Hezbollah’s military support for Assad played a key part in his forces winning back al-Qusayr, one of the Syrian towns captured from Syria’s rebel Free Syrian Army (FSA). In a reply of astonishing and brutal candour, he made no attempt to deny his support for Hezbollah and admitted he had used them as a proxy to attack Israeli forces.

He said: ‘I am weak both economically and militarily. I cannot take on Israel directly. They are much stronger than me. It makes more sense to use Hezbollah to put pressure on Israel.’

He was just as unapologetic when I asked him why he had allowed insurgents to pass through Syria freely during the Iraq War in order to attack British and American soldiers.

I said to him: ‘You must know the people you let through your border are only going there to try to kill our soldiers?’

He replied in a totally matterof-fact way: ‘If they want to get themselves killed by your soldiers that’s up to them. If I don’t let them go through they may turn on me and start a revolution to get rid of me. Remember what I said earlier: regime survival is the most important thing for me.’

In other words, he feared if he didn’t let them through, they would turn their guns and bombs on his own vulnerable government. For Assad, it always comes back to regime survival.

Certainly, I will never forget the remarkable conversation I had with his wife in early 2011. Again, we met one to one, at her own private house in Damascus. Naturally, we had tea. As we chatted, she said something quite extraordinary. As I had expected, she was keen to talk about her husband’s reform agenda.

I said I had met President Assad many times and that

Aalthough he talked a lot about political reform, he never did much to bring it about.

I said to her he could be like the founder of modern Turkey, the great Ataturk, bring about real reform, step down from office and be lauded for his achievements.

I had not anticipated her reply. She said: ‘That is what I hope he does too, serve one more term in office and then retire.’ All hope of that is now gone. When the Arab Spring reached Syria, it did not surprise me that Assad’s regime would respond in the ruthless way that it did. What has surprised me is how quickly a sectarian war has evolved and the progress the opposition has made. ONCE-beautiful country is quickly disintegrating into a fragmented Somalia on the Mediterranean. I understand the concerns of those, including fellow Conservative MPs, who say we should not arm the Syrian rebels and help them bring down Assad and that we must not be dragged into another Iraq or Afghanistan. But I believe they are wrong. This is not Iraq: in Iraq there were no chemical weapons. In Syria, we know for sure Assad has used them. We sent thousands of British troops to Iraq. No one is suggesting sending a single British soldier to Syria.

Nor is this Afghanistan: the silent majority of Syrians are secular not Islamist. This is more like Bosnia or Libya, in which a brutal dictator is murdering his own people in order to stay in power. To date we have seen almost 100,000 killed, 1.1million refugees fleeing to neighbouring countries and more than seven million displaced internally.

On the one side we have the Assad regime, which has 300,000 well-armed soldiers, the violent Shabiha secret police, 16,000 pieces of heavy artillery, tanks and an air force that is unchallenged in the skies.

They are supported by Iranian and Russian money and arms, and 7,000 Hezbollah fighters.

On the other side we have a highly fragmented Syrian rebel force, 35,000 fighters equipped with small arms under the banner of the FSA.

While the West, scarred by Iraq and Afghanistan, prevaricates, 20 million Syrians face genocide. If we do nothing, instead of 100,000 dead we could see 300,000 dead a year from now. Russia is threatening to send S-300 surface-to-air missiles and surface-to-ship missiles, which not only threaten Israel but also the West’s Mediterranean fleet.

The Syrian rebels urgently need their own surface-to-air missiles and tank-busters to have any chance of winning. Britain can and should supply them with them. We could train them how to use them in Jordan or Turkey.

I hope and pray a peaceful resolution can be found to this bloody dispute. But if it cannot, we must lift the arms embargo to send a powerful message to Assad that this will no longer be a one-sided war.