« I was prepared to lose someone in my family, but not all of them » – By Loveday Morris

In a hospital in Lebanon, the casualties of the Syrian uprising recount tales of loss and woe 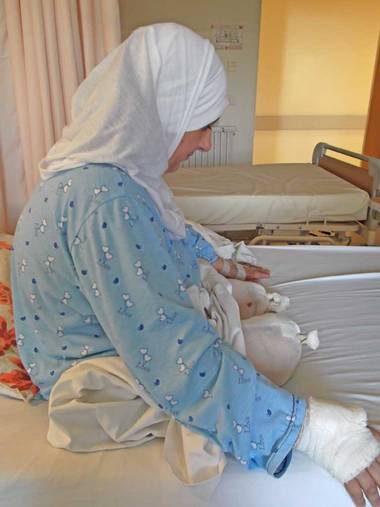 « Baba Amr has only two doors, one to death and one to freedom, » reads Manar’s latest work, scrawled on a piece of paper in red and black marker pens and tacked to the wall opposite his hospital bed.

The doctors have been encouraging him to write poetry to help with the psychological trauma, but the 17-year-old Syrian is obviously far from coming to terms with what happened to him back in his home district in Homs.

« I can’t imagine the future, » the teenager says, staring down at the empty space beneath the sheets where his right leg should be.

The 40 beds on the third floor of the Tripoli Governmental Hospital in Lebanon are now exclusively filled with Syrians injured in the conflict, earning it the nickname the Syrian Field Hospital. It is here that the ambulances bring the most seriously injured who arrive at the Lebanese border after risking their lives on perilous illegal crossings. The International Committee of the Red Cross said last week that it had stepped up operations in Lebanon after a significant increase in the number of seriously injured Syrians entering the country. More than 300 casualties have been evacuated so far this year, compared with 177 during the whole of 2011. From Free Syrian Army fighters to women and children, the stories of the patients in Tripoli have a familiar ring, but each one is heart-breaking.

Manar had run to help pull out the wounded after a mortar attack, when a Syrian soldier unleashed his machine gun. His right leg was so badly riddled with bullets it had to be amputated above the knee.

In the room next to Manar, 15-year-old Khaled lies paralysed after taking a bullet in the back. His grandparents have yet to break it to him that his injury is permanent. « I hope to be able to walk again, and for that dog Bashar to die, » he says.

« We’ll kick his ass for you, » quips a 24-year-old Free Syrian Army officer in the next bed, who plans to be back fighting in a few weeks when the bullet wound to his hand heals.

Though they receive expert medical care while at the facility in Tripoli, the doctors worry for the future of their patients after they are discharged. There is little provision for long-term rehabilitation and they join the ranks of the 24,000 Syrian refugees in Lebanon who are struggling to survive with little government or international assistance. Fewer than half have been registered by the UN Refugee Agency and most rely on the kindness of communities, mosques and Islamic foundations to avoid sleeping on the streets.

For Dr Ahmed Abu Jawad, the connection to his patients runs deep. The Syrian has been working on the ward for 40 days, after fleeing a Baba Amr field hospital during the notorious month-long siege of the neighbourhood in Homs. When asked about the worst case he has seen, Dr Abu Jawad nods his head towards room 316. « Her story – it’s too hard, » he says.

Inside, 38-year-old Hasna brushes off her injuries. « I’ve lost my legs but it doesn’t bother me; it’s the other things I’ve lost that mean more. »

She describes how she and her family fled their village in provincial Homs when they heard the Syrian army was about to launch an offensive. They were returning home several days later when a tank shell hit their motorbike.

« My husband was driving, our three-year-old son between his legs and me on the back holding our one-year-old daughter, » she says. « There was flying metal and dust and I saw my baby daughter’s head opened up in front of my eyes. I felt her last heart beat. I won’t forget that moment for as long as I live. »

Her son had his leg blown off and also died at the scene, while her husband succumbed to his injuries during the journey to Lebanon. « I had prepared to lose someone in my family in the revolution – you steel yourself for it. But I had not prepared to lose them all, » she says.