A JOURNEY OF IDEAS ACROSS

IN DIALOG WITH EDWARD SAID 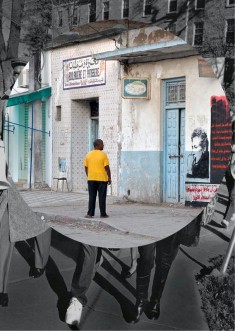 As an influential theorist and public intellectual, Edward W. Said has produced a body of work that has retained its resonance in a variety of fields and areas worldwide. On the tenth anniversary of his death, this interdisciplinary symposium seeks to interpret his work – from « Orientalism » (1978) to « On Late Style » (posthumously, 2006) – with a view on cultural and political realities today, including those in the Arab world.

Edward Said’s ideas and observations on knowledge production and representation, time, space and travel, on the relation between power and weakness, on agency, engagement and generosity remain especially valid. They continue their journeys across territories, to be read and adapted outside the walls of academia as well. Said’s portrait appears in graffiti in the streets of Tunis, while intellectuals in Syria and Turkey draw on his critical thought. His influential interpretation of imperialism is applied to the global economy. And his views on migration movements and cultural crossings find expression in current theoretical and artistic positions. This way, the Palestinian-American thinker has left his mark in the realm of art and culture as well. Musicians as well as literary and film critics worldwide refer to his numerous writings on music, literature and film, culminating in his treatment of the “late style” of great artists.

Right from the outset, in its very topics and formats – from lectures to conversations, performances, and film screenings – the symposium takes Said’s interdisciplinary method of inquiry and his fundamental criticism of dichotomies in the context of intercultural exchange as an occasion to subvert binary structures and assumptions of polarity.

Curated by Adania Shibli with Akeel Bilgrami and Katrin Klingan