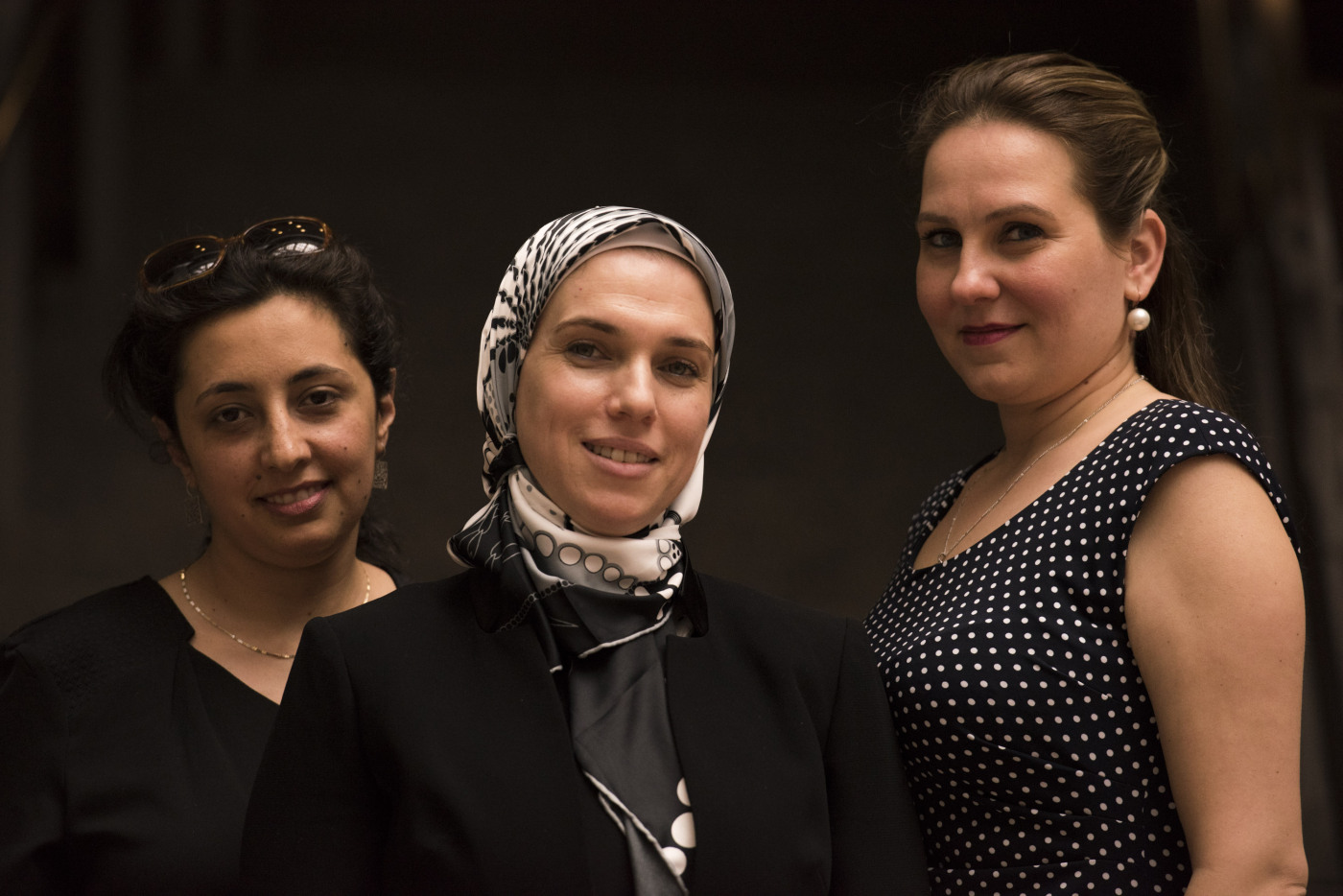 Houda Atassi was working as a civil engineer in Homs in western Syria when the uprising against Syrian President Bashar al-Assad began. In April 2011, as protesters began gathering in Homs’ Clock Square, Atassi joined them. Like many women, she brought her children along. For hours, she said, people stood and peacefully protested, for “freedom, justice, dignity, and pride.” Around midnight, regime forces began shooting.

“I saw the first man killed. He was killed in front of his wife and children. My children were so afraid. We left, running to the car,” said Atassi. Though they escaped unharmed, she said, “this made me look for victims of the regime … This is when I decided to help.”

As the protest and violence by government forces escalated, Atassi began volunteering for International Humanitarian Relief, an NGO that provides emergency aid to vulnerable populations. Her family volunteered too. In late 2012, her son, who was then 17, was detained at a Red Cross checkpoint in Homs while en route to distribute supplies to protesters. He was released only a week later. “Then myself and my family received direct threats for our humane work,” said Atassi. “That’s when we decided to leave.” 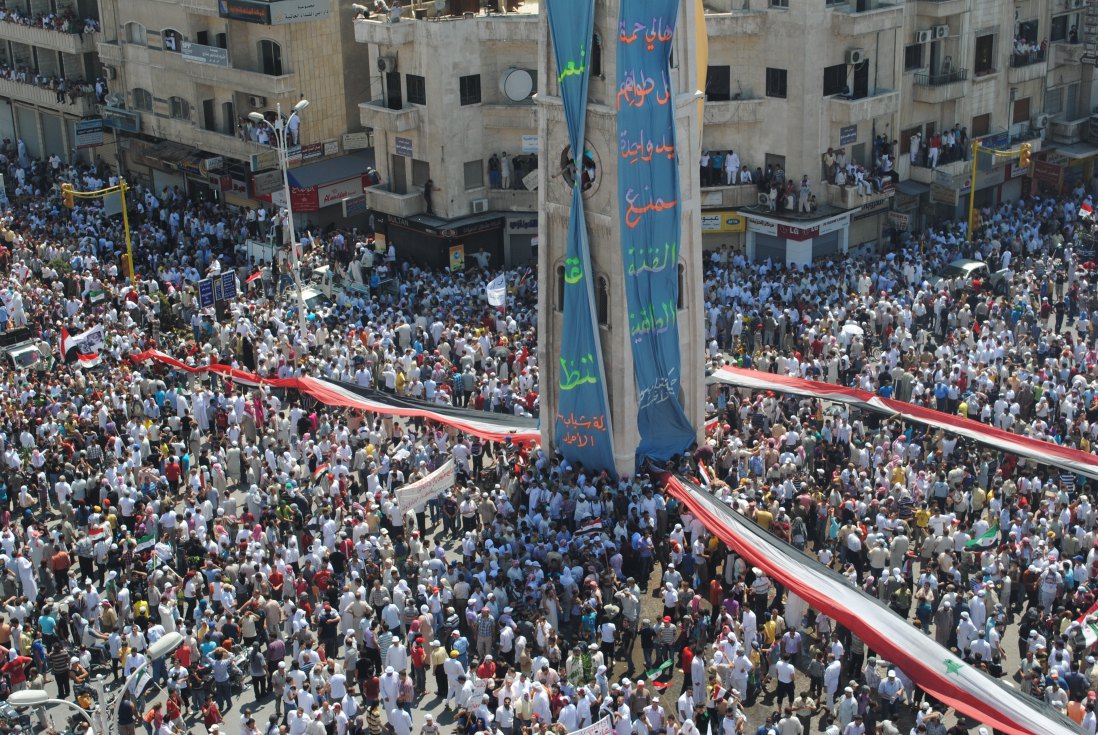 Syrians demonstrate against the government after Friday prayers in Hama, north of Homs, on July 29, 2011. (AFP/Getty Images)

Atassi, of course, is not alone. According to the United Nations High Commissioner for Refugees, over 3 million people have now fled Syria’s civil war, while 6.5 million are displaced within the country. The majority of those displaced are women, according to UNHCR numbers.

This week, Atassi, along with two other female Syrian humanitarian workers who also fled the country — Sandra Bitarova and Mariah Abadeh — were honored in Washington D.C. for their work by CARE, a leading humanitarian organization. All three women continue to direct humanitarian work inside Syria or work with Syrian refugees in the surrounding countries. The women received the award amid ongoing negotiations to extend an uncertain ceasefire in Syria, and less than a week after government airstrikes hit a hospital in Aleppo, leaving at least 200 civilians dead.

Speaking at CARE on Tuesday, Bitarova, who lived and worked in Homs and Damascus as a media buyer for an ad agency before fleeing the country in 2012, expressed how difficult it was to observe the Syrian civil war drag on. “We watched Tunisia and Egypt and thought it would take a little longer in Syria, maybe three months. Now it has been five years,” she said.

Before fleeing Syria, Bitarova told Women in the World, she was detained twice for getting involved in humanitarian work there. This included connecting protesters with media outlets to share videos of their demonstrations, and distributing supplies, such as baby milk, in central Homs. The first time Bitarova was detained for only 24 hours. But the second time she said she was held for 35 days. While in jail, she said, “I kept hearing people screaming out of torture, and smelling burning flesh.”

“I am one of the lucky few who didn’t get physically tortured, but there was psychological torture,” she said. “They were saying: ‘You will be next’ and ‘Where is your sister? We hear she is active too.’”

After being released, Bitarova said she received information from a government agent, who later defected, that she would be arrested a third time. This time, the agent said, she would not be released. “He said you have two days to vanish,” according to Bitarova. And so, in August 2012, she and her sister fled the country.

Atassi, Bitarova and Abadeh now continue their humanitarian work outside Syria, although they regularly communicate with staff on the ground via Skype, Viber and Whatsapp. The women described a continued lack of basic services in many areas of Syria, random searches and arrests by government forces, millions who have lost their homes, children who have never been to school, and no recourse for government violations. “Anybody who does open a mouth is detained and tortured, eventually leading to death,” claimed Atassi.

While Atassi said the general atmosphere of fear increased after the extremist group ISIS — or Daesh, as it is known in Syria — began seizing large parts of the country, the main terror remains Assad’s forces.

In 2013, Atassi saw this firsthand, when a member of her staff at International Human Relief was arrested by Syrian government forces and held in detention for six months. The staff member had been trying to distribute medical supplies. “For [those six months] we were trying to reach them. But they were not able to tell us where they are. [The government forces] told us lies. Later, we got information,” said Atassi, who began to cry, “that they died because of the level of torture.”

According to the NGO Human Rights Watch’s 2016 report on Syria, government forces continue to carry out torture and random detentions. Serious abuses are also taking place at the hands of ISIS and other non-state armed groups, the report said.

Former Under Secretary of Defense Michele Flournoy, who spoke at the CARE event, said women in Syria face particular stressors from the country’s civil war. “There is rape, violence, homelessness and medical issues,” she said.

Atassi, Bitarova and Abadeh are all focusing some of their humanitarian efforts on Syrian women. Abadeh, who now lives in Germany, works for the nonprofit WomenNow, which exclusively focuses on empowering Syrian women. “In my experience,” she said, “when you are working with women, you are working with the whole community, because women are the ones who are thinking about the elderly, about children, about every detail.”

Studies over the last two decades have shown a correlation between the status of women and girls and larger impacts on society, particularly in terms of economic development.

Atassi, who is now a regional head for International Human Relief, said they are giving women agricultural assistance to develop sheep and livestock farms, to help “rebuild the circle of life” in Syria. She smiled wanly as she said this.

As she spoke, renewed fighting between rebel and government forces left two dozen dead in Aleppo. The most recent death toll numbers, released by the Syrian Center for Policy Research in February, found that more than 470,000 people had died since the civil war began.

“But we always have to have hope, because without hope, we are not going to be living creatures,” said Atassi. “Our hope is to get rid of this crisis and this war… But I implore the world community to stick to their resolution to get Assad out, because as long as Assad is there, the problems are not going to end.”