In Syria, an oasis from the war – By Austin Tice 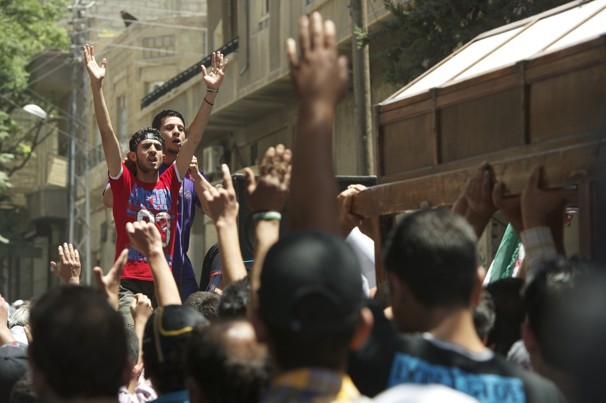 Austin Tice/For the Washington Post - An activist, whose brother was killed in fighting several months ago, leads a funeral procession in revolutionary chants in Yabroud, Syria on July 7, 2012. The funeral was for a rebel fighter from Homs who was evacuated to the hospital here but ultimately succumbed to his wounds.

YABRUD, SYRIA — The flag of the revolution flies high above this prosperous town in southwestern Syria. Each week, thousands take to the streets to demonstrate peacefully. Rebels roam freely — but without weapons.

The government of Syrian President Bashar al-Assad has lost control of Yabrud. But unlike Homs, Hama and countless other places where pro-Assad forces have unleashed furious assaults to keep their grip amid a 16-month-long rebellion, Yabrud appears to have been given up to the rebels. Here, at least for the time being, the revolution has been won. And it was won without a fight.

Aside from a brief foray into town in late December, the army has yet to attempt to occupy Yabrud. “They came here for a few days, but then they simply left. There was no significant battle,” said Abu Mohammed, an anti-government activist who asked that his full name not be used.

The result is an oasis of calm amid a conflict that the International Committee of the Red Cross formally declared a civil war on Sunday, one that has claimed at least 14,000 lives. It is a place that speaks to the limits of Assad’s power to control this nationwide rebellion, as well as the hopes of activists who believe the uprising can achieve its goals without dragging the country even deeper into strife. 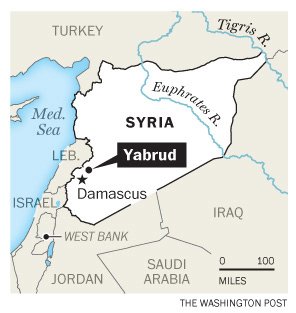 Yabrud’s idyllic farms and bustling urban life stand in stark contrast to much of the rest of the country, where war has become a daily reality. Sixty miles to the north, the city of Homs has been the site of some of the fiercest fighting, leaving entire neighborhoods destroyed by tank and artillery fire. The Damascus suburb of Douma, 30 miles to the south, has become a flash point in the battle to control the capital.

In areas that fall under the rebels’ sway, the pattern of pro-Assad forces has been to storm the town, expel anti-government fighters and go door to door, taking revenge. But not in Yabrud — at least not yet.

“It is simple,” said a local rebel commander, a defected artillery lieutenant from the Syrian army. “The army is fighting in Homs and in Damascus. They do not have the strength to also fight in Yabrud.”

The rebels don’t want a fight here, either, and have gone to great lengths to avoid one.

Abu Mohammed, the activist, credits Yabrud’s calm to a more restrained approach to revolution than that displayed by other Syrian cities. When a pro-government militia known as the shabiha has periodically caused trouble in Yabrud, the response has been deliberately muted.

“They broke into many houses, my father’s house, stealing and breaking things. We did not react strongly,” he said. “We did not want to bring the war here.”

When a prominent Yabrud-based activist was arrested two months ago, the rebel Free Syrian Army, known as the FSA, responded by kidnapping a general’s son and quietly negotiated a prisoner exchange.

FSA forces do not openly carry weapons within Yabrud, only at the rebel checkpoints that ring the town. “We didn’t want to upset the people in the town, make them afraid,” Abu Mohammed said. “Life here in Yabrud is normal.”