In Syria’s Civil War, Doctors Find Themselves in Cross Hairs – By Neill MacFarquhar and Hala Droubi 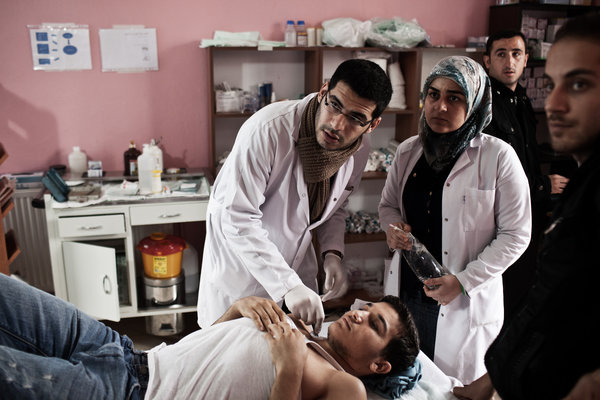 Dr. Housam Moustafa, a surgeon in training, treated a Syrian rebel at a clinic in Reyhanli, Turkey.

GAZIANTEP, Turkey — Six months after Syrian secret police officers led Dr. M. Nour Maktabi away from his Aleppo clinic, the morgue at the university hospital summoned his family to collect his corpse.

At first glance, his three brothers thought it was a mistake. When they had last seen Dr. Maktabi, in May 2012, the 47-year-old chest specialist weighed a doughy 200 pounds. The dead man was covered in wounds and emaciated, weighing less than 100 pounds — “a bag of bones covered in flesh,” as his younger brother Wadah put it.

But on closer inspection, the brothers found Dr. Maktabi’s name inked in small letters on the bottom of one foot.

It was a grim but not uncommon fate for Syrian doctors and other medical personnel whom the government suspects of treating wounded rebels. More than 100 physicians have been killed and hundreds more have disappeared into Syrian jails in the last two years, according to doctors and opposition organizations. The government reviles treating wounded rebels as “akin to carrying weapons,” said Wadah Maktabi, a pharmacist.

Embattled cities like Aleppo and vast swaths of the countryside suffer from an acute shortage of doctors and medical supplies, with the government’s deadly campaign an important factor in prompting doctors to flee. Because of the shortage, all kinds of people with little previous surgical experience — dentists, medical students and nurses, not to mention car mechanics and bakers — are now performing minor surgery.

Numerous untrained volunteers have been talked through operations to the point where they can now extract a bullet from an arm or a leg, but not from more complicated spots like the chest or the throat.

In a report in March to the United Nations Human Rights Council, the Independent International Commission of Inquiry on the Syrian Arab Republic accused both sides of targeting medical care as part of their military strategy. “Medical personnel and hospitals have been deliberately targeted and are treated by parties to the conflict as military objectives,” the report said.

The 10-page report documented a litany of abuses by government forces and rebels: Treatment has been denied on sectarian grounds. Hospitals and clinics have been attacked. The government and rebels have limited care in medical facilities to their own supporters. Doctors and nurses have been forced to accept the bodies of executed opposition fighters and to register them as deceased patients.

“Doctors and field hospitals are being systematically targeted like all revolutionary activists,” Razan Zaitouneh, a founder of the Violations Documentation Center, a Syrian human rights organization, said via Skype from Damascus. “Targeting doctors, bakeries and aid workers is all a way to strangle rebels and their families.”

Doctors Without Borders has also documented how both sides have devastated health care across the battered nation. “Providing medical care was transformed into an act of resistance, a crime, and medical structures became military targets,” it said in a report this month.

Some medical centers established for rebels by the Free Syrian Army barred civilians, which increased the chances of the government bombing them, the doctors’ report said. Both sides also looted hospitals, it said.

Dr. Mohamed Wajih Joumah, a surgeon and the former head of the Aleppo medical association, said that of the 12 large government hospitals in Aleppo, six had closed. Only about 35 doctors are working at or near the front lines, Dr. Joumah estimated, but others put the number at closer to 100. There were once at least 2,000 physicians in the city, doctors said.

Many specialists are missing, including trauma surgeons, vascular surgeons and anesthesiologists. Important diagnostic machines like CT scanners no longer work.

Battle injuries can usually be treated in some form at the 72 field hospitals in northern Syria, Dr. Joumah and other doctors said. But people with chronic illnesses like cancer or new outbreaks of contagious diseases like tuberculosis fare worse.

They rarely find the drugs they need, or if they do, they often face prohibitive costs like $30 per vial of insulin. Aleppo had been the center of Syria’s extensive pharmaceutical industry, but the factories have ceased production.

“The most basic level of health care is no longer available in vast areas of the country,” said Christopher Stokes, the general director of the Belgian branch of Doctors Without Borders.

The execution of medical personnel in Syria accelerated as the peaceful protest movement that started in March 2011 gradually disintegrated into civil war, doctors and human rights activists say. The Violations Documentation Center, based in Damascus, has compiled lists of victims of all stripes.

They include 120 doctors, 65 medical aid workers and 50 nurses killed, and 469 doctors jailed. Some victims were targeted for murder, some were picked off by snipers or killed when medical facilities were bombed.

The Syrian government has made it virtually impossible to seek its response to such accusations. But its standard answer to similar questions has been that it is fighting a terrorist insurgency supported by foreign financing.

Indeed, several doctors who were arrested for long periods but eventually released said that they were repeatedly accused of aiding terrorists.

Dr. Yassir Darwish, 34, a urologist from Aleppo, said that just before his release in January 2012, after six months in jail, he and four other activists were herded into the office of Jamil Hassan, the head of air force intelligence, the most dreaded branch of Syria’s secret police.

Regular protests from the governor of Aleppo and many doctors helped win their freedom before the uprising started there in earnest.

“He gave us a lecture about how the uprising was all a terrorist plot,” said Dr. Darwish, visiting this southern Turkish city to collect supplies for the field hospital he now runs in Aleppo.

Dr. Darwish described a long imprisonment that included torture, an experience echoed by several physicians interviewed for this article.

He said he had been sneaking medicine to field clinics and treating some patients there until the day before his arrest in July 2011. For six months, he said, he was often beaten with bamboo sticks — on the feet or across his back — and tortured with electricity while his interrogators insisted that he confess to caring for rebels.

Some of the worst abuse, Dr. Darwish said, was delivered at one of the main air force intelligence interrogation branches in Damascus, at Mezze air base.

“I confessed to maybe 15 to 20 percent of the accusations,” he said, acknowledging that he had helped organize peaceful protests. “They had no proof.”

Often he was jammed into cells so crowded that the prisoners rationed space — in one such cell he said each 16-by-16-inch tile was allocated to three men and room to sleep assigned in shifts. Everyone hadbody lice.

“The revolution was still in its infancy when we were arrested,” Dr. Darwish said. “They just wanted to threaten the ones who were detained and their friends who were not. Later, anyone who was arrested was killed.”

Dr. Hassan A. Julaq, 39, was an orthopedist practicing in the town of Kafr Nabl, along the main Aleppo-Damascus highway, when about 200 soldiers established an outpost right outside his home.

Although Dr. Julaq had often treated their soccer injuries, they arrested him in November 2011 and accused him of organizing protests, incitement and treating rebels. He, too, was transferred to Damascus, where he said the torture included always having to walk bent over — it took him a month to stand upright after his imprisonment — and being suspended from the ceiling in handcuffs until his wrists bled.

He said he survived partly by thinking of “Al Atlal,” a song by the Egyptian diva Um Kalthoum, whose words compare love to handcuffs: “Give me my freedom, release my hands.”

After the army was driven from Kafr Nabl, Dr. Julaq returned, but most doctors fled northern Syria, he said.