Inside Rukban Camp, One of Syria’s Most Desperate Settlements – by Yasser Allawi

The situation in the Rukban camp for internally displaced persons near the border with Jordan is rapidly deteriorating. International humanitarian groups are close to being overwhelmed, despite local NGOs and rebel groups trying to help out as well. 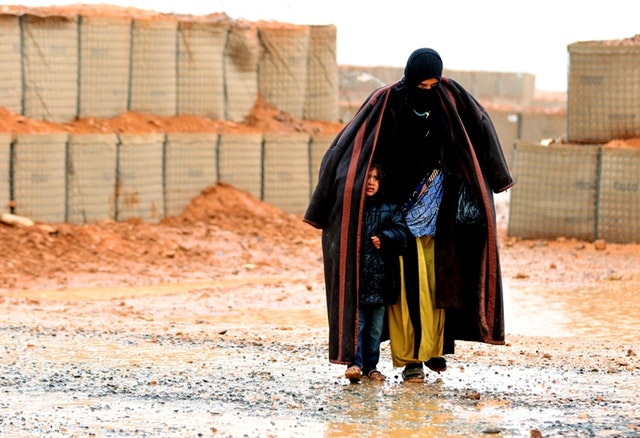 A Syrian refugee from the informal Rukban camp, which lies in no-man’s land off the border between Syria and Jordan, walks in the rain on March 1, 2017. She is sheltering a young child outside a U.N.-operated medical clinic immediately on the Jordanian side. KHALIL MAZRAAWI/AFP/Getty Images30

TENS OF THOUSANDS of internally displaced persons (IDPs) stranded in an informal desert camp between Jordan and Syria have been cut off from aid for months. So far, there are no indications that assistance is on the way.

Humanitarian organizations and the United Nations have had only limited access to the Rukban camp in the berm between Jordan and Syria since its formation. Last year, however, the deteriorating security situation near the border between the two states completely cut off their access, leaving residents almost wholly dependent on sporadic cross-border deliveries from Jordan. These too have now stopped.

According to UNHCR, the last partial aid delivery took place between May and June but reached only 35,000 of the camp’s estimated population of 50,000. The situation has since grown more dire, as hundreds fled to the settlement from fighting in the nearby province of Deir Ezzor. U.N. satellite images from September showed 6.6 percent more shelters than in June.

UNHCR told Syria Deeply that U.N. agencies are ready to resume cross-border operations immediately, but could not comment on whether this would be possible from Jordan in the coming period. Jordan recently stipulated that aid distributions to Rukban camp go through Syria rather than across its frontier.

Speaking to ambassadors of E.U. states earlier this month, Jordan’s foreign minister said the camp “will never be a Jordanian responsibility,” adding that improved conditions in the area would allow Damascus to channel assistance through Syrian territory. The camp is located inside the established de-confliction area around a U.S. garrison in the town of Tanf.

The Syrian government, for its part, has not signaled any intent to provide aid. Russia recently accused the U.S. of using Rukban’s residents as “human shields” to protect its military base in Tanf. Russia’s defense ministry also described the area as a “black hole generating waves of Islamist insurgency.”

The camp is neither completely outside of Syria nor fully inside of Jordan, putting residents in legal limbo between IDP and refugee status, according to the Internal Displacement Monitoring Center. This has also been a challenge for humanitarian groups.

For Imad Abdulsham, a resident of the camp, this led to a “random and unorganized distribution system that is being handled by fighters and the Jordanian military.” As a result, humanitarian groups cannot ensure aid reaches those most in need, he said. UNHCR, however, said that cameras mounted on aid trucks and advanced scanning technology allow for verification.

UNHCR currently pumps water into Rukban from Jordanian reservoirs, but a damaged pipeline has decreased water supply over the summer. Periodic water shortages force residents to purchase unclean water from a privately owned well located roughly 9 miles (15km) west of the camp for the price of $1.50 for 18 gallons (70 liters), according to Abdulsham. He added that the cost can increase to around $4 during severe shortages.

“The everyday reality for women and children living in the camp can be seen on their faces, which clearly show how they have been fighting all day, every day to secure access to water,” he said.

Local Forces Fill in the Gaps

Local NGOs and opposition groups tried to fill the gaps, but, without adequate resources and support, their impact has been limited.

“By operating inside Rukban we are showing other organizations and especially international organizations that it is possible to operate here,” said Fadel al-Madah, spokesman for the Jusoor al-Amal organization, which has operated in Rukban for nine months.

The NGO runs a clinic in the camp to supplement a U.N.-funded clinic roughly a mile away and across the border, and has established three schools nearby. Some 360 students have so far been admitted, but estimates claim there are more than 10,000 children between the ages of 5 and 17 in the camp. The organization also provides bread and water, but cannot meet the needs of all of the residents.

The main security threat to the camp is ISIS, who carried out an attack in the area last year.

Opposition group Jaysh Usud al-Sharqiya (Lions of the East) assists with security in the camp, despite being based outside the settlement. Attempting to prevent militant infiltration, the group deployed forces around the settlement and along the main routes connecting the camp to ISIS-held territory in Deir Ezzor to monitor movement in the area, Raed al-Ali, a commander with the group, told Syria Deeply.

“We cannot crack down on all [ISIS] sleeper cells because we are not active inside the camp, which gives militants room to maneuver,” he said. The camp’s size and lack of management and oversight make it difficult to keep track of infiltrators and their whereabouts, he added.

Rebel group spokesman Younes al-Salameh added that they enter the settlement in emergencies to prevent fighting between residents, offer protection to Jusoor al-Amal and help transport and distribute aid coming in from Jordan. But it has not been enough, he added.

“We started many projects to provide security and protection for residents, but unfortunately, we could not finish our work because of our operations against ISIS and the Syrian regime,” he said, adding that “due to lack of resources, it was hard for us to cover all of these fronts.”