There are more than 11.4 million Syrians who have been forced to leave their homes since March 2011. While much of the attention has focused on the more visible aspect of this tragedy, the Syrian refugees who made the journey to Europe, the majority of Syrians who fled from their homes, 6.8 million people, remain internally displaced (IDPs) inside Syria. Syria has become the country with the most IDPs in the world, many of whom have been displaced multiple times. Unlike the flow of Syrian refugees abroad, which has been reduced after neighboring countries closed land borders in front of refuges, the number of IDPs within the country continues to increase. Every minute, one family flees their home due to ongoing fighting and indiscriminate attacks. The large majority of Syrian IDPs are in need of basic services such as safe shelter, food, water, and health and education services. Despite the limited humanitarian services provided by the international community, IDPs in Syria are not in dire threat of starvation, apart from ones in the besieged areas, due to the generosity and support of Syrian host communities. However, there have also been increasing reports of hostile acts committed by locals against IDPs. In response, an urgent comprehensive response plan to ensure the safety and wellbeing of Syrian IDPs is needed.

On top of the challenges related to services and protection that most Syrians face, IDPs encounter additional challenges due to their displacement. The dire economic situation has increased the dependency of millions of Syrians, especially IDPs, on humanitarian aid. The use of siege warfare and the restrictions imposed by the Syrian regime on humanitarian agencies, limiting their access to areas controlled by opposition groups, have led the starvation and nutrition deficits. Checkpoints and international border restrictions have made fleeing conflict zones more difficult and prevented displaced people in need of protection from escaping to safer areas. Safe access to food, water, shelter, medical care and other essential needs is a daily struggle. A large percentage of IDPs live in makeshift camps and scattered informal settlements where security risks are rampant. Syrian IDPs face a higher risk of being abducted at checkpoints, while displaced women and children also face discrimination, sexual and gender-based violence, and child labor recruitment.

There has been a growing trend where local communities prevent Syrian IDPs in general and those fleeing ISIS controlled areas in particular from resettling in their regions due to fears over them belonging to sleeper cells for the terror group. Pro-regime forces reportedly stopped thousands of people displaced from ISIS controlled areas from entering areas under government control. The IDPs who fled areas controlled by ISIS for the government controlled city of Al-Sweida were allegedly put in collective shelters and not allowed to leave without permissions. A Sharia court in Azaz controlled by opposition groups issued a statement in May forbidding IDPs coming from the eastern areas of the country controlled by ISIS from entering their territory in order to prevent sleeper cells from penetrating the city. The UN issued a statement in response raising concerns about tactic being employed by both Kurdish and rebel authorities. Kurdish authorities were also accused in 2015 of committing several human rights abuses, including the deliberate displacement of thousands of civilians and the razing of entire villages, often allegedly in retaliation for residents’ perceived sympathies with, or ties to, members of ISIS or other armed groups. Some IDPs were also reportedly prevented from returning to their native region.

Although the tactic has been widely criticized by humanitarian groups and activists, there has been a growing tendency for groups to immediately blame all security incidents on sleeper cells affiliated with ISIS. “Part of this is due to the systematic way ISIS has secretly targeted its opponents. Most of the allegedly captured ISIS sleeper cells are locals, because they need to be familiar with the area,” said Raed Mohamed, a human rights activist in northern Aleppo.

Attacks by pro-regime loyalists against IDPs, especially those who are coming from areas not controlled by the regime, are becoming more common as well. A recent series of bombings carried out by ISIS fighters in the costal cites of Jableh and Tartous killed more than 120 people. In response, revenge attacks were carried out against IDPs in several pro-regime bastions, most notably in Tartous, which led to several serious injuries and the destruction of property. “Even though the possibility of such attacks is always high due to the tension and hate speech directed at displaced persons, the regime does not provide IDP camps with enough guards to protect them. Displaced people do not feel safe here anymore,” said Reem Hadad, a humanitarian worker from Latakia. Although some people in regime controlled areas condemned these attacks, the absence of additional protective measures by the Syrian regime will leave IDPs as easy targets to can be attacked with impunity.

An internal displacement crisis as large as the one in Syria cannot continue to be borne primarily by native communities. The international community must examine how they can better address the humanitarian challenges faced by IDPs. Internally, Syrian activists and NGOs should focus on efforts to rebuild the sympathy of local communities towards refugees. All armed actors, especially state actors, must adhere to their responsibility to protect IDPs. These displaced persons are Syrians and should be treated as fellow citizens wherever they go. 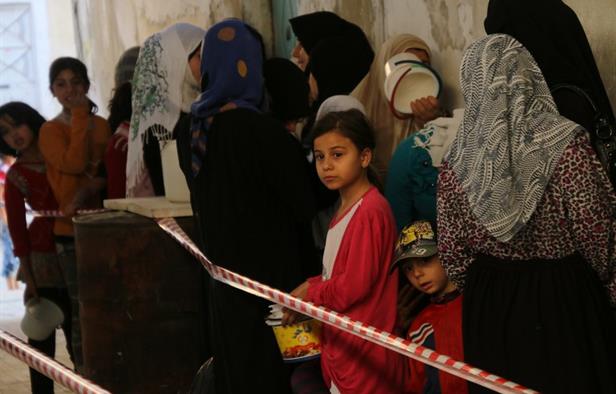 Syrians line-up waiting to receive meals distributed by the « Syria charity » NGO to impoverished families during the Muslim holy fasting month of Ramadan on June 11, 2016 in a rebel-held neighbourhood of the northern city Aleppo. (AFP/Thaer Mohammed)