Is the Syrian Regime Using Rape as a Tactic of War? by AMY FRIEDMAN 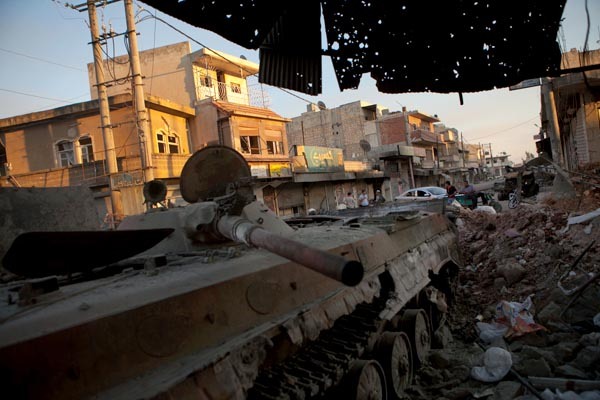 LO / AFP / Getty Images - A destroyed Syrian tank remains in a damaged street in Atareb, in the northern Aleppo province, on July 2, 2012

According to a New York City–based women’s-rights organization, the Syrian government isn’t just using artillery strikes and snipers to crack down on the uprising in its midst. Reports started coming in a few months ago: a Facebook post from a young girl; a shrouded woman in hijab telling her story on YouTube; foreign journalists recounting horrors whispered in refugee camps. These were the stories of women and children raped and abused by Syrian government soldiers and paramilitaries loyal to the embattled Syrian President Bashar Assad. The reports range from tales of groping to gang rape to women being held captive as sex slaves. Some include horrific accounts of women’s genitals being burned or exposed to rodents.

For the past three months, Women Under Siege, an affiliate of Gloria Steinem’s Women’s Media Center, has gathered data on sexual violence in Syria, spotlighting assaults carried out by Syrian government personnel. The group released its findings on Wednesday with a crowdsourced map that it hopes will be an effective tool to catalog and publicize how rape has become a weapon in war. “A lot of that kind of information has been lost to history because of shame, stigma and even death,” says Lauren Wolfe, one of the founders of the project.

The group’s research includes 81 stories of sexual assault reported since the onset of the Syrian uprising in March 2011, with most of the alleged culprits being the regime’s soldiers or shabiha (plainclothes militia). Almost 70% of attacks against women have been by Syrian government personnel, 90% of the women assaulted were raped and 42% of the women attacked were gang-raped. Young boys were also assaulted, with many of these attacks occurring while the boys were held in government detention. It remains unclear whether the culprits were acting on direct orders or of their own accord, but some of the reports include men claiming that they were told to rape the women they capture. It’s suspected that many of the victims have some ties to the Syrian rebellion; their bodies have become another battlefield of the country’s bloody civil war. Some reports claim that rebel fighters have been forced to watch their wives and daughters be repeatedly raped.

Women Under Siege proposes a three-pronged solution to the problem. The map was one of the biggest parts of the project — a visual aid to make people connect with an issue that many may simply turn from in disgust. “It really, literally is putting women’s stories of suffering in war on a map. I think it’s caused people to look more closely at what might be going on as opposed to seeing a story and just turning the page,” Wolfe says. Second, the group hopes to pinpoint hot spots of sexual violence so that aid organizations working in Syria can focus their relief efforts in those areas. Finally, it hopes to gather enough concrete evidence that can eventually be brought to bear before a war-crimes tribunal.

(MORE: Stories of Mass Rape: Sifting Through Rumor and Taboo in Syria)

The use of rape as a tactic of war is hardly unique to Syria: Wolfe cites recent instances in Rwanda, Bosnia and the Democratic Republic of Congo, where either propaganda has blatantly encouraged militias and armies to carry out rape or commanders have turned a blind eye to the practice — something Wolfe says makes them equally culpable. Because of the current situation in Syria, nothing can be proved firsthand, but Wolfe says the group’s research has been painstaking, and only a few of its sources have preserved their anonymity. “It’s really going to come down to who you believe,” Wolfe says. “It’s the sort of thing that has no proof to it — you can’t necessarily see it. A woman may go through surgery, she may become pregnant, she may not. It’s the age-old story: What kind of proof do we need that a woman has been raped?”

Wolfe emphasizes that women who are assaulted suffer much more than just the initial attack. The aftermath of rape can cause anxiety, depression, pregnancy, HIV, STIs and chronic diseases — lingering traumas that Women Under Siege will also seek to document in its research. More than anything, Women Under Siege hopes its study will make people understand the myriad ways war consumes everyone close to it. “It’s not just soldiers, it’s not just people on the front lines [being hurt] … women are really on the front lines at this point.”